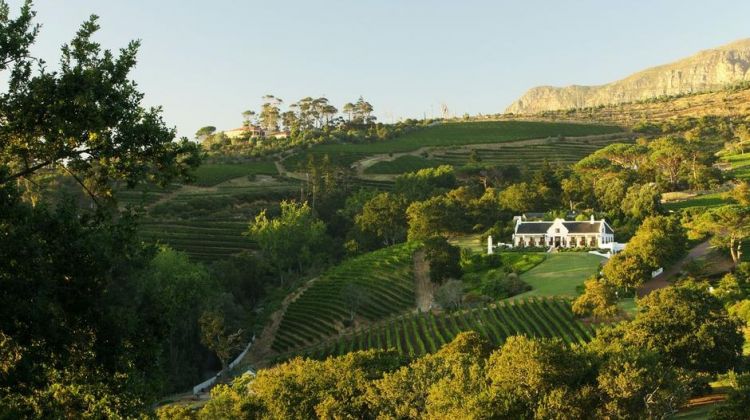 HIGHLIGHTS
Travel back to the very beginning of viticulture in South Africa during this 8-hour tour. Join us on a guided tour of Groot Constantia, which was founded in 1685, learn more about its revered history and know how one man’s love of wine led to the establishment of the first vineyard in South Africa 330 years ago.

This largest wine estate in the region is home to Van der Stel’s (the first Governor of the new Dutch colony on the tip of Africa) original manor house, an excellent example the Cape Dutch architectural style. Apart from that, the name Constantia is also linked with the most famous wines ever produced in this country, which was enjoyed by Napoléon Bonaparte and European royalty in the 18th century. Take a step back in time during a guided tour of the cellar and learn more about this rich history while enjoying a chocolate paired with an award-winning wine.

Travel to Eagles’ Nest next. Cradled in a secluded valley on the slopes of the Constantia Mountain Range, it is part of the World Heritage site of Table Mountain. The wine estate's origins go back to the time when it was used as a refreshment station between the area now known as Wynberg in the east and the harbour of the Hout Bay in the west. Enjoy a leisurely afternoon sipping wine under tall trees while listening to the relaxing sound of a babbling brook.

For your final stop, you will head up the mountainside to one of the highest tasting rooms in the Constantia Valley. End your tour while enjoying a view across the bay all the way to the beginning of the Helderberg Mountain Range.
View More
WHAT'S INCLUDED WHAT'S EXCLUDED
Why Book with Bookmundi
What are customers saying about Bookmundi
Excellent
4.68 Average 345 Reviews

NEED HELP OR HAVE A QUESTION ABOUT THIS TOUR?
If you have any question about this tour or need help with planning a trip, please do not hesitate to get in touch with us. We're ready to help.
Get help
hours 08 From US$ 176 See Group Discount
CHECK AVAILABILITY
Response Time: 2 hours Response Rate: 100% MAKE AN ENQUIRY