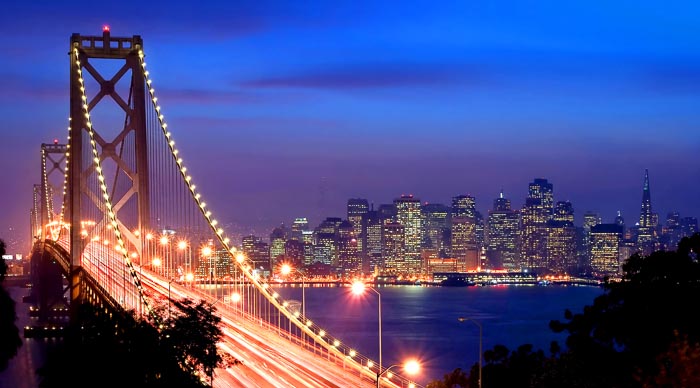 A beautiful bay, cable car rides, breathtaking Victorian homes, a world-famous bridge, fascinating wine regions, dramatic beaches and all possible cosmopolitan delights that you can think of – San Francisco is truly one of the greatest cities in the world.

The presence of micro-climates simply adds to the magic and the land of mystery manages to create an alluring atmosphere that stretches beyond its surreal bay area and infects almost each and every soul. Time is always supposed to be precious while in the city, so make sure that you spend it wisely. Enjoy a cable car ride, explore the Fisherman’s Wharf and stroll around the Presidio neighborhood, but make sure that you don’t miss out on its fascinating cuisines, nightlife and activities either. Here are just some of the top 12 best things to do in San Francisco.

You might remember the bridge as one of the seven wonders of the modern world, but there was a time when the Golden Gate Bridge was famous as “the bridge that simply couldn’t be built”. This iconic attraction is the most famous landmark of San Francisco and it always manages to evoke feelings of romance, mystery and excitement. The bridge is easily identified by its striking orange color and was once known to be the tallest construction in San Francisco. Just seeing the bridge is known to be a holiday highlight for most travelers, but you really need to ride a bike across the bridge to Sausalito in order to truly understand what makes this iconic landmark so famous.

Interesting Fact – The bridge uses two cables, with each cable containing 80000 miles of wire and stretching to 7000 feet in length in order to support the suspended roadway.

What is it that really interests you? An exhilarating bike ride? A fascinating hotel view of the bay? A romantic ferry ride during sunset? An enjoyable walk? A boat tour? A meal with bay views? Irrespective of your preferences, the San Francisco Bay never disappoints. It has something for all sorts of travelers and is also famous as one of the main charms of the city. The ideal way to explore the San Francisco Bay is through a cruise on board luxury catamarans. These trips let you enjoy some of the most beautiful sunset views and introduce you to the friendly sea lions who call the area their home. Each catamaran features a protected viewing area which offers unparalleled 360-degree views as well as trampoline nets for the ones who wish to add a sense of adventure to their cruise.

Interesting Fact – The depth of the bay is just about 12 – 15 feet, making it as deep as any ordinary swimming pool.

The Golden Gate Park tour takes you through some of its main highlights – the Japanese Tea Garden, the De Young Museum, the Academy of Sciences, the National Aids Memorial and the Music Concourse. The Golden Gate Park is one of the most fascinating attractions in San Francisco. It is home to more than 75000 trees and is considered to be larger than the iconic Central Park in New York. Other tour highlights include the California Academy of Sciences, the Conservatory of Flowers, the Historic Carousel and Lawn Bowling Courts.

Interesting Fact – The Golden Gate Park was once known to be one of the biggest sand dune systems in the West Coast.  It only managed to transform into a fascinating park after an engineer brought the barren sand dunes to life by planting trees, shrubs and grass.

Muir Woods & Wine Country full-day tour is bound to end up being one of the highlights of your journey. The Muir Woods are famous for their breathtaking coastal redwoods, while the Sonoma Valley is known to rank as one of the top wine regions in the world. Spend the day hiking through a protected forest and afterwards take a rest while drinking some of the best wines in the US. After arriving in Muir Woods, you can delight yourself with the fascinating natural beauty and enjoy an hour-long hike, before departing for Sonoma County, where you are offered amazing red and white wines, topped off with some dessert wine at the end.

Interesting Fact – Sonoma County became famous as the birthplace of the modern-day wine industry in California. It is home to the oldest continuously operating family winery – Gundlach-Bundschu – as well as the oldest commercial winery in California – Buena Vista.

Segway tours are considered to be one of the best ways of experiencing the magic and passion that the city of San Francisco has to offer. These tours take you through some of the most beautiful and exciting neighborhoods in the city such as the San Francisco Chinatown, Fisherman’s Wharf and North Beach. There are two Segway tours that are particularly popular among travelers – the 2.5 hour night tour and the 3 hour day tour. The night tour covers areas such as North Beach, Washington Square Park, Chinatown, Transamerica Pyramid and Ferry Building and Fisherman’s Wharf and Ghirardelli Square. The day tour includes views of the Alcatraz and the Golden Gate Bridge, Fisherman’s Wharf, Ghirardelli Square, Hyde Street Pier, USS Pampanito Submarine and the Transamerica Pyramid.

Interesting Fact – Did you know that Segways are faster than squirrels? They boast of a top speed of close to 12.5 mph, which means that they can easily outpace a squirrel who needs to huff and puff to reach 12 mph.

The Exploratorium is considered to be one of the most exciting and eye-opening places in San Francisco. It features numerous thought-provoking exhibits which encourage exploration and lead to unparalleled learning. This legendary science museum is located within the Presidio and it really offers experiences that cannot be found anywhere else. Some of the biggest highlights include the tactile dome, blowing the biggest soap bubble in the world and dissecting a cow’s eye.

Interesting Fact – Thursday nights are strictly reserved for adults. They let you purchase beer, wine and cocktails and play with the exhibits without feeling guilty about preventing a child from having fun.

The Ghirardelli Square is one of those destinations that would even make Willy Wonka green with envy. Domingo Ghirardelli’s business became the largest chocolate factory in the west in the year 1893 and the business reinvented its factory into a landmark ice-cream parlor and mall once the company moved to the East Coast. The Ghirardelli Square is an exciting spa complex that also features wine tasting rooms. So how about a Merlot massage while you feast on your favorite Ghirardelli sundae?

Interesting Fact – Did you know that close to 40% of the cocoa beans sourced by Ghirardelli ends up getting rejected due to quality control requirements and processes? No wonder each Ghirardelli creation tastes magical!

Lands End is considered to be one of the most beautiful beaches in San Francisco. It boasts of an exciting walkway which stretches over a mile and is also home to a historic restaurant – Cliff House. Lands End is easy enough to get to and if you’re into walking, this is probably the most gorgeous spot in the city for you.

Interesting Fact – Look out for the hidden labyrinth at Eagle’s Point that is a part of the Coastal Trail. This labyrinth was created by a local artist and is known to offer fascinating views of the Golden Gate Bridge.

The Fisherman’s Wharf isn’t a place that is full of restaurants, it is a destination that offers an excitingly unique culinary experience to each and every visitor. Considered to be one of the busiest attractions in Frisco, Fisherman’s Wharf is where you find things like the Musee Mecanique, Ghirardelli Square, Cannery Shopping Center, Pier 39 and Ripley’s Believe it or Not Museum. It is also home to some of the best seafood restaurants in the US such as Fishermen’s Grotto, Forbes Island Restaurant, Joe’s Crab Shack and Alioto’s. Other attractions in the area include a decommissioned WWII submarine and the Hyde Street Pier.

Interesting Fact – The Fisherman’s Wharf is famous as the 8th most-visited destination in the country. Its popularity is such that it manages to attract more than 10 million visitors each year.

Immortalized by the Sean Connery and Nicholas Cage starrer The Rock, the Alcatraz is one of the best things to do in San Francisco. For almost 150 years, mere mentions of the place was enough to send a shiver through your spine. The Alcatraz was the first military prison in the US and was considered to host some of America’s Most Wanted. A tour to the Alcatraz offers insights into the daily lives of those who were once held prisoners here. The prison might be the most obvious highlight, but the island is also known to host beautiful gardens, bird colonies, bays with unparalleled views and tide pools.

Interesting Fact – The Alcatraz was considered to be escape-proof, at least until Frank Morris and the Anglin brothers managed to escape in the year 1962, never to be seen again.

One of the best ways to do justice to the Golden Gate Bridge and its surrounding region is to check out its fascinating views from a 30-minute seaplane tour. These exciting aerial excursions are famous for offering stunning panoramas as well as beautiful views of some of the most popular attractions such as AT&T Park, Angel Island, the Golden Gate Bridge, Alcatraz and Baker Beach.

Important Advice – Do not forget to bring your camera!

The California Academy of Sciences is famous as the only planetarium-rainforest-aquarium-living museum in the world. It offers interesting exhibits piranhas, penguins, wildflowers, a coral reef, a four-story rainforest and a 2.5 acre roof that is full of wildflowers and a thoroughly enjoyable experience.

Interesting Fact – The after-hours tour of the Academy’s exhibits promises an experience unlike any other while in San Francisco. The California Academy of Sciences boasts of an exciting after-hours tour once every week, which includes music, cocktails, appetizers, art displays and after-hours access to the museum.

Whether you’re into fun, architecture, art, or night-life, San Francisco have it all. Start now by book top activities around the world.

Looking for Top 12 best things to do in Cape Town South Africa? Check it out now.