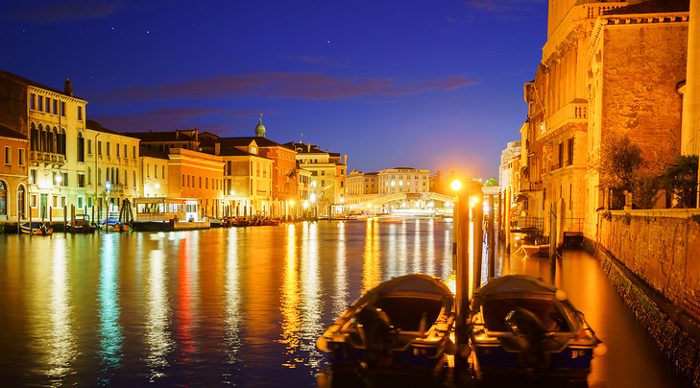 Whoever would have thought that the most beautiful palaces in the world would actually be built on lagoons? Who would believe you if you told them that a city’s main thoroughfare is actually a canal? Venice is just one of those cities that dreams are made of. Venetian architecture and its glorious beauty is famous throughout the world. If you’re planning to take a trip to the most romantic city on the planet, here are just some of the things to do in Venice.

Cicchetti Dishes and Wine Bar with a Local

A Cicchetti Dishes and Wine Bar with a Local tour lets you give your taste buds an exciting tour of some of the best bacari wine bars in Venice and their cicchetti dishes. These Tapas-like dishes prove to be a perfect pairing for Italian wine and this exciting tour lets you sample them like a local. Start off the tour at Campo de la Maddalena, a raised square that is famous for staying unchanged ever since the medieval era and also visit the Cantina Vecia Carbonera, one of the most famous bars in the city. The tour also takes you to Alla Vedova, or “Widow’s Place”, a wine bar that has been in continuous operation since the 18th century. Finally, head over to Campo de Santa Sofia and end your tour in Rialto.

Saint Mark’s Basilica, or Basilica di San Marco, is famous as the signature church in Venice and is truly a sight unlike any other. The church was originally constructed to house St. Mark’s corpse, but it was transformed into a majestic cathedral in the year 1904 after the original constructions burnt down in the year 932. The biggest highlight of the cathedral is the Pala d’Oro, a fantastic gold altarpiece that is studded with more than 2000 rubies, sapphires, emeralds and pearls. The basilica is full of marble patchworks and reliefs from Palestine, Egypt and Syria – trophies of the battles with Genoa and the Crusades. Some of the main highlights of Saint Mark’s Basilica include the Four Tetrarchs, lunette mosaics dating back to the 1270s, mosaics made using 24K gold leaf, the Quadriga of St Mark’s plundered from Constantinople, and a 10th-century rock-crystal ewer with winged feet. The following guided tour to Saint Mark’s Basilica will also allow you to skip the line or queue.

Interesting Facts – St. Mark’s body was smuggled by two Venetian merchants from Egypt by hiding the body in pork fat to avoid detection. Once the Venetian doge had possession of the stolen saint’s body, he set about creating the golden basilica around the body.

Dorsoduro is considered to be the most famous district in Venice and is home to many of its iconic sights. It is located in the southwestern part of the city and is a tourist favorite. Some of the most picturesque canals and palazzis can also be found here. Since Dorsoduro is also famous as a student’s area, it is home to a number of late night drinking bars and boasts of a relaxed and artistic vibe. Some of the main attractions of Dorsoduro include Accademia, San Sebastiano, Peggy Guggenheim Collection (described further below), The Zattere, Santa Maria della Salute and Church of the Carmini.

Rialto Bridge, the most popular walkway in Venice, was created between the years 1588 – 1591 by Antonio da Ponte. The structure is covered by a portico and is flanked by shops on both sides. It is known to offer some of the best views of the city and a walk along the bridge is a must whenever you visit Venice.

Interesting Fact – Make sure that you see the bridge both during day and night. The locals recommend visiting the bridge at dawn and at dusk.

A boat excursion is an ideal way to explore the islands of Torcello, Murano and Burano. These islands are known for their rich history, unparalleled scenery and exquisite handicrafts. Murano, or the Island of Glass, is famous for its glass factories. Burano, also known for its fishing, embroidery and lace making industries, is the perfect place for admiring Mother Nature, sampling amazing homemade cakes and checking out colorfully painted houses. Finally, Torcello is the most ancient inhabited island. A trip to the Byzantine Cathedral, home to the mosaics that represent The Last Judgement, is a must while on the island.

One of the top things to do in Venice is a gondola ride. Enjoy a 30 minute tour of the Grand Canal and experience the romantic beauty that has made Venice one of the must-visit destinations for honeymooners and romantics. The tour also lets you ride through centuries of history and marvel at some of the greatest palaces and constructions. If you really wish to appreciate the true appeal, charm and beauty of Venice, a canal tour is a must. Another option is to enjoy a more elaborate 2-hour gondola tour that starts in the Grand Canal and also take you to the Fenice Theater, Palazzo Contarini del Bovolo and the Rialto Bridge.

The Rialto Markets have held a secret for more than 700 years which restaurants are now catching on to – food tastes best when it is seasonal, fresh and local. Rialto Market is considered to be the first stop for a foodie visiting Venice. It serves numerous Venetian specialties such as moscardini, tiny moeche, seppie and granseole. Apart from the jewels caught in the local waters, the market also features seafood that has been flown in from Asia and Latin America.

Interesting Fact – What makes the Rialto Market so unique is that the food here seems as if it has been grown on another planet. The baby artichokes resemble alien heads, tomatoes look extremely fresh, strawberries have the power to make men cry and red chicory looks like Martian flowers.

After Peggy’s father died onboard the Titanic, she became heiress to one of the greatest collections of the 20th century. Her palatial home, the Palazzo Venier dei Leoni, features her fascinating collection which includes artworks from more than 200 artists such as Picasso, Salvador Dali and Max Ernst. Peggy was an avid art collectors so you will also be able to find paintings made by less famous artists such as Rothko, Kandinsky, Mondrian, Joseph Cornell and Man Ray.

Interesting Fact – Check out the fascinating sculptures created by Anish Kapoor, Giacometti and Moore in the Sculpture Garden.

This day tour lets you escape the city and spend an exciting day in the UNESCO-listed Dolomite Mountains. Visit two of the most fascinating lakes in the area – Lake Misurina and Lake Santa Caterina – with an expert guide before heading up the breathtaking Tre Cime di Lavaredo peak. Soak up the surreal scenery all around you and explore the ski resort town of Cortina d’Ampezzo. While in the area, don’t forget to check out the Pieve di Cadore village, birthplace of the world famous painter Titian.

The Majestic Teatro La Fenice Tour is a must-do while in Venice. Just think about the kind of fascinating operas that the city of Venice has seen over the years. Imagine Sigismondo being acted out and experience the theatricality that has been passed on from generation to generation. Then think of the place that has hosted some of the most popular operas of all time. The first name that comes to mind is always the Teatro La Fenice. La Fenice emerged as the go-to opera within a short period of time and has premiered fascinating operas such as Rossini’s “Semiramide” and Bellini’s “Beatrice di Tenda”. The opera boasts of a seating capacity of 1000 people, unparalleled acoustics, a 66 person opera chorus, and a 98 member orchestra.

Doge’s Palace, or Palazzo Ducale, is a magnificent Gothic palace that was the Doge’s official residence ever since the 9th century and also the seat of the Venetian Government for many centuries. The main highlight of the palace is its elaborate 2nd-floor chambers and the Grand Council Hall which hosts the famous Paradise painting and Doge’s throne. As one enters the palace through the courtyard, the first thing that comes into view are the Apollo and Neptune statues created by Sansovino and the Scal dei Giganti designed by Antonio Rizzo. The 1st floor is home to Doge’s apartments and is known for the St. Christopher painting created by Titian, the 18 roaring lions that decorate the Sala degli Stucci and breathtaking marble fireplaces that were carved by Antonio Lombardo and Tullio. The grand 24K Golden Staircase takes you up to the second floor where attractions such as the Hall of Four Doors, Tiepolo’s Venice Receiving Gifts and Titian’s Doge Antonio Grimani Kneeling Before Faith fight for your attention.

Interesting Facts – Don’t forget to check out the secret passages while in Palazzo Ducale. A secret passage tour is the perfect way of making the palace come alive and hearing stories of Casanova, the only prisoner to have escaped Doge’s Palace.

The Gallerie dell’Accademia is one of the champion destinations for anyone interested in Venetian art from the 14th to the 18th century. It is home to artworks by Grandmasters such as Veronese, Bellini, Titian and Tintoretto and features numerous paintings which reflect the flair, color and drama of Venice. Some of the most famous artworks to watch out for include Giorgione’s La Tempesta, Paolo Veneziano’s Coronation of Mary, Tintoretto’s Creation of the Animals, Jacobello Alberegno’s Apocalypse, and Leonardo da Vinci’s The Vitruvian Man (shown occasionally).

Interesting Facts – Room 1 displays paintings made by some of the first-known Venetian artists such as Paol Veneziano and Lorenzo Veneziano.

The Basilica di Santa Maria della Salute is a 17th century domed church which was commissioned by the plague survivors of Venice to show their gratitude. Its uplifting design is considered to be an engineering feat which simply defies logic. In fact, many believe that the church has some magical curative properties. The basilica also features 12 masterpieces created by Titian, including one of his earliest known works, Saint Mark on the Throne. Another miraculous painting is Tintoretto’s Wedding Feast of Cana. Venetians are still known to light candles for the good health of their families during their annual pilgrimage to the basilica on Festa della Madonna della Salute.

If you are looking for things to do in Italy then click here.