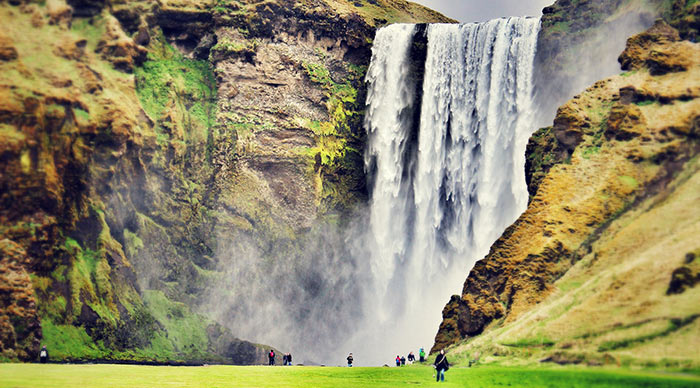 There are places on earth that look like they could be something out of a science-fiction movie. Other places look like landscapes from an alien planet. We have compiled the top 10 hauntingly beautiful landscapes on earth that showcase the diversity and the beauty of different places from across the world.

With a dizzying drop of 60 meters and a width of 25 meters, Skógafoss is one of the top 5 largest waterfalls in Iceland. Skógafoss is especially unique because it comes directly from two glaciers. Millions of gallons of glacial water cascade over the huge cliff every day. Because it is located right off the Ring Road in a small town called Skóga, thousands of people stop by for a quick photo, making Skógafoss one of Iceland’s most visited waterfalls.

Watch in awe of nature’s beauty and wrath – an active volcano that can be foreboding and desolate yet irresistible and beautiful. The view itself is almost out of this world. At 2,329 meters, Mount Bromo is the most iconic mountain in Indonesia despite having the entire top blown off. It sits inside the massive Tengger caldera – a volcanic crater 10 km in diameter, and surrounded by the Laut Pasir – sea of fine volcanic sand.

Grand Prisimatic Spring’s rainbow waters look almost unreal with its multitude of colors. While the center of the pool’s deep blue hue is pretty characteristic, the deep reds, bright yellows and fiery oranges encircling the edges are not. These colors are caused by pigmented thermophilic bacteria that thrive on the rich minerals produced by the geothermal activity. Sitting in the Midway Geyser Basin of Yellowstone, this is the largest hot spring in the United States, approximately 250 by 300 feet in size and around 160-feet deep.

This unbelievable landscape in the Bohol of Philippines looks like it was carefully crafted and manicured by human hands. But this notion is quickly dispelled as it would take an impossible amount of time and manpower. The chocolate hills consist of no less than 1268 hills. They are very uniform in shape and mostly between 30 and 50 meters high. They are covered with grass which turns chocolate brown at the end of the dry season giving the hills their name – the Chocolate Hills.

After gaining international attention following the release of the movie Avatar, Zhangjiajie National Forest Park has seen a tremendous rise in the number of people visiting here. Cloaked in a sea of clouds, this landscape is almost out of this world, which is perhaps why James Cameron chose Zhangjiajie park as an inspiration for Avatar. Visitors get to enjoy a wide selection of scenic areas within the park from the highly popular and often crowded Yuanjiajie (also known as “Avatar Hallelujah Mountain”) to the undeveloped and quiet Laowuchang area.

Join us on a magical tour to the Avatar Mountain’s in Zhangjiajie and experience the fantasy in real life.

Native American lore says of Multnomah Falls as having been created to win the heart of a young princess who needed a secret place to bathe. These incredibly beautiful falls flow all year-round because of underground springs, snow melt, and rainwater that feed them. Although the falls look rugged and remote, the base of the falls is only five-minutes walk from a parking area immediately off of a major highway. Visitors can even get to the top of this 611-foot-tall cascade along a winding trail that runs  approximately 1.2 miles to the top. 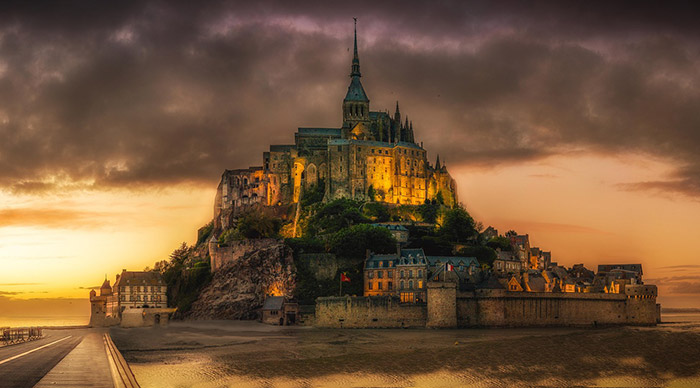 This 1km-diameter clump of rocks jutting out of the waters of the English Channel sees more than two and a half million visitors annually. Looking at some of its eerily beautiful photographs may explain why. Mont Saint-Michel is best known for the medieval Benedictine Abbey and steepled church that occupies most of this mount on the mouth of the Couesnon River. Although the climb to the abbey is hard, it is well worth it, not only for the ornate rooms, staircases, and vaulted halls but also for the splendid views of the bay where the tide comes in at an astounding 1 meter per second.

This stunning golden sea of canola flowers has become a magnet for photographers all over who come to the rolling hills landscape early in spring  to capture the amazing beauty of this incredible land. Great views can be enjoyed from atop the many panoramic mountains in the area like Jinjifeng (Golden Rooster Peak), Shiwan Dashan (Hundred Thousand Hills) or Lingyi Temple hill. The best time to capture the scenery of this picturesque landscape is at dusk or dawn when the shadows of the hills create an appealing contrast against the golden rays of the sun.

The Oeschinen Lake is one of the most beautiful alpine lakes in Switzerland. The brilliant turquoise lake sits at the foot of breathtaking mountains like Blüemlisalp, Oeschinenhorn, Fründenhorn and Doldenhorn. Although accessible by  cable car, the pristine nature and scenic beauty of this 60-meter deep, 1.5 sq. km lake is unmatched. Visitors to the lake can engage in hiking and camping during the summers and skiing and ice-fishing during the winter months.

Dutch tulips are well-known worldwide: perhaps because of the striking colors of the flowering bulbs creating fields of red, pink and yellow, or may be due the economic history of Dutch tulips that created a massive boom and bust in the 17th century. Whatever the case, the beautiful tulips, hyacinths, narcissi, and daffodils that grow in perfectly straight lines in the Dutch countryside is a sight to behold. Visitors can either drive or ride a bicycle to these tulip fields and enjoy the vivid and colorful fields that are scattered all across the north-west part of the Netherlands.

These beautiful photographs and their stories are as unique as the places they represent. If you have the willingness to visit these places then head on over to Bookmundi and book your next dream destination on the world’s most sophisticated travel booking platform.