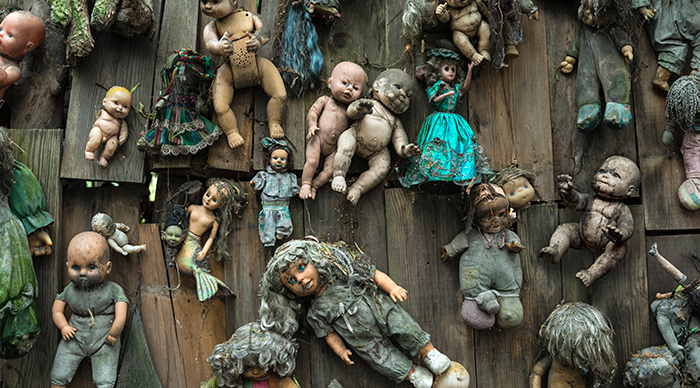 Today we take you on a tour of ghost towns, haunted houses and attractions you wouldn’t call ‘normal’. Thus, if you love horror and and paranormal activities, this is for you!

Our top 10 creepy places to visit around the world is sure to give you hair-raising chills and an eerily unnerving atmosphere all around.

If you’re interested in places that have become famous for their ghoulish reputation, any destination from this list is sure to excite you, leave a tingle down your spine and present an adrenaline rush unlike anything you’ve ever experienced.

Island of Dolls, Mexico (above image)

The Island of Dolls isn’t a place for the faint-hearted. According to legends, a local girl once died in one of the many canals that criss-cross this artificial island. She haunted Julian Barrerra, a man who moved to the island in the 50s, and in order to appease the girl’s spirit, the man bought several dolls and hung them all over the island. According to reports, Julian was heard saying that the girl wanted him to join her as her playmate and his body was found at the very spot where the girl drowned in the year 2001. Visitors to the Island of Dolls often narrate tales of hearing giggles and whispers and having a feeling of being followed by doll eyes.

The Hill of Crosses is a traditional ceremonial site used by Lithuanians to mourn their dead lost to the war. The Soviet Union completely bulldozed this area twice, and the locals rebuilt it to be even bigger than before. Today, the Hill of Crosses has more than 100000 crosses and crucifixes, and has also been described as a place of love, peace and hope by Pope John Paul II. That said, you wouldn’t want to visit this eerie place in the evening, and certainly don’t think about spending the night here!

The Catacombs of Paris is an underground ossuary that contains the remains of more than 6 million people. The ossuary stretches over countless tunnels and caverns and covers an area of more than 280 kms. It was once used by the French Renaissance during World War II, but is mostly visited by tourists searching for the macabre found at the Place Denfert Rochereau. Think of the catacombs as a city of the dead, simply waiting to be explored. Explore the macabre on BookMundi’s Paris Catacombs: Skip-the-line Tour.

Gigantic shapes, animal figures, mythical drawings, you name it. The Nazca Lines of Peru were drawn by the ancient Nazca civilization and they still remain to be one of the greatest unsolved mysteries of modern time. These unexplained shapes reach up to 200 meters in length and each has been executed in single continuous lines. What makes them so weird is that you need to climb a metal viewing tower or board a plane to actually see and recognize these shapes. So what were they doing at a time when man hadn’t even thought about flying? More importantly, who were they drawn for? The gods or the aliens!

Popularly called the Bermuda Triangle of Romania, Hoia Baciu Forest is one place you’d usually want to stay away from. The forest covers an area of 250 hectares and ranks among the most haunted destinations on the planet. It has a penchant for paranormal activities and strange events and some common stories include UFO sightings, ghosts and faces in photographs that weren’t visible to the naked eye. Most visitors report feelings of being constantly watched and anxiety and the strangely shaped trees and unexplained charring to their stumps and branches simply makes the atmosphere worse. People entering the forest also report feeling light-headed and tend to get inexplicable rashes. Moreover, electronic devices are also known to malfunction here. In other words, you’re happier avoiding Hoia Baciu Forest.

There is nothing eerie or scary about Giant’s Causeway, but the place is as strange as it gets. The entire area was created about 60 million years ago when a volcanic eruption spewed out molten basalt which contracted over time. This UNESCO World heritage Site is known for its 37000 geometric columns that are so perfect that they seem to have been created by giants.

Aokigahara has a long connection with demons and evil spirits. Located at the base of Mount Fuji, this strange place is the second most popular spot for suicides. The surrounding forest is eerily quiet due to the wind-blocking density of its trees and there’s an annual body hunt undertaken by volunteers as well. Such is its reputation that hikers are advised to mark their trail with plastic tape to ensure that they don’t get lost.

Rajasthan usually attracts visitors from all over the world with its splendid forts and palaces, but there is one fort that might leave you with the creeps. Bhangarh Fort, an ancient fort located between Jaipur and Alwar, is known to be one of the most cursed places in the country. According to legends, an evil sorcerer cursed the residents of the palace to die unnatural deaths and have their spirits haunt the fort forever. There is hardly any household located close to the fort and just being in its vicinity usually gives you the creeps. And even if you find a household in the immediate periphery of the fort, it is usually without a roof as the locals believe that the roof collapses the moment it is built. People also advise you not to go to the fort after dusk as anyone who has visited Bhangarh Fort has never come back.

Tashirojima is a small island on Japan’s east coast that is inhabited by approximately 100 people. However, what makes this island so popular is that the cats living on the island vastly outnumber the number of people who live here. It is believed that cats were initially encouraged as the island was a major producer of silk and mice tend to be natural predators for silkworms. Over the years, local fishermen began to believe that cats brought them luck and the island also boasts of having a cat shrine as well as cat shaped cabins for tourists to stay in! Not at all scary, but certainly strange!!

Jatinga has all the makings of a normal town for most parts of the year, but visit the place in October, and you cannot help but feel that it has been haunted for centuries. The town witnesses countless bird ‘suicides’ between the months of September to October. These deaths usually occur during the monsoons when birds are attracted to the light of the village on dark, foggy nights and are then killed by the villagers. The locals believe these birds to be spirits flying in the sky and capture them with bamboo poles and beat them to death. It’s ‘suicide’ in the way that the birds keep on coming down to low heights where the villagers keep on catching and killing them with their poles. The phenomenon has drastically reduced in recent years as government officials and local NGOs have been educating villagers about nature and wildlife, but tales and legends of this ghastly practice spread all over the world and has already begun to attract those searching for strange places on the planet.

Feel like we’ve missed out on a strange attraction you particularly like? Let our readers know using the comments below.