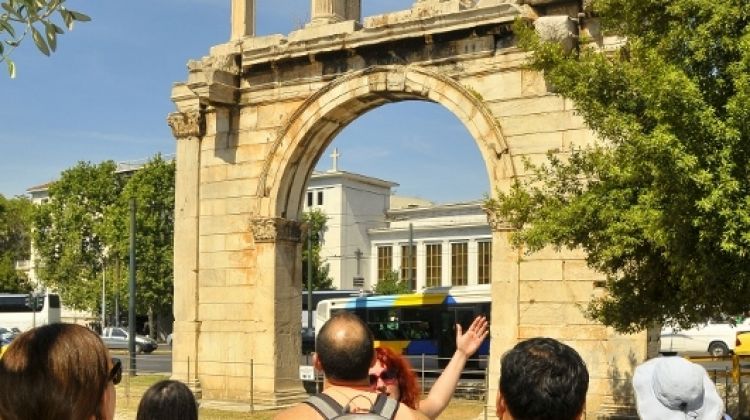 HIGHLIGHTS
See the Heart of Athens
This comprehensive city tour takes you to the modern sights in the heart of Athens and the most important ancient sights that have been standing in the city for millennia. The tour concludes at the Acropolis which is one of the most visited and culturally revered ancient sights in the world. It continues to stand higher than the metropolis built around it, offering panoramic views of the entire capital.

Modern and Ancient Highlights
Start at the Syntagma metro station for a 10-minute tour inside the station’s museum. Archaeological artifacts uncovered during the metro’s construction offer insight into daily life here thousands of years ago. The next stop is the Greek Parliament, followed by the Monument to the Unknown Soldier where you will watch the Changing of the Guards.
The walk continues to the National Gardens of Athens, Zappeion, Temple of Zeus and Hadrian’s Arch. The route passes by the Plaka district to reach the next and final stop: the Acropolis.

The Acropolis
Entering on the south slope of the Acropolis, you’ll visit the Dionysus Sanctuary and Dionysus Theater before you walk up the slope leading to the Acropolis monuments. Panoramic views of the city will be perfect for Instagram-ready photos.
During your tour, you’ll gain insight into the significance of the historic monuments of Acropolis including the Parthenon, the Erechtheion, the Propylaia, the Nike Temple as well as other significant sights of Athens including the Odeon of Herodes Atticus, the Ancient Agora, the National Observatory of Athens and the city’s scenic hills: Filoppapos, Mars, and Pnyx.

The tour ends at the Acropolis.

--Up to 72 hours prior to the scheduled tour: The customer shall not incur a penalty charge, apart from the charge due to AWT for the use of a credit card.

--Between 72 and 24 hours prior to the scheduled tour: The customer shall incur 50% of the amount payable --for the tour as a penalty charge, plus any other expenses, i.e. credit card charges or cancellation charges for means of transportation that may have been reserved for the tour.

--Less than 24 hours prior to the scheduled tour or if customers do not show up at the agreed meeting point: 100% of the amount payable shall be withheld as compensation for the cancellation of participation in the program.

Other Practical InformationMEETING POINT Your Athens Walking Tours guide holding the orange colored Athens Walking Tours sign will be waiting for you INSIDE the Syntagma Metro Station one level down, by the ticket validating machines, underneath the big central hanging clock. Please be at the meeting point by 09:15 because the tours starts at 09:30 am. ENTRANCE FEES (TICKETS) ARE NOT INCLUDED Please make sure you have cash (euros) with you to purchase the tickets. We buy the tickets for you in advance in order to avoid lining up.Cost of the entrance tickets: 28 € per adult. Discounts may apply depending on age and nationality for youths under 25 years old or seniors over 65 years old. Please hold a valid passport for age and nationality verification at the sites.
NEED HELP OR HAVE A QUESTION ABOUT THIS TOUR?
If you have any question about this tour or need help with planning a trip, please do not hesitate to get in touch with us. We're ready to help.
Get help
hours 3.30 From US$ 51
CHECK AVAILABILITY
Response Time: 1 hour Response Rate: 100% MAKE AN ENQUIRY