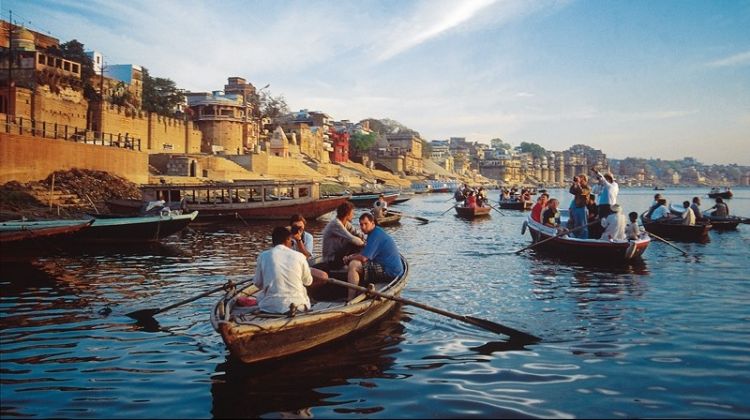 HIGHLIGHTS
Start your day with a morning boat ride at dawn. You have a chance to observe the Hindu way of life along the bank of the Ganges River (Ganga Ghat or Banaras Ghat).

Varanasi presents a unique combination of physical, metaphysical and supernatural elements. According to Hindu mythology, Varanasi liberates soul from human body to the ''ultimate''. It is the Ganga Ghats of Varanasi that complement the concept of divinity. The Ganga Ghats at Varanasi are full of pilgrims who flock to the sacred river to take a dip in the holy Ganges, which is believed to absolve one from all sins.

Watching people come down to the river early in the morning, taking a bath in the mother Ganga, performing rituals, worshiping the Sun are all part of a unique experience.

There are number of temples on the banks of the Ganges River in Varanasi. The old buildings, ashrams and palaces along the riverside look as colorful as a rainbow when the sunlight hits them. It is at the Banaras Ghat where we can see life and death together.

There are numbers of Ghats alongside Ganges River in Varanasi. Some of the prominent and popular Ghats at Varanasi are the Dasaswamedh Ghat, Manikarnika Ghat, Harischandra Ghat, Assi Ghat, Shivala Ghat, Man Mandir Ghat, Darbhanga Ghat, Ahilyabai Ghat and Kedar Ghat.

After the boat ride, we go on a short walk in to the oldest part of Varanasi which is now famous for its narrow streets. Stop by the Kashi Vishwnath Temple, also known as Golden Temple, and see the outside of this incredibly beautiful temple.

After the tour is concluded, we will take you back to your hotel.
View More
CUSTOMER REVIEWS
5 - Excellent
Based on 1 review
Excellent
5 - Excellent
“Excellent”
WHAT'S INCLUDED WHAT'S EXCLUDED
Why Book with Bookmundi
What are customers saying about Bookmundi
Excellent
4.71 Average 318 Reviews

NEED HELP OR HAVE A QUESTION ABOUT THIS TOUR?
If you have any question about this tour or need help with planning a trip, please do not hesitate to get in touch with us. We're ready to help.
Get help
hours 03 From US$ 55 See Group Discount
CHECK AVAILABILITY
Response Time: 1 hour Response Rate: 100% MAKE AN ENQUIRY