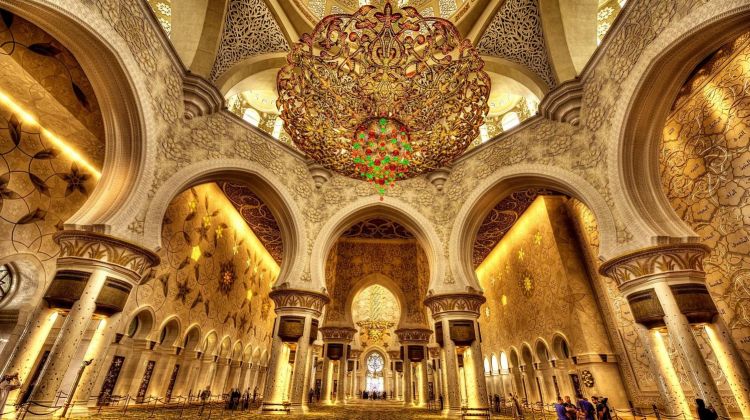 HIGHLIGHTS
Depart for Abu Dhabi, the capital and the largest emirate of UAE. This guided tour will give you extensive info about Abu Dhabi and the island on which it stands.

The first stop of this tour is the iconic Sheikh Zayed Mosque, one of the largest mosques in the world that can host a whopping 40,000 worshippers. Known for its gilded wonders, mesmerizing architecture and stunning reflective pools, this is a place of mesmerizing beauty. The mosque is built as a monument to consolidate Islamic culture and a prominent center of Islamic sciences.

The tour then heads towards “Abu Dhabi Downtown” and the visit of Heritage Village, which houses a small museum showcasing customary daily activities of the Arabs before the discovery of oil. We shall also drive through the impressive Abu Dhabi cornice area to catch a glimpse of the mesmerizing skyline of Abu Dhabi.

A photo-stop at the “Emirates Palace”, an iconic Abu Dhabi hotel is also included in the tour.

We will then move towards the Saadiyat Island (a man made island) where the Louvre Museum and the Guggeheim Museum are close to completion. The tour will continue to the Yas Island, the top entertainment destination in the emirate.

Yas Island is home to the state-of-the-art FORMULA 1 Yas Marina Circuit. It also houses the world’s biggest indoor theme park, “Ferrari World”. After having a short stop at Yas Island the tour will head towards Dubai.
View More
CUSTOMER REVIEWS
5 - Excellent
Based on 1 review
T
5 - Excellent
Happy full day with Yasur!
“Although we were delayed to the start of our tour by 1.5 hrs, the day turned out to be a very good one, thanks to our guide, Yasur! We thoroughly enjoyed his commentary throughout the day! His charm and enjoyable personality made for for a very memorable day! The attractions were enjoyed by all of us with the wealth of historical background related to us by Yasur!
Thank you for a very nice way to leave us all with very pleasant memories of your great country!
Ted and group of ten from Canada!”
WHAT'S INCLUDED WHAT'S EXCLUDED
Why Book with Bookmundi
What are customers saying about Bookmundi
Average Reviews

NEED HELP OR HAVE A QUESTION ABOUT THIS TOUR?
If you have any question about this tour or need help with planning a trip, please do not hesitate to get in touch with us. We're ready to help.
Get help
hours 09 From US$ 80
CHECK AVAILABILITY
Response Time: 3 hours Response Rate: 100% MAKE AN ENQUIRY