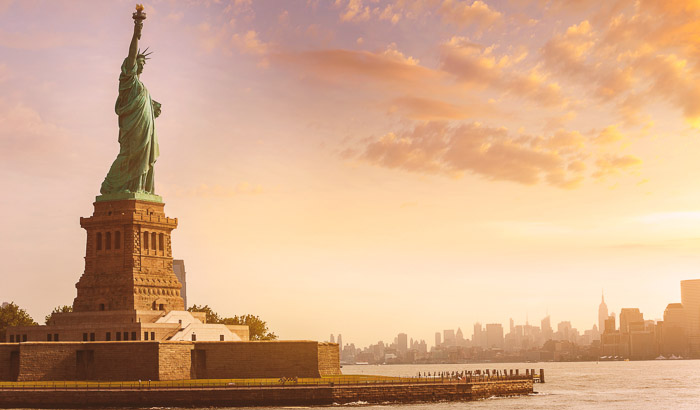 ‘The city that never sleeps’, ‘The Big Apple’, ‘The Center of the Universe’… whatever you call it, New York remains one of the hottest tourist destinations in the world. With an exhaustive list of activities and attractions, there is something for absolutely everyone to enjoy, so get planning and discover the magic of NYC. Below we have compiled the top 12 best activities in New York:

One of the world’s most recognisable landmarks, the Statue of Liberty is the top must-see attraction when visiting New York City. The statue is located a short ferry ride from the city on Ellis Island (home of the Ellis Island Immigration Museum), and the cruise alone offers great views of the city and its surroundings. To climb up the statue, ticket prices vary depending on how high you want to go – view the whole city from Lady Liberty’s crown!

The Empire State Building is another one of New York’s world-famous attractions. You can find the skyscraper in the heart of the city, and ride to the 86th floor to look out over New York. There are plenty of picture opportunities and souvenirs to buy, and as the Empire State Building was the tallest building in the world until 1970, it’s a New York attraction that can’t be missed.

New York’s library is close to Times Square and Grand Central station; it is the largest in the United States and fourth largest in the world. It was built in 1911, and visitors can marvel at the stunning architecture that remains today. Scheduled tours take place daily, giving guests the option to see the famous Rose Reading Room and its ornate painted ceiling.

Times Square is probably one of the most recognisable New York City images. With its electronic billboards and advertisements, theatres, street performers and family-friendly shops like Disney, M&Ms and Toys ‘R’ Us, Times Square embodies the lively, bustling spirit of the city. You can even catch a recording of ABC’s Good Morning America, visit MTV’s headquarters or watch the famous ball drop on New Year’s Eve.

This sprawling architectural landmark covers most of midtown Manhattan; Central Park has become an oasis of peace and beauty in the heart of the city. Visitors to the park can walk to the centre and race boats on the water, take a horse and carriage tour, ride on gondolas or even just lay down on the grass and relax. Central Park Zoo is state-of-the-art and world famous, so definitely an attraction to see if you have kids.

The Museum of Modern Art, or MoMA, as it’s often called, is a famous art museum located in midtown Manhattan. You’ll see the most unusual and forward-thinking exhibitions in the world, and experience the thrilling work of leading painters, sculptors and performance artists. The museum is open every day except for Thanksgiving and Christmas, and the admission price includes access to all special exhibitions and galleries.

Located on the southwestern tip of the island in the neighbourhood of Brooklyn, Coney Island is an amusement park and leisure destination that is open between Easter and Halloween. Coney Island is the birth place of the hot dog, and features classic fairground rides and roller-coasters for all the family to enjoy. There are fireworks every night during the summer, and Coney Island can be reached on the train easily from midtown.

The Rockefeller Center is New York’s top tourist attraction, and for good reason – there’s something to do here any time of the year. At Christmas, its home to the city’s enormous Christmas tree, and one of the world’s most famous outdoor ice rinks. You can view the city from the Top of the Rock Observation deck and visit Radio City Music Hall – an art deco landmark that hosts classic seasonal shows, and is home to the Radio City Rockette dancers.

The Bronx is a well-known borough of New York City, and is also home to the largest metropolitan zoo in the United States. See every animal from big grizzly bears to lions and tigers, sea lions and rare reptiles. There’s also camel rides, a monorail, animal feeding and a 4-D movie theatre. Bronx Zoo is a perfect attraction if you’re visiting New York with kids or animal lovers of any age.

The New York Yankees baseball team is famous all over the world, and you can visit the home of the team when you’re in New York. As well as getting tickets to a game, there are stadium tours and an opportunity to see and hold important artifacts in baseball history, such as Babe Ruth’s bat and the World Series trophy. The onsite shop is stocked full of souvenirs bearing the instantly recognisable Yankees logo, and is the best stop to buy authentic team jerseys and balls.

The number of people visiting New York’s theater district climbs every year, and it’s not hard to see why – Broadway musicals shaped American popular culture in a big way, and continue to make thousands of people happy every day. Broadway is home to classics such as The Lion King, Wicked and The Phantom of the Opera; if you’re visiting New York City, seeing a Broadway show is the perfect way to experience the true dramatic nature of the city.

Grand Central is not just New York’s biggest commuter rail station and the busiest in the country, it’s an internationally-recognised landmark and architectural triumph. The 19th Century terminal boasts lofty ceilings, marble and brass furnishings, spiral staircases and, of course, the Grand Central clock (its four faces are rumored to be made of opal and worth up to $20 million). For those who are just visiting, there are also a number of shopping and dining options in the terminal.

Now that you’ve identified the top 12 best activities in New York – it’s time to  Make sure that your seats are reserved – Book with Bookmundi.