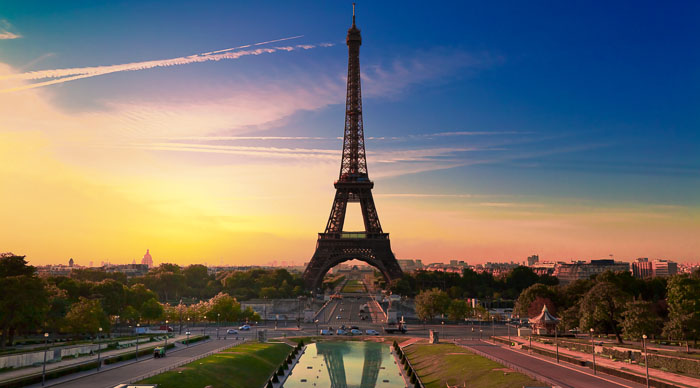 An international hub for culture and the arts, those lucky enough to visit the French capital can expect to experience the very cutting edge of fashion, music, theatre, and visual art.

And, with more than its fair share of world-famous sites and attractions, a reputation for fine-dining, and a vibrant nightlife, your only problem may be finding time to fit everything in.

To make sure you don’t miss out, we’ve put together a list of the top 10 best things to do in Paris.

Perhaps Paris’ most famous attraction, and undoubtedly one of the most well-known structures in the world, the Eiffel Tower is an iron lattice construction that stands at an impressive 986 ft., making it the highest edifice in the city.

Located in 7th arrondissement, an area packed with tourist attractions – including the Musee Rodin, the Hôtel des Invalides (Napoléon‘s resting place), and the French National Assembly – the Eiffel Tower has been ascended by more than 250 million people to date, and even is even home to a Michelin star restaurant.

Notre-Dame de Paris, or Notre Dame Cathedral, is a historic Catholic cathedral widely considered to be one of the finest examples of French Gothic architecture.The cathedral, which remains in use, also houses some of Catholicism’s most important first-class relics, including the Crown of Thorns, a fragment of the True Cross, and one of the Holy Nails.

If you go, make sure you hear the famous bells, many of which were replaced in 2013 with pitch perfect replicas. Enjoy Paris at its best with awe-inspiring, ethereal and peaceful cathedral of Notre Dame.

The Louvre, one of the biggest and most famous museums in the world, is both a historic monument in its own right and home to more than more than 380,000 historically and culturally significant objects.

Be sure to see the Nike of Samothrace, the Pyramide du Louvre, and, of course, the Mona Lisa.

The birthplace of the modern can-can dance, and perhaps the single most important factor behind the introduction of cabaret to Europe, Moulin Rouge (French for Red Mill) is perhaps one of the biggest reasons that Paris has a reputation as the most romantic city in the world.

Modern-day visitors are able to watch dance performances from around the globe, as well as the more traditional cabaret performances that the venue is famous for, over great food and plenty of drinks. This venue will never go out of style, so book early to avoid disappointment.

Activity 5) The Palace of Versailles

The Palace of Versailles is one of the largest and most opulent castles in the world. And with 250 acres of landscaped gardens, a Hall of Mirrors containing 357 mirrors in total, the magnificent Chapel of Versailles, and Grand Apartment, there’s an awful lot to see.

The site was originally Louis XIII’s hunting lodge before his son expanded it. This transformation was so extensive that the entire court and government of France were relocated to the site in 1682.

One of the most significant achievements of 18th century French architecture, the Palace of Versailles is a definite must-see for those interested in French history.

The most visited theme park in Europe, Disneyland Paris is located just east of the centre of Paris.

Covering an area of 4,800 acres, and with two theme parks, numerous hotels, a shopping complex, a golf course, and much more besides, Disneyland Paris really has got something for everybody.

Paris has a macabre secret: beneath the city lies an extensive, complicated system of underground ossuaries.

The ossuaries are thought to be the final resting place of around six million people, and their skeletal remains are often placed in truly eerie decorative arrangements.

Though only a small section of the tunnels is open to the public (around two kilometres), the entire system has been dubbed “The World’s Largest Grave”, and covers around 11,000 sq. m in total.

Like any major city, with so much going on, Paris can become a little overwhelming. Luckily, the city has a plenty of places where you can go to gather your thoughts and plan your next move.

The serene Palais-Royal gardens are a peaceful 20,000 sq. m. haven right in the heart of the city.

Designed and planted in 1633 by Pierre Desgotz, the gardens are as beautiful as they are vast, and are home to el les boutiques du Palais-Royal (some of the finest fashion shops in Paris).

Standing proudly at the meeting place of twelve radiating avenues, the Arc de Triomphe honours those who fought and died for France in the French Revolution and the Napoleonic Wars, and has the names of French victories and generals inscribed on its inner and outer surfaces.

Construction of the Arc de Triomphe was ordered by Napoleon in 1806, though it was only completed 30 years later, long after Napoleon’s death in 1821. Today the structure is one of Paris’ most famous attractions, and a symbol of France’s often troubled history.

One of Paris’ first garden cemeteries, and the largest cemetery in the city, Père Lachaise, which covers more than 44 hectares, was established in 1804.

Originally unpopular due to its location, it was only after Jean de la Fontaine’s and Molières’ remains were moved to the site as a publicity stunt that the cemetery became the popular burial location it is today.

Of course, there are plenty of other great things to do in Paris, and it’s always worth keeping an eye out for seasonal and temporary events, as well as music, theatre, and exhibition listings.

But whatever else you do, see these 10, and you will have well and truly “done” Paris.

Prepare for the trip and start now by Book your favourite activities in Paris.

Not in the mood for Paris? Explore the Top 12 best things to do in San Francisco instead.