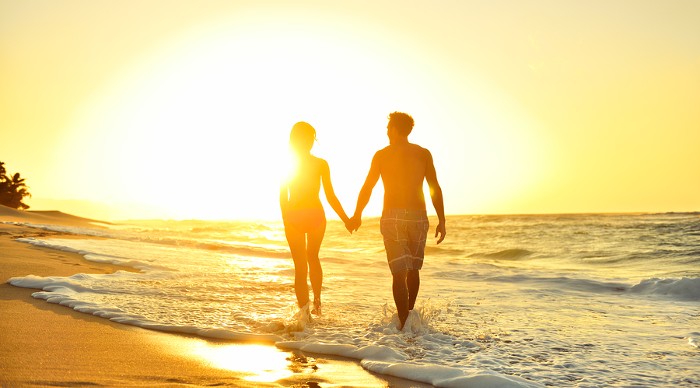 Thinking about where to take your loved one this year? There’s a good chance that the first thing that comes to your mind is a romantic beach in an incredibly romantic destination. The world is full of exotic romantic beaches that offer paradise-like settings and are perfect for those searching for a destination to rekindle their romance, so you can always find something in all corners of the planet. Whether it’s a honeymoon or a romantic getaway, these romantic beaches offer an exciting adventure and get you in the mood to love.

Australia doesn’t have any shortage of breathtaking locales and romantic beaches, but the stunning Whitehaven Beach beats them hands down. The beach is located in Whitsunday Island, one of the many islands that lie among the Great Barrier Beach. It is famous for its pristine sands and enchanting locales, and if you’re keen to explore the surrounding underwater beauty, you don’t need to go far as the rich marine life is easily accessible to snorkelers. For the best views, visit the Tongue Point on Whitsunday Island. Visiting the point during low tide introduces you to an enchanting fusion of colors that cannot be seen anywhere else in the world.

Boracay was once known to be very popular with backpackers and only offered basic accommodations. Over the years, it emerged as one of the most romantic beaches and beautiful destinations on the planet and left rival destinations such as Koh Samui far behind. The White Beach is perhaps the best beach in this 5-mile island, whose silky soft sands may just be the softest sands on the planet. We recommend you to stay at the Mandala Spa & Villas located on the southern end of White Beach.

The Waipio Valley Beach is located in Waipio Valley, and is one of the hardest beaches to get to. You need to drive down an extremely narrow and steep road, but the difficult drive is entirely worth it. At the end of your drive, you’re offered views of black volcanic sand that stretch over a mile and are bordered by lush green rainforests and 2000-foot cliff walls. If things don’t sound magical already, the beach also offers views of the Waiulili and Kaluahine waterfalls which cut into the cliffs towards the southern end and are accessible from the beach.

The Anse Source d’Argent is famous as one of the most photographed beaches in the world. It boasts of pink sands and towering cliffs and is known to be amazingly spectacular. To add to its aura of mystery, La Digue’s Veuve Nature Reserve is also home to the black paradise flycatcher bird, one of the rarest species on the planet.

Mexico is home to some of the most spectacular beaches around the world. It manages to hold out on its own against traditional heavyweights such as the Caribbean and French Polynesia, and many of its romantic beaches always rank among the best. That being said, none of the beaches can even come close to the El Castillo Beach. The beach is flanked by endless expanses of green on both sides and its silvery sands invite you to clear views of the shallow Caribbean Sea. The coup de grace – those towering 40-foot limestone cliffs which offer the best backdrops for your Instagram photos.

We just said that the El Castillo cannot be beat. While that may be true, the Hidden Beach is something entirely different. As the name suggests, the beach is actually hidden!! It is an underground beach that is rumored to have been formed due to bomb testing in the 1900s. You need to pass through a water tunnel to get to the beach, and the only thing to do here is to gawk at the beach and the surrounding scenery. It really doesn’t look like it’s a part of planet Earth.

Lopes Mendes is home to a two-mile stretch of deserted powdery white sands that introduce you to some of the most crystalline and clearest waters. The beach is extremely desolate, and you won’t come across things like restaurants or beach shacks here. What takes their place are almond trees and palmsthat offer some much needed shade for you to nap in the laps of your lover. It takes three hours to get to the beach from Rio, but again, it is well worth the effort.

The Paradise Beach in Mykonos is famous for having the best sands in the Aegean region. And as you might already be aware, Mykonos is also popular as one of the wildest party spots on the planet. Combine  the  two,  and  you  are  in  store  for  one  of  the  sexiest beach  experiences  of  your  life.  We recommend to time your visit with the full moon party held each month. This crazy party is one of the wildest full moon parties in the world, and the Tropicana Beach Bar located on the beach has been rated among the top beach bars in the world as well.

Palawan has managed to stay away from tourist spotlight and people who have been there would hope that  it  stays  that  way.  Palawan  is  perhaps  one  of  those  few  destinations  that  you  wouldn’t  be comfortable  sharing  on  the  social  media,  as  the  secret  then  gets  out.  The  place  is  home  to approximately 50 different white sand beaches, and choosing one above the other is simply impossible. The beaches boast of some of the whitest and finest sands in the world, and are surrounded by dramaticlimestone formations. The water itself is so beautifully blue that it puts the Caribbean Sea to shame. And the sunsets!! Ooh, those sunsets!!! They might just end up ruining everything for you’d never want to leave this magical destination.

The Rabbit Beach is a secluded nature reserve that can only be accessed by a boat. Ironically, there are no rabbits in Rabbit Beach, but there are those lovelies known as dolphins frolicking in the water. The beach also lies close to the isle of Linosa, which is famous for its red and black beach.
We hope that you liked our Love is in the Air Theme, and would be delighted to hear from you. Think weshould go ahead with such themes in the coming weeks? Give us a shout out using the comments below.
259 Shares
Share251
Tweet
Pin8
Share