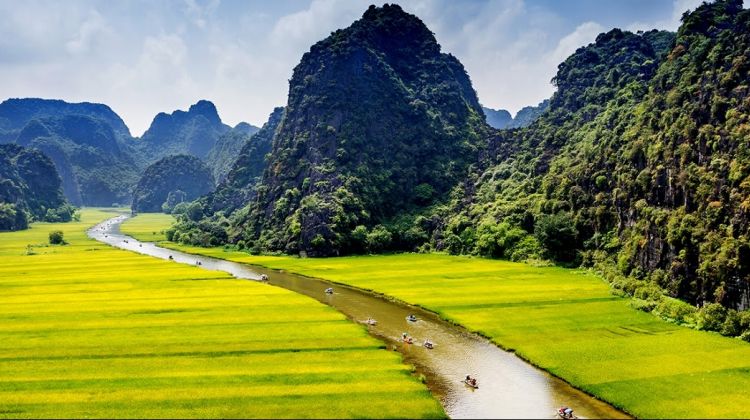 HIGHLIGHTS
The capital of Vietnam (or part of it) back in the 10th & 11th centuries in Ninh Binh province, there are really only a few temples or small buildings like those left in this place about an hour and a half's drive south of Hanoi. Didn't see any statue of Buddha in the few temples there, just those of some ancient Vietnamese or Chinese deities and such. But it's really the sceneries along the way to this place and those around this place that you would go to this place for, you start to see these stand-alone mountains as you get to the vicinity of this place instead of mountains as you normally see them elsewhere (connected to one another as part of a mountain range). Tam Coc, called the "inland HaLong Bay is very beautiful. This is a 1.5 - 2 hour row boat tour on the river and through caves. Bring proper attire - it can downpour and it can be extremely hot. Bring water too.

A journey to a beauty landscape and rich culture

- 8:00 a.m: Leave the hotel at Hanoi.
- 10:30 a.m arrive at Hoa Lu Ancient Capital. In 968, Dinh Bo Linh declared himself as the King. Since then Hoa Lu existed as the capital for the next 41 years (968 – 1009), of which 12 years was under the Dinh dynasty – King Dinh Tien Hoang, the country named Dai Co Viet, and 29 years later was under the Le dynasty – King Le Dai Hanh. In 1010, King Ly Thai To moved the capital from Hoa Lu to Thang Long – present day Hanoi. Hoa Lu became the old citadel. In Hoa Lu there are now 2 temples have been built on the ground of the old royal palace, one is dedicated to King Dinh Tien Hoang, the other is to King Le Dai Hanh. The visit offers a chance to know more about part of feudal dynasties and historical periods in Vietnamese history.

- 12.00 a.m: Arrive Tam Coc and have lunch in a local restaurant with goat meat which is famous as the local specialty.

- 1.00 p.m: 5 minute-walk to the boat station and start the 2hour-boat trip to visit Tam Coc. Known as “Halong Bay on land”, Tam Coc are three limestone caves stretching along Ngo Dong River. The boat trip is a nice journey along the river with peaceful scenery of Limestone Mountains, rice paddy and the site of some temples along the way from Hang Ca (first cave) to Hang Hai (second cave) and Hang Ba (third cave).