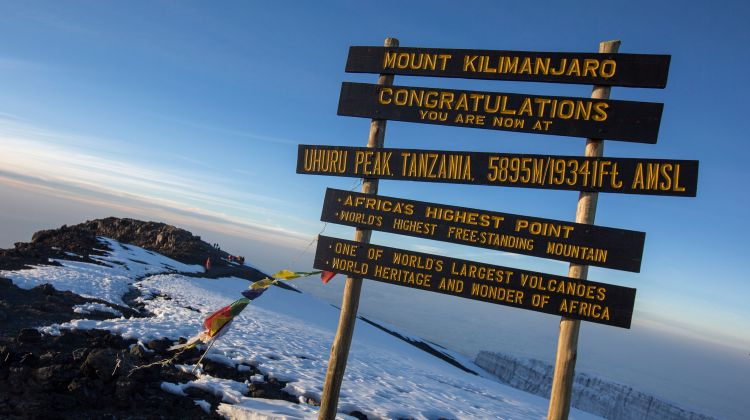 HIGHLIGHTS
The Northern Circuit route is our newest offering on Mount Kilimanjaro. This special 9 day climb offers excellent views from all sides of the mountain, including the quiet, rarely visited northern slopes.

The route approaches Mount Kilimanjaro from the west, beginning with a long drive from Moshi to Londorossi Gate. From there, the first two days are spent trekking through the rainforest to Shira Ridge, before crossing the Shira Plateau. Afterwards, the route heads north and circles clockwise from Moir Hut to Buffalo Camp to School Hut, before summiting from the east. Descent is made via the Mweka route.

The Northern Circuit route is certainly one of the best routes on Kilimanjaro. While you trek, you will see nearly 360 degrees of beautiful scenery as you traverse the mountain at 13,000 feet.

The Northern Circuit is offered as a nine day group climb or private climb.
View More
CUSTOMER REVIEWS
5 - Excellent
Based on 3 reviews
A
5 - Excellent
Kili Northern Circuit
“Very enjoyable trip, well organised, friendly staff and beautiful place. Made it to the top of Kilimanjaro for sunrise thanks to help of excellent guides. Food on trip was plentiful and tasty, porters worked very hard and were fast too. Thanks to all.”
G
5 - Excellent
Once in a lifetime experience hiking through Kilimanjaro's Northern Circuit
“Enosa Expeditions did an amazing job organizing a 9-day tour of Kilimanjaro and a 3-day safari tour. We definitely enjoyed ourselves. The guides, cooks, and porters for both the safari and the trek were knowledgeable, professional, and friendly. Noel, the coordinator, was very responsive and attentive to all our needs. Everyone in our 5 person group was able to summit Kilimanjaro without any problems, and none of us got altitude sickness. The accommodations at Kilimanjaro Wonders Hotel, our place of stay, were also excellent. I will definitely recommend Enosa to anyone who wants to ascend Kilimanjaro or have a fun time in Tanzania.”
J
5 - Excellent
Absolutely Wonderful!!
“Enosa Expeditions is absolutely the best company with which to summit Kilimanjaro. My wife and I just went in July. We contacted several companies before choosing Enosa to plan our trip, and we were glad we did. Noel (A manager) was very, very helpful to communicate with by e-mail and phone. He listened closely to what we wanted, helped us make decisions based on his close knowledge of Tanzania, and responded patiently and promptly to my endless lists of questions...even helped me learn a few words of Swahili.
The hiking was beautiful, challenging but not overwhelming. Everyone in our group was able to summit because of the guiding, leadership and support of all the team. The guides, assistant guides, chef, and porters are excellent. Very professional and helpful. We choose Enosa because of its reputation for safety and success.
The only way to see the real Tanzania is with Enosa Expeditions. Their first priority is that you have the trip of your lifetime. They have a wonderful staff of friendly and helpful locals. The food is amazing. The guides are simply the best of the best. Regan and John are extremely knowledgeable, helpful and friendly for Mount Kilimanjaro.
We think the company offers some unique insights/experiences into the country because it is owned by Tanzanians.
Although I don't know when my schedule will permit it, I am already looking forward to my next trip with Enosa.”
ITINERARY
Alt. in: ALTITUDE MAP
Expand All
WHAT'S INCLUDED WHAT'S EXCLUDED
Why Book with Bookmundi
What are customers saying about Bookmundi
Excellent
4.68 Average 348 Reviews

NEED HELP OR HAVE A QUESTION ABOUT THIS TOUR?
If you have any question about this tour or need help with planning a trip, please do not hesitate to get in touch with us. We're ready to help.
Get help
days 11 From US$ 2,200 See Group Discount
CHECK AVAILABILITY
Response Time: 2 hours Response Rate: 100% MAKE AN ENQUIRY