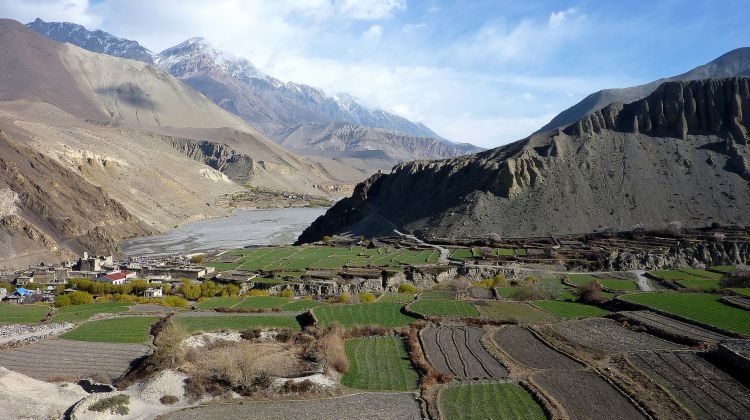 HIGHLIGHTS
The Upper Mustang trek provides travellers with the opportunity to venture into the remote, semi-independent Kingdom of Upper Mustang, located north of Annapurna on the Tibetan border at an altitude of roughly 4000 meters. Make your way up the Kali Gandaki river’s banks, witnessing the unbelievable beauty of blue waters and desert surroundings to this ancient kingdom – a place where culture meets nature and forms an eternal bond.

This mystical region is geologically and culturally a part of the Tibetan plateau. Its valleys are arid and dry with colourful rock formations and cliffs. Behind the cliffs stand the Himalayan peaks, awe-strikingly beautiful and snow-topped. Part of Mustang’s beauty lies in the fact that this restricted region is visited only by a limited number of tourists, which leaves it one of the few places on the planet where one can see undisturbed Tibetan culture.

Mustang is well known not only for its unique, breathtaking landscapes but also for its unique cuisine and production of a tasty apple liqueur. For the brave trekkers and the ones keen on experimenting, the tasting of the local butter tea is an unforgettable experience and a chance to near oneself to the lifestyle of the local population.
View More
CUSTOMER REVIEWS
5 - Excellent
Based on 4 reviews
Unforgetable trip
5 - Excellent
“Highly recommended the Himalayan trekking & Tour Company.we had a great experience on the trek with our excellent guide Babo and porters Raj, Chandra and Tangka. Thay helped us a lot along the journey. They kept encouraging me, without them and my tour partners, i am sure i couldn't accomplished the whole journey nicely.”
Great Guides - A shame that the Mustang Valley is under construction
4 - Very Good
“THE TOUR: We had chosen to shorten our total amount of days in the Mustang Valley, so we had a bit of a time pressure to both trek in and out of the valley in 9 days. Our great guides proved very helpful in doing this. The tour was a mix of homestays and we were very positively surprised by the level of service and offerings. The culture in the valley is intact and flourishing. The old ways are very much alive in here!

THE ONLY DOWNSIDE on the tour is that a road is being build cutting through the valley and up to Tibet. This road construction can at times be a nuisance and obstruct the beautiful views that otherwise exists on the path. I hope for the people of Mustang and trekkers that the old trekking roads that has given way for the new double lane road will be reconstructed higher up the mountain-slopes as that will increase the experience.

I can truly recommend this tour.”
Upper Mustang Trek July 2019
5 - Excellent
“My partner and I organised the Upper Mustang trek through Himalayan Trekking. Communication was excellent with Surya and customising the itinerary was made very easy.
We had a fantastic experience on the trek with our excellent guide Tersang making sure we were all looked after the whole time. He was very knowledgeable about the region, telling us the history of the places we visited and he knew the best places to stay and visit. We went at a pace that suited us and when my partner injured herself he organised a Jeep at short notice.
Tersang is very friendly and personable and made the tough days easier.
We would highly recommend Tersang and this company.”
Fantastic Upper Mustang Trek
5 - Excellent
“It was me and my friend first time in Nepal. We did upper Mustang trekking with Asian Journeys. The price was reasonable. Our Guide and porter were really great. They are knowledgeable, friendly and helpful. Everything was organized very well and booked correctly by Mr Surya owner of this company. It was a great experience and we like to highly recommend Asian Journeys Team to everyone who is planning to do a trek in Nepal.”
ITINERARY
Alt. in: ALTITUDE MAP
Expand All
WHAT'S INCLUDED OPTIONAL ADDONS (Available during check-out) WHAT'S EXCLUDED
Why Book with Bookmundi
What are customers saying about Bookmundi
Excellent
4.71 Average 318 Reviews

QUESTIONS AND ANSWERS Find answers to the most frequently asked questions about this tour.
Read more questions and answers
NEED HELP OR HAVE A QUESTION ABOUT THIS TOUR?
If you have any question about this tour or need help with planning a trip, please do not hesitate to get in touch with us. We're ready to help.
Get help
days 15 From US$ 1,240 See Group Discount
CHECK AVAILABILITY
Response Time: 1 hour Response Rate: 100% MAKE AN ENQUIRY