The Öræfajökull volcano on Iceland's south-east coast is a name you might have heard quite frequently in the media this last little while. That is because scientists predict that this volatile peak might erupt at any moment!

Öræfajökull is one of Iceland’s many ice-capped volcanoes. As Iceland’s largest active volcano and Europe’s second largest volcano (second only to Mt Etna in Sicily), Öræfajökull is constantly kept under close surveillance. There are at least two known records of the Öræfajökull volcano erupting: an explosive eruption in 1362, which totally destroyed the nearby district formerly known as Litla-Hérað, followed by a smaller eruption in the late 1720s. In 2017, increased earthquake activity was noticed. Most recently, an ice-cauldron (also called a caldera) appears to have formed in Öræfajökull volcano’s main crater, and the smell of sulphur can be detected in the air nearby.

While a potential eruption cannot easily be predicted (and may sound a bit frightening), there is no need to fear. Volcanoes often show increasing geothermal activity for years prior to an eruption. At the time of writing this article, a yellow warning has been issued for the volcano —more of a safety precaution than anything else as scientists are unsure of the Öræfajökull volcano’s eruption habits. All the same, tourists continue to flock to the area, particularly in the summer months.

This fascinating volcano is incredibly impressive and well worth a visit during your trip to Iceland — particularly if you’re a bit of a geology geek! If a visit to Öræfajökull is on your bucket list, here is everything you need to know to make it totally worthwhile.

Öræfajökull volcano is located on Iceland’s south coast, one of the country’s most popular areas for tourism as it is full of black sand beaches, glaciers, and other natural wonders. To get to Öræfajökull from Reykjavik (as with the majority of Iceland’s popular sites), you must follow the Ring Road (Road 1). Leaving Reykjavik, head south-east along the route. You will pass many popular sights that are well worth a visit along the way, including Selfoss (with a slight detour to Seljalandsfoss), Skogafoss (another of Iceland’s popular waterfalls) and the famous Vik beach.

The drive is about 320 kilometres — a fairly lengthy drive that will take about four hours. Turn left when you reach the signs for Skaftafell National Park, as this is where you will find access to the Öræfajökull volcano. 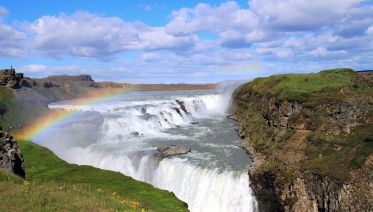