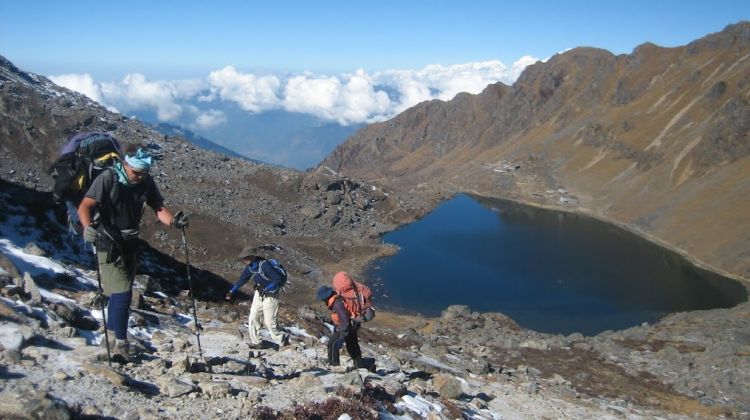 The Gosainkunda trek takes you through beautiful topography and geology, together with varied climatic conditions of Langtang National Park, giving a wide range of vegetation types (including a sub-tropical forest). The Gosainkunda area is covered with 108 holy Lakes. Culturally the area is a mix of several ethnicities including Tamang, Sherpa, Cherti and Brahman people.

The Gosainkunda trek follows a rough trail with dramatic views towards of Mt. Himal Chuli (7893meter), Mt. Manaslu (8156meter) and Mt. Ganesh Himal (7406m). On a clear day, even the Annapurna range can be seen rising up behind and to the north across the valley is Langtang Lirung, the Langtang Range's highest mountain with its 7227 meters.

After reaching Laurebina La we cross a small ridge and have our first views of the holy Gosainkunda lakes. In the Gosainkunda region there are numerous lakes. The main three are Saraswatikunda, Bhairabkunda, and Gosainkunda. According to the legend, Shiva created Gosainkunda when he pierced a glacier with his trident to obtain water to quench his thirst after having swallowed poison that threatened to destroy the world.

Please see the itinerary for a day-by-day route.
View More
CUSTOMER REVIEWS
5 - Excellent
Based on 4 reviews
G
5 - Excellent
Great, even in the monsoon
“We went to Gosaikunda in the monsoon but still got visibility of the lake. On the way up and down the view was obscured by clouds but I have uploaded some photos of the views we were able to see.”
s
5 - Excellent
Excellent
“Excellent”
T
5 - Excellent
Great trek
“First time in Nepal, amazing experience. Organisation was tip top. We had very good times. Our guide was very flexible to let us enjoy as much as we can.
I recommend this trek to everyone.”
J
5 - Excellent
Review of Gasainkunda Trek from Justin and Josh
“The Gosainkunda Trek was amazing and my brother and I had a wonderful time with the Green Valley Trek guide Lax. I would highly recommend this Trek as you will not be disappointed at what you will see and the people along the way you will meet.”
ITINERARY
Alt. in: ALTITUDE MAP
Expand All
WHAT'S INCLUDED OPTIONAL ADDONS (Available during check-out) WHAT'S EXCLUDED
Why Book with Bookmundi
What are customers saying about Bookmundi
Excellent
4.68 Average 345 Reviews

QUESTIONS AND ANSWERS Find answers to the most frequently asked questions about this tour.
Read more questions and answers
NEED HELP OR HAVE A QUESTION ABOUT THIS TOUR?
If you have any question about this tour or need help with planning a trip, please do not hesitate to get in touch with us. We're ready to help.
Get help
days 07 From US$ 405 See Group Discount
CHECK AVAILABILITY
Response Time: 2 hours Response Rate: 100% MAKE AN ENQUIRY