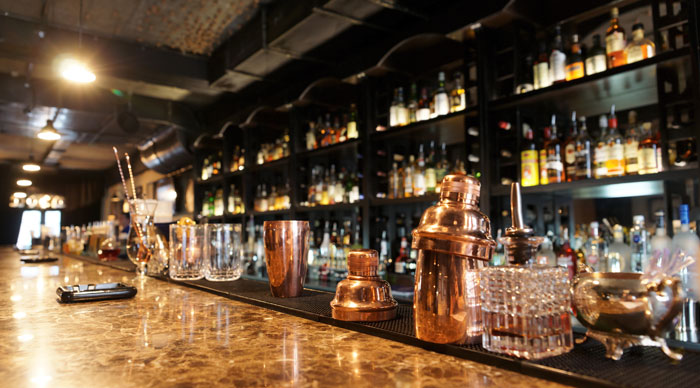 Sure, major cities such as London and New York have more than one bar that should have made this list, but we’ve tried to restrict ourselves to one bar per city, to introduce you to some of the top drinking holes around the world.

Candelaria has been finding a place among the best bars year after year thanks to its inspired cocktails, tasty tacos and hippy decors. The bar attracts all types of people and its drinks are known to have a personality of their own. The kitchen has a Mexican theme, but French ingredients often find their way into dishes.

Smuggler’s Cove is becoming a reference point for all things tiki. It actually feels like a bar that was opened by a pirate who traveled all his life and ended his rum-fueled adventures here. The place is a treasure trove of trinkets and sea-faring treasures, but the fantastic drinks ensure that you don’t get distracted by the décor. Each drink presents strange ingredients that combine to offer an exceptional night of drunken adventures.

Despite its name, Nottingham Forest has nothing to do with its namesake, the football club plying its trade in the English Championship. The cocktail bar presents a fantastic list of cocktails that celebrates mixology at its masterful best. Buddha statues, Asian knick-knacks, exotic decorations and unique ornaments give the bar an inspired décor and you usually feel as if you’ve just stepped into Lara Croft’s attic. They even have all kinds of innovative cocktails, right from the tablet cocktail to one that is made using lasers.

Aviary finds a place in this list because of its audacious approach to mixology and its spectacular dishes. The guys working in the kitchen love to play with different textures and there is a sense of theater to each and every presentation. Better yet, the drink list is always changing, never standing still and always challenging your taste buds and senses.

28 Hong Kong Street’s website is as simple as it gets. It doesn’t give anything away and you really feel as if it is one of those invitation-only joints. From the outside, 28 Hong Kong Street feels like a 60s store, but it is one of the liveliest bars in Southeast Asia. The drinks revolve around American-styled cocktails, something that is not easy to come by in Southeast Asia. The bar also has a number of wines and craft beers from the US.

Headed by the most celebrated bartender in Japan, High Five has been a constant feature in the list of the world’s best bars. Every bar needs a USP that makes it special, and Ueno’s USP is his diamond-shaped ice that he chips from clear blocks that are delivered daily. Don’t expect to find any menu’s in High Five as Ueno boasts of whipping up something perfect after asking you a few taste and preference related questions.

Baxter Inn finds a place in the list of the best bars in the world after a 3-year gap. You may need your smartphone’s assistance to get to the place, but try and rely on your instincts to actually get inside. A popular haunt among bar pilgrims and Sydneyites, Baxter Inn is almost always crowded and full of life. The star attraction of Baxter Inn is its fascinating whiskey collection. There are more than 600 whiskey brands available at the bar!!

As funny as the name sounds, Dead Rabbit Grocery and Grog is quite serious when it comes to mixology. The bar is run by Sean Muldoon, a perfectionist who demands perfect concoctions for each and every drink served in the bar. The minutiae of ice, duration of the shake, service standards, menu and dilution vs. glass capacity are as good as they get, and they spend a great deal of time and energy in ensuring that everything is perfect. The ground floor presents a laid-back New York vibe, while the upstairs parlor presents the team’s application to detailing each drink and offering jaw-dropping menus. The service has a genuine Irish-American feel and the awards haven’t stopped coming in ever since the bar opened its doors.

Artesian has managed to hold onto the top spot for three years at a stretch. They say that there are bars, and then there are the best bars, and then there is the Artesian. Its cocktail menu deserves recognition and for good reason. The menu manages to effortlessly blend that classic reverence with modern innovation to present a range of cocktails that are a treat for your taste buds as well as your eyes. And it isn’t just about cocktails. Its list of gin, rum and tonic variations remind guests that they’ve entered a traditional British establishment.  The décor offers a classic hotel style, but the bar also has austere features, opulent fabrics and glamorous glassware. What truly sets Artesian apart from the rest is its service. The staff make you feel warm without compromising on fashion. The unrelenting exhibition of courtesy is as effortless as it gets.

Luxury hotel bars and classic cocktail dens were joined by salons and clubs in Drinks International’s list of the world’s best bars. A trip to any bar on this list introduces you to inspired cocktails and menus and the art of mixology at its beautiful best. Most establishments might be a bit heavy on your wallets, but each one is sure to take your breath away with its fascinating selection of drinks, inspired cuisines and beautiful cocktails.