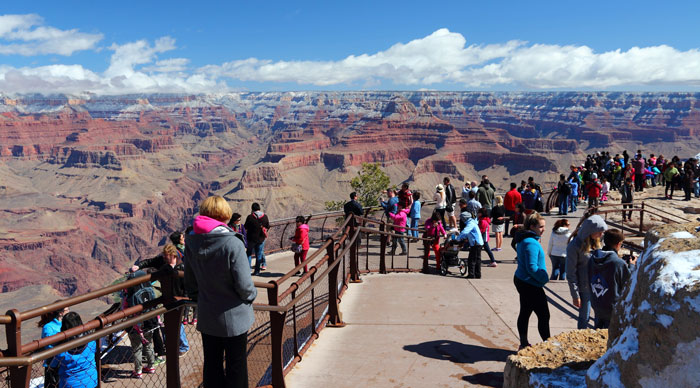 There are all kinds of things that can leave you breathless in so many ways. Adventure activities are a popular way to get your adrenaline rush, but visiting the world’s best viewpoints also offers an adrenaline-pumping adventure that never ceases to amaze you and leave you speechless.

Each viewpoint in this list offers a larger-than-life image, a once-in-a-lifetime adventure and one of the most special feelings of your life. Without further ado, Bookmundi introduces you to the best viewpoints in the world.

The Grand Canyon attracts more than 5 million tourists each year, and for good reason. The canyon is 18 miles wide at its widest point and 227 miles long. It was formed over a period of 3 – 6 million years and is most famous for its breathtaking views. Standing on the edge of the Grand Canyon rim is an experience that needs to be seen to be fully understood. No matter how many articles you read and how many photographs you see, you can never fully capture the size and magnitude of this incredible wonder until you see it for yourself.

Machu Picchu is one of the greatest unsolved mysteries of history. The city was discovered in the year 1911, but no one really understands the purpose of its existence or the reason for the city being built in such a remote location. Mere mentions of Machu Picchu brings an image of crumbling ruins posing against a beautiful green backdrop to mind and this sight is best seen from the Huayna Picchu viewpoint.  Enjoy mesmerizing views from Machu Picchu as it is located 2430 m (7970 ft) above sea level on a ridge between the Huayna Picchu and Machu Picchu mountains in Peru.

Sky diving over Mount Everest presents a view that leaves you speechless in more ways than one. Not only do you feel that you’re on the top of the world (quite literally), but the sheer altitude and natural beauty leaves you numb and speechless. Mount Everest is the tallest peak on the planet above sea level and a sky-diving adventure saves you from that incredibly difficult trek to the top.

The Maasai Mara National Park is considered to be one of the best wildlife watching destinations in the planet, particularly during the Great Migration phenomenon, when millions of wildebeests and zebras make their way across the plains in search of food and water, with predators such as lions and cheetahs following them in search of prey. The best time to visit the Mara is between the months of July to November.

Sure, underwater adventures are one of the best ways to check out the Great Barrier Reef, but a helicopter ride presents the reef in an entirely new light. The reef system hosts close to 900 islands, 2900 individual reefs and countless cays and is best seen from up above. A helicopter ride lets you glide over the vast blue ocean and take a peek at the dreamy golden colored sands of Whitsunday islands at their beautiful best. Not to mention the romantic heart-shaped reef that takes your breath away!

The Eiffel Tower offers to the City of Light what the Empire State Building offers to tourists in New York. Paris might not have those jaw-dropping skyscrapers, but it certainly boasts of offering a fascinating view once you ride up to Eiffel Tower’s observation deck. The tower rises to a height of 984 ft., making it the second-tallest structure in France. And while there are 1671 steps that lead to the top of the tower, visitors are allowed to climb the first and second tiers only. Bookmundi recommends you to ride one of the two elevators to go to the top lookout for the most breathtaking view in France. And the ideal time to go is about an hour before sunset. Take a  visit to the most wonderful icon of Paris – The Eiffel Tower.

Burj Khalifa, the tallest building on the planet, is a ground-breaking feat of engineering that is most famous for its two observation decks, one on the 124th floor and the other on the 148th floor. There are three ways to check out those splendid views. The first is to make a reservation at Atmosphere, an upscale fine dining restaurant located on the 122nd floor. The second option is to book a ticket to At the Top (124th floor) observation deck. The last and most impressive option is to book tickets to At the Top Sky (148th floor) observation deck where each trip feels like a VIP experience, complete with guided tours and refreshments. Don’t forget to also check out the great view of the Dubai Fountain attraction. 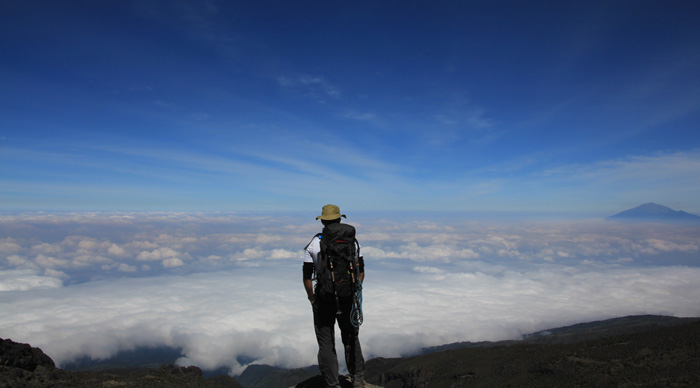 Mount Kilimanjaro, one of the most popular attractions of Tanzania, is the highest mountain peak in Africa. This UNESCO World Heritage Site was formed more than 1 million years ago. Its highest point is Uhuru Peak, one of the Seven Summits of the world, and one of the best viewpoints in the world. The mountain can be climbed round the year and the views from its summit are known to be unlike any other. The best period to visit Mount Kilimanjaro is between the months of June to October. A trip to Mt. Kilimanjaro also introduces you to exotic bird and animal life. Some of the most common sightings include elands, elephants, leopards, buffaloes and monkeys.

They say that it is easy to differentiate between a tourist and a local in New York because most first-time tourists roam around with their mouths open and their eyes looking up. But a better way of checking out the spectacular NYC skyline is to head over to the ESB and take the long elevator ride to its observation deck. Located at a height of 1050 feet on the 86th floor, this observation deck offers spectacular 360-degree views of the NYC skyline and an unparalleled view of the Chrysler Building.

Shanghai Tower, one of the tallest buildings in the world, is a must-see while in Shanghai. Known for its beautiful architecture, Shanghai Tower is a sight that is suddenly finding its way into most bucket lists. The building has 121 stories and is its sky deck is set to become the highest sky deck on the planet above ground level.  Located on the 120th floor of the building, this observation deck even lets you see the East China Sea on a clear day.

A trip to any one of these attractions is sure to offer a view that you’ll cherish throughout your life. We’ve tried to cover the most iconic and anticipated viewpoints around the world, but have surely missed out on a few. Do let us know more about your favorite viewpoints in the world using the comments below.