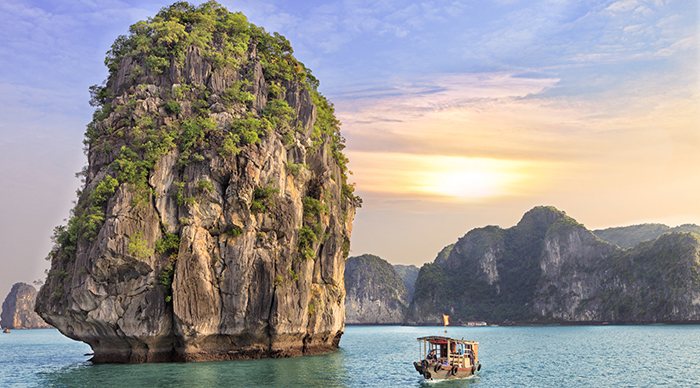 Vietnam is incredibly beautiful and stunningly picturesque. With its varied landscape and topology, Vietnam is a photographer’s paradise.

We have compiled 10 of the best photographs from across Vietnam to give you a picture-perfect view of this splendidly enchanting nation.

Ha Long Bay is a UNESCO World Heritage Site well-known for its extensive network of caves and islands. This picturesque area is very popular among tourists for kayaking, boating and swimming.

Also known as Saigon, Ho Chi Minh is the largest city in Vietnam and boasts of a rich history and elegant colonial architecture.

Nha Trang is a coastal city in south-central of Vietnam popular for its beautiful beaches. Tourists enjoy a variety of activities including high speed-boats,  scuba diving and snorkeling.

Ninh Binh is the old capital of Vietnam most famous for its old temples dating back to the 10th century.  It is a beautiful area with extensive cave systems and spectacular limestone karsts that thrust out from the green paddy fields.

Hoi An is another UNESCO World Heritage Site and an important trading port dating back to the 15th century. This is an exceptionally well-preserved town with buildings and streets that reflect both the local and colonial influences.

Da Nang is the biggest city in Central Vietnam and its commercial and educational center. It is considered a transportation hub because of an easily accessible port, its location on the path of a major national highway and the north-south railway.

Sapa Valley is the main market town in north-west Vietnam and is most famous for being the home of a variety of ethnic minority groups such as Hmong, Tay, Dao, Giay and Pho Lu.

Hanoi is the current capital of Vietnam and the administrative center of the French colony of Indochina. Because of this past, Hanoi boasts of a unique blend of French colonial architecture and the traditional Vietnamese style.

The Mekong Delta is a biologist’s paradise with over a thousand animals species recorded. What’s even more surprising is the fact that new species of plants and animals are constantly being discovered every year.

As the seat of the Nguyen emperors during the 19th century, Hue City has a large number of  historic monuments and  is a UNESCO World Heritage site.

If looking at these beautiful photographs has awakened the traveler inside you, then head on over to BookMundi and book yourself a vacation to this paradise we call Vietnam.