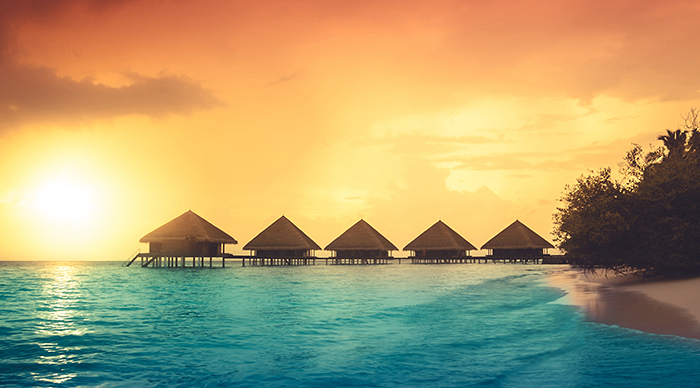 The warm days and lazy afternoons of August are beginning to peak and you’re often wondering whether you can steal a few days from work, visit exotic destinations that let you rekindle your senses, enjoy the summer sunshine while it lasts.

The Maldives (above image)

The island nation is one of the most expensive vacation destinations on the planet. However, you’d want to think twice before giving the Maldives a miss, for August is considered to be an off-season for the country and many hotels and resorts drop down their prices by as much as 40%, suddenly making the Maldives way more economical. Many hotels also start throwing in a number of extras, and while you can expect the odd five showers a week, storms are usually shorter in duration around August. The crystal clear waters still offer mesmerizing diving opportunities and are teeming with sea turtles, whale sharks and more.

While Serengeti has overtaken the Mara as the more popular national park to witness the Great Migration, Maasai Mara comes on its own in the month of August. August is cool and dry in Kenya and it signals the start of the Great Migration phenomenon, often called the 8th natural wonder of the world. You get to see millions of zebra and wildebeest begin their annual pilgrimage to the Serengeti and the sheer number of wildlife spotting opportunities makes this month perfect for visiting Kenya.

The Big Bend National Park is famous for its crystal clear skies and pristine surroundings. In fact, it is considered to be the least polluted national park in America, and this makes it the perfect spot to see the stunning Milky Way. Big Bend feels even more special during the month of August due to the Perseid meteor shower, often called the best meteor shower on the planet. Just make sure that you don’t forget to pack some stargazing equipment.

August is the best time to visit the world-famous Galapagos Islands, one of the best places for wildlife lovers. The island boasts of having a rich plethora of species, many of which cannot be seen anywhere else on the planet. The weather cools down by the month of August and a feeding frenzy dawns on the area’s wildlife, leading to spectacular scenes all around. From the sea lions of San Cristobal and Sperm whales of Isabella Island to the penguins of Fernandina and giant tortoises of Santa Cruz, just about everything feels more beautiful and special.

Kazakhstan is at its magnificent best when the temperatures come closer to 30 degrees C. The steppe grass becomes particularly beautiful in the month of August and many of the mountains in the country are at their visual and hospitable best. You can literally pitch your tent wherever you like and popular landmarks such as the Charyn Canyon are primed for explorations. The long evenings are ideal for exploring the country’s burgeoning café culture or simply sipping on some of the dessert wine produced in the region.

Iceland is one of the most unforgiving destinations during the winter season. The roads are blocked with ice, most museums are closed and many parts of the island are rendered inaccessible. However, come summer, the place transforms into a heavenly oasis that enjoys about 20 hours of sunlight and presents some of the most spectacular settings on the planet. The rolling landscapes promise incredible horseback rides while the Westfjords offer an experience of their own. What makes August the perfect time to visit Iceland is the fact that you get to watch adolescent puffins begin to take flight from their nests for the first time, a must-see sight for bird lovers.

Visiting the national parks of America during mating season is sure to be one of the best experiences of your life. But if you’re planning to head over to the Yellowstone National Park in the month of August, you’re truly in for a visual treat. You can see herds of bulls come together, courting females, trying to assert their dominance, their roars echoing throughout the valley. Simply park close to a herd and turn off your engines and watch majestic bison’s pitch side by side, all feet in the air.

Step back in time as you visit Visby, a stunning town located on the island of Gotland, Sweden. For seven days in the month of August, this enchanting town gets stuck in a time warp as it begins to resemble the romantic Middle Ages and celebrates all kinds of ancient practices and traditions. Its ancient walls host all kinds of banqueting and jousting while the markets and public areas offer access to medieval style storytelling and music. Medeltidsveckan is perhaps your best bet of enjoying unashamed revelry without having your own Tardis.

Prices begin to drop in the Caribbean towards August as rain becomes a constant menace, spoiling those sun and sand moments. However, the island is also at its greenest best during the month of August. Book a yacht and live life large or simply pick an island and call it your own for a few days. Visit award-winning restaurants, spend time in dreamy villas and look out for the Breadfruit Festival, a celebration which pays tribute to the island’s heritage.

Nevada. The state that makes everything seem wilder, bigger, better and more glamorous. From the lights of Sin City to the stunning Mojave Desert, the state has truly pioneered the way the world looks at travel. And come August, there’s an entirely new reason to visit Nevada: the Burning Man. This epic music festival has already developed a cult-like following and thousands of individuals make the annual pilgrimage to Black Rock City, a temporary community created from desert sand for a week-long adventure with music, camaraderie and party.

From spotting a whale along the west coast of Australia to encountering millions of animals in the green lands of Africa, the month of August has all kinds of special experiences in store for you.

Don’t forget to check- out Bookmundi‘s list of the 10 Adventures to Try in Your Lifetime and The 10 Most Beautiful Places in the World for a life-changing experience.