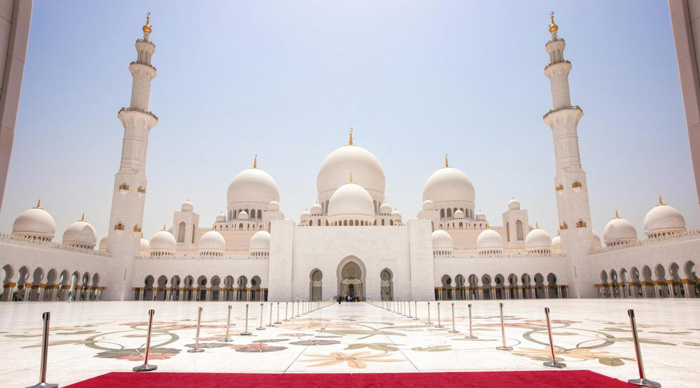 Now would be the ideal time to visit Abu Dhabi as the temperature cools down and the festivities begin. Visitors from all over the world come to this glittering city of gold to enjoy modern-day delights, outlandish architecture, beautiful locales, exotic food and an ancient culture. Bookmundi presents a list of things to do in Abu Dhabi to help you include the very best sights and delights into your itineraries.

If you’re searching for an emotionally moving experience while in Abu Dhabi, all you have to do is visit the Grand Mosque. The resting place of Shaikh Zayed Bin Sultan Al Nahyan, the founding president of the UAE, Grand Mosque is the third largest mosque in the world. It boasts of the largest dome, the largest chandelier and the largest hand-knotted carpet in the world and has as many as 1048 columns and 82 domes. The mosque boasts of a classic architectural style and presents a beautiful combination of exotic construction materials such as fine ceramics, crystals, semi-precious stones and Italian marble. Non-muslims are also allowed to enter the mosque, but only when accompanied by an Emirati guide. And as Rihanna recently demonstrated, if there is time for only one thing to do in Abu Dhabi, you need to visit the Sheikh Zayed Grand Mosque.

The Corniche is a 4-mile promenade that offers one of the best places to start off your explorations in Abu Dhabi. You can stroll through the entire area in a single afternoon and catch a glimpse of some of the greatest sights in the country such as the Capital Gate building with a lean of 18 degrees (Pisa’s lean is four degrees), the emirate’s flag on top of a 360ft pole and The Avenue at Etihad Towers. The Corniche is an ideal spot for an evening walk and you can easily walk from any one of the Corniche hotels to the Heritage Village and Marina Mall along one of the well-lit pathways. Other areas of interest include a family beach, several ice cream shops and cafes and beach volleyball courts.

The Abu Dhabi Heritage Village is the perfect place to take a peek into the country’s past. From spice shops and Bedouin tents to museums, stalls and photography exhibitions, the Heritage Village has everything you could possibly need to experience the rich and beautiful culture of Abu Dhabi. The village gives you an insight into life before the discovery of oil in the UAE, life that still exists in many parts of the Arabian Peninsula. Some of the main highlights at the Abu Dhabi Heritage Village include a simple mosque, a souq, the barasti house, Bedouin tents and excellent displays of traditional jewelry. Women can even get a traditional henna tattoo at the Women’s Handicraft Center. 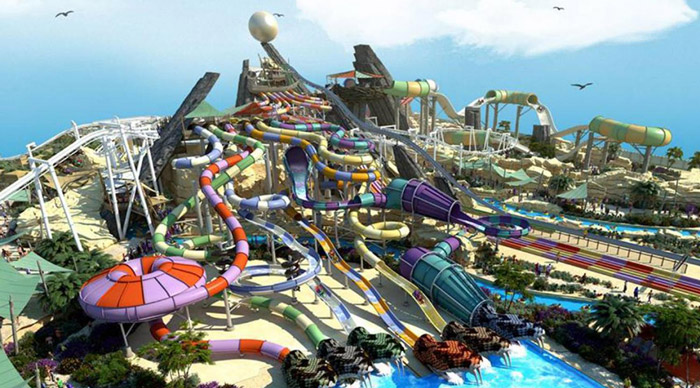 Yas Water World, the first mega waterpark in the UAE, promises an unforgettable experience for each tourist visiting Abu Dhabi. It offers 43 slides and attractions and unique rides that have never found their way in a waterpark before. When you come upon Yas Water World, it looks fairly small, and you begin to wonder how to spend your time. However, as the island begins to unfold its layers in front of you, you come to realize that there are more than enough things to see and do across four ‘thrill’ levels for the entire family. Some of the main highlights of Yas Water World include a pearl diving experience, an interactive treasure hunt, the Bandit Bomber roller coaster and the Falcon’s Falaj ride. 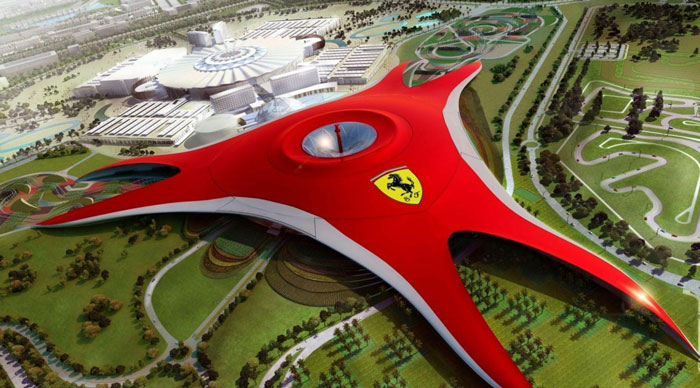 Ferrari World introduces you to a world of thrills and frills through entertaining rides, themed restaurants and stores that have been inspired by Ferrari, one of the greatest automobile brands on the planet. The park boasts of as many as 20 rides and attractions that attract people from each and every age group. From advanced simulators and speed thrills to mouthwatering dishes and exciting shopping experiences, Ferrari World really has it all. The biggest highlight here is the Formula Rossa, the world’s fastest rollercoaster that touches 150mph. The Formula 1 Race Track of Abu Dhabi is also located here.

Manarat Al Saadiyat, also known as the place of enlightenment, is an ideal way to understand the vision involved in creating the central hub of a city from scratch. The visitor center houses a beautiful display of the architectural models that are involved in showcasing the key destinations that have been planned for the Central District. The place also hosts a permanent exhibition that highlights the history of Abu Dhabi as it transformed from a small pearl village to an international metropolis and a contemporary gallery that hosts numerous international exhibitions. The highlight of Manarat Al Saadiyat is the Saadiyat Experience, which displays models of the Abu Dhabi Louvre, Guggenheim Abu Dhabi and the Sheikh Zayed National Museum.

There is nothing more beautiful than sitting by the harbor watching old wooden boats sail into the sea. You can find fishermen mending their nets and piling up lobster pots throughout the day or watch dhows resting against each other against a backdrop of jaw-dropping architecture which lets you live the illustrious present and the ancient past of Abu Dhabi in the same moment.

If you’re looking for a unique way of exploring the sights and landmarks of Abu Dhabi, think about checking them out while on water. Become a part of a guided speedboat tour of Abu Dhabi which introduces you to some of the most amazing sights of Abu Dhabi that can never be seen from land. The main landmarks covered during the speedboat tour include the Emirate Palace Hotel, Heritage Village site, the Corniche, Lulu Island and Fisherman’s Village. 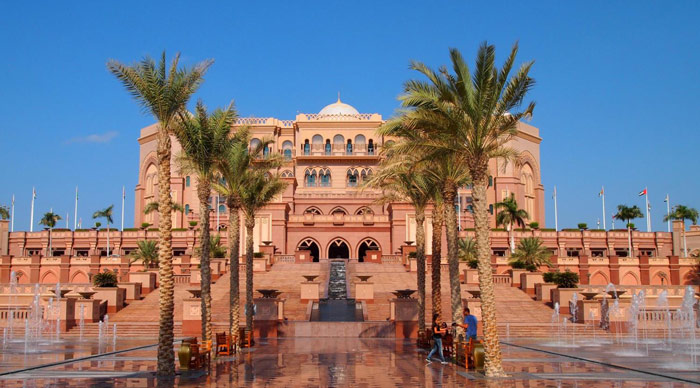 The Emirates Palace is certainly one of the most jaw-dropping sights in Abu Dhabi. This seven-star hotel is spread over 100 hectares of land on the corniche and is an architectural wonder that takes your breath away. The Emirates Palace is to the horizontal what the Burj Khalifa is to the vertical. The audacious interiors are decorated using pearl, gold leaves and marble and it features 1002 gold chandeliers, a 1.3km private beach, 400 luxury rooms and suites and 114 domes. Some of the main events held at the palace include Abu Dhabi Classics concert season and the Abu Dhabi Film Festival. It is also home to the Barakat Gallery which hosts fine art from Rome, Greece, Egypt and China. 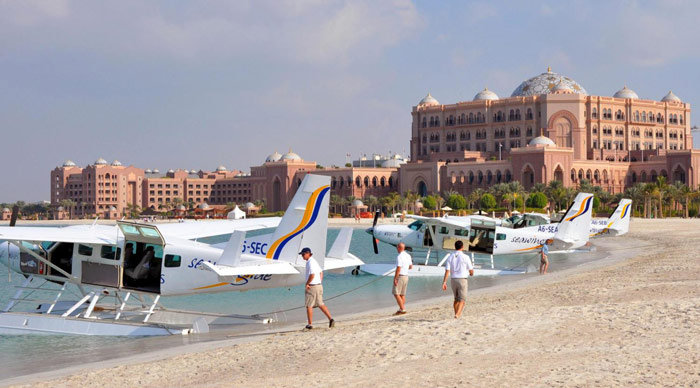 A seaplane tour is another exciting way of exploring Abu Dhabi in an entirely new light. It offers beautiful bird eye views of the Yas Marina and the Emirates Palace as well as attractions such as Ferrari World, Corniche, Zayed Bridge, Khalifa Port and more. Your seaplane tour also introduces you to the stunning natural beauty of Abu Dhabi, best seen through those mangrove forests located along the shore.

The Abu Dhabi Louvre might have seen a few delays in its opening, but it still remains to be one of the most anticipated projects in the city. The Louvre Abu Dhabi has an elaborate filigree domed roof which hovers over the structure to create a beautiful display of light in the interiors. The museum is all set to have one of the leading collections of arts and artefacts from around the world, including a number of masterpieces on loan from French museums. The museum might still be under construction, but you can check out a full-scale model at the Saadiyat Experience in Manarat Al Saadiyat.

The Marina Mall is a haven for shopaholics visiting the city. Home to over 400 stores, the mall includes a tiny ice-skating rink, a multiplex cinema, a humongous activity center for kids, a rollercoaster, dodgem cars and Fun City.

Abu Dhabi might not be as sophisticated or cosmopolitan as its next-door neighbor, but it also lacks the traffic jams, crowds and fast-paced lifestyle which make Dubai a pain. Considered to be a much better place to live in, Abu Dhabi is perfect for travelers wanting to explore the very best of modern architecture and cosmopolitan lifestyles without having to put themselves through the fast paced ideas of Dubai.