Home to one of the densest mammal populations in the world, the Ngorongoro Crater is your best chance of seeing the Big Five: African lion, African elephant, Cape buffalo, African leopard, and Rhinoceros. Other animal sightings include gazelle, wildebeests, zebras, cheetahs, golden jackals, and topi. The crater itself might be compact in size when compared to other national parks in Tanzania, but it still boasts of more than 500 bird species.

A Ngorongoro safari is always exciting because you can see animals in every direction from your vehicle. Spotting the Big Five in one single day is highly likely and you can even get out of your vehicle in select locations.

The Ngorongoro Crater might cover an area of 100-square-miles only, but it still manages to pack in as many as 30000 animals and hundreds of exotic bird species.

Know what that means?

You’re guaranteed to come across some of the superstars that make African safaris so famous. Apart from boasting of the densest population of lions and as many as 2 dozen black rhinos (yes, that’s a lot for this critically endangered species), Ngornogoro also hosts the wildebeest, buffalo, zebra, cheetah, hippo, hyena, giraffe, leopard and golden jackal.

With more than 500 species of birds on display, bird lovers are sure to have a blast as well. Livingstone turaco and white-eyed slaty flycatcher are stars of the show, but watch out for other popular residents such as ostrich, secretary bird, crowned crane and kori bustard.

And if you’re an avid bird lover, make sure you visit the Ngorongoro between the months of November to April, when you also get to see all kinds of migratory birds.

Located at a distance of 180 kms. to the west of Arusha, this UNESCO World Heritage Site is home to the iconic Ngorongoro Crater, a stunning volcanic caldera that is considered to be one of the most beautiful natural wonders of the world.

A safari in Ngorongoro is full of adventure and wildlife, but there are all kinds of sights and attractions that demand your time. Apart from the caldera itself, you can also visit the Olduvai Gorge, popularly called the ‘cradle of civilization’.

Click here to see the top things to do in Ngorongoro Crater.

From budget camps and country cottages to eco-lodges and luxury oases, you have all kinds of options to choose from while visiting the Ngorongoro. Accommodation near the crater can offer every modern amenity and world class service you expect from the most exclusive lodges on the planet, but it can also provide that authentic bush experience.

Click here to find out where to stay when visiting the Ngorongoro Conversation Area.

The animals at the Ngorongoro Crater can be seen throughout the year, and you can be rest assured of fantastic safari experiences regardless of when you visit.

The best time to visit Ngorongoro Crater is during peak season (July - October) with little to no rainfall. However, a large number of tourists visit during this period and the place can get crowded.

To avoid the crowd and enjoy a quieter experience, you can visit Ngorongoro Crater during low season (January - April). However, heavy rainfall may dampen your plans to some extent.

Most Ngorongoro safaris start at Arusha and the park is often combined with Serengeti tours as well. Fly into the Kilimanjaro International Airport to reach Arusha, and you can choose to fly into the crater via small charter planes or drive up to the crater by road.

Ngorongoro is located at a distance of 154 kms. (95 miles) from Arusha and the journey can take between 2 – 4 hours.

Tours and Holidays in Tanzania
Previous Next
View all Tanzania Tours
Published by Rasmus Juul Olsen, updated on May 11, 2021
Tweet
Create your custom-made trip to Tanzania 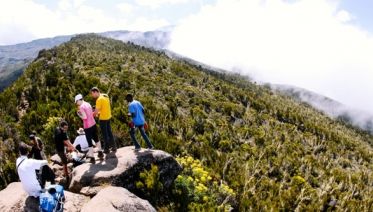