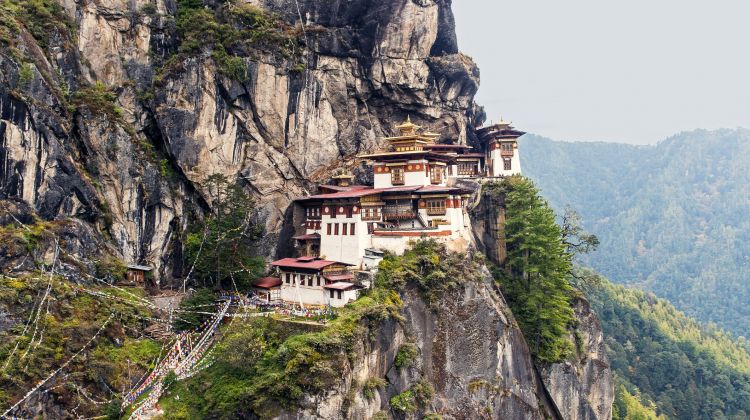 HIGHLIGHTS
This 4-day, guided Bhutan tour is designed for those interested in seeing the major landmarks of the Paro Valley and Thimphu in the shortest possible time. A valley city with rich traditions and history, the valley also hosts Bhutan's only international airport.

We will pick you up upon arrival in the country and drive you to your hotel. Enjoy a guided, city tour of Paro. See some of its most impressive monuments, including Jangtsa Dumtseg Lhakhang, a 15th-century Buddhist temple; Rinpung Dzong, a Buddhist monastery and fortress; Bhutan's national museum; and Kichu Lhakhang, the oldest temple in the country.

Hike to the extraordinary Paro Taktsang, popular all over the world as Tiger's Nest, before heading for Thimphu, the largest city in Bhutan that is situated in the linear valley of the Thimpu River. See important landmarks of the city such as the National Memorial Chorten, Drubthob Goemba and the majestic Tashichho Dzong as well as the gigantic Buddha Dordenma.

Your trip comes to an end in Thimphu from where we will drive you to the airport. for more details, please go through the itinerary below.
View More
CUSTOMER REVIEWS
5 - Excellent
Based on 9 reviews
R
5 - Excellent
Short Trip to Bhutan
“my first time to Bhutan.Feeling peacefully escape from buzzle hustle city. I go there with help of alpine club of himalaya. They organize my trip very well. i feel very comfort travelling with their arrangement. Thx Sujan from Alpine”
Alpine Club of Himalaya responded to this review on 26 Aug 2020: “Dear Guest,
Namaste and greetings from Alpine Club of Himalaya!!!!

From your ratings of Alpine Club, I believe you and your friends have enjoyed your holiday tremendously with our arrangements of the best put together itinerary to cater to your want to do list of activities and the places/regions you like to visit while in Nepal.

We are committed to provide good and reliable services at reasonable pricing to our visitors to have an enjoyable and memorable holiday with a difference, ie, something exciting to do, something special, and something you would like to experience.

We are truly delighted that we were given the opportunity to be of service to you and friends and we look forward to your next visit to Nepal to provide you and your friends/relatives for greater adventures in the ‘Walk of the Himalaya’.

Alpine Club beckons you, to greater adventures in the Himalayas…..


”
A
5 - Excellent
Best Agent
“23
23
”
A
5 - Excellent
Love paro and thimphu so much
“Great view and peacefully place. Hope can back there again as soon as possible. Love Bhutan so much”
Read more reviews
ITINERARY Expand All
WHAT'S INCLUDED WHAT'S EXCLUDED
Why Book with Bookmundi
What are customers saying about Bookmundi
Excellent
4.70 Average 335 Reviews

Other Practical InformationSpring (March to May) and autumn (September and October) are the best seasons to visit Bhutan. January and February are cold, but from then until April the climate remains dry. Bhutan observes its biggest festivals during the spring season and in late spring the famous rhododendrons bloom spectacularly, flooding the valleys with their color. From June to September, monsoon clouds cover the hills and mountains.
NEED HELP OR HAVE A QUESTION ABOUT THIS TOUR?
If you have any question about this tour or need help with planning a trip, please do not hesitate to get in touch with us. We're ready to help.
Get help
days 04 From US$ 875 See Group Discount
CHECK AVAILABILITY
Response Time: 1 hour Response Rate: 100% MAKE AN ENQUIRY