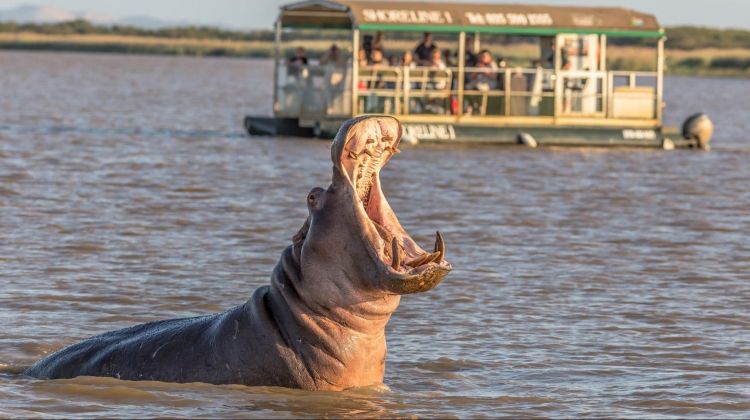 HIGHLIGHTS
When one thinks of African wildlife, the image of the expansive savanna plains come to mind. On this guided day tour, experience the massive biodiversity of the continent through a different vantage point: St. Lucia coastline. Afterwards, experience Zulu culture unaffected by modernization at DumaZulu Cultural Village.

The tour departs from Durban along the coast to northern KwaZulu-Natal. The first stop is the small town of St Lucia inside the iSimangaliso Wetlands Park. There you will board a river boat for a two-hour guided tour of the estuary. A local guide will inform you of the park's history and inform you about its incredible wildlife whilst cruising along the estuary on a boat safari.

The iSimangaliso Wetlands Park was declared South Africa's first Natural World Heritage Site in 1999. Previously known as the Greater St. Lucia Wetland Park, the UNESCO site dates back over 120 years. Established in 1895 the reserve is considered South Africa's third largest park with its unique ecosystem spanning over 280 km of near pristine coastline and 328,000 hectares of expansive land. The protected area is home to one of the largest population of hippopotami in South Africa and an estimated 1,000 crocodiles.
iSimagaliso has a wealth of plant, bird and animal life, including lions, zebras, African elephants, leopards, giraffes, white rhinos and fish eagles. Then head to DumaZulu Cultural Village.

DumaZulu Cultural Village is located near the Hluhluwe-Imfolozi Game Reserve in the heart of Zululand. Translated to “Thundering Zulu,” DumaZulu is South Africa’s largest Zulu cultural village with over 50 Zulu locals who living and working in the area.

The village depicts Zulu culture before modernization and is considered a living museum. The village is laid out in the tradition Zulu design of beehive huts arranged in a circle around a cattle kraal. You’ll be welcomed to the village by a local DumaZulu tour guide who’ll explain and share interesting traditions and customs of the Zulu people.

You can observe the traditional basket-weaving, spear- and shield-making techniques from the locals as well as watch traditional bone-throwing and Zulu dancing and singing performances.

Other Practical InformationPickup & dropoff service within a 10 km radius of Durban Wear comfortable clothing, hat, sunscreen and jacket Departure time is at 7 am and return at 6 pm For special travel arrangements, contact +27 827766771/ 31 3373103
NEED HELP OR HAVE A QUESTION ABOUT THIS TOUR?
If you have any question about this tour or need help with planning a trip, please do not hesitate to get in touch with us. We're ready to help.
Get help
hours 11 From US$ 261 See Group Discount
CHECK AVAILABILITY
Response Time: 1 hour Response Rate: 100% MAKE AN ENQUIRY