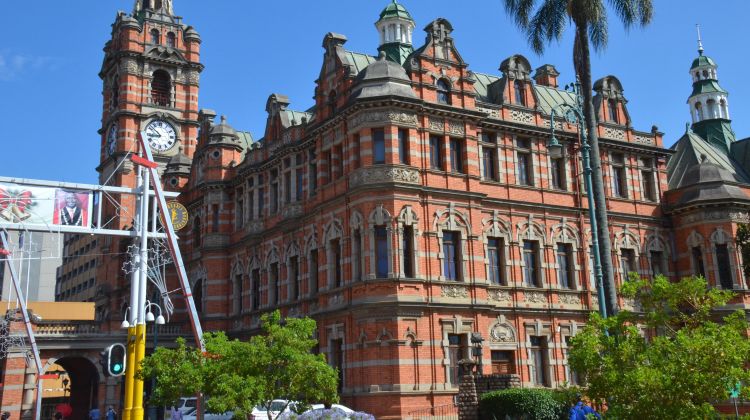 HIGHLIGHTS
Explore the history of KwaZulu-Natal, the distant and the recent, on this guided tour. Learn about the struggles during and the triumphs over the apartheid as well as get a glimpse of Zulu culture before the dawn of the 20th century. End the day with a thrilling visit to a reptile park.

The tour departs from Durban for the capital of KwaZulu-Natal, Pietermaritzburg. Your guide will give you a short tour of the city, including Mahatma Gandhi’s statue by Pietermaritzburg City Hall.

Next stop will be the small town of Howick to visit its waterfall. KwaNogqaza or Howick Falls is approximately 95 metres in height and lies on the Umgeni River. The local Zulu people named it the “Home of the Tall” referring to its height. Next to the fall lies a quaint old section of Howick that houses a number of historical museums and antique stores.

The local PheZulu guide will take you on a guided tour of the PheZulu sibaya and explain the Zulu cultural practices to gain insight into Zulu traditions during the 1800’s. The local Zulu dancing show serves both educational and entertainment purpose as local performers sing and dance to beautiful traditional Zulu songs with complete Zulu attire.

PheZulu also has the Reptile Park. The local guides are very knowledgeable and eager to take you around the park and share interesting facts about the animals in the park. PheZulu Reptile Park has diverse reptilian wildlife on site, including crocodiles, alligators, snakes, tortoises and iguanas. The guides will let you touch or hold some of the animals, including a small crocodile and the giant Burmese python, just long enough to take a photo.

Other Practical InformationPickup & drop off service within a 10km radius of Durban. Wear comfortable clothing, walking shoes, hat, sunscreen and jacket
NEED HELP OR HAVE A QUESTION ABOUT THIS TOUR?
If you have any question about this tour or need help with planning a trip, please do not hesitate to get in touch with us. We're ready to help.
Get help
hours 08 From US$ 212 See Group Discount
CHECK AVAILABILITY
Response Time: 2 hours Response Rate: 100% MAKE AN ENQUIRY