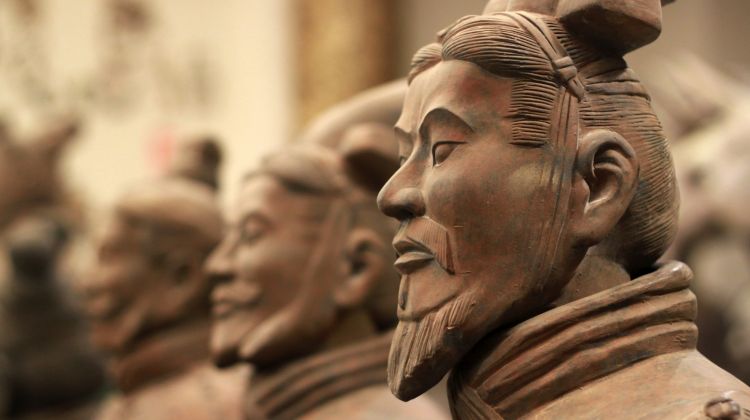 HIGHLIGHTS
Book this 4-hour, guided tour and get the chance to see what is widely considered to be one of the most significant archaeological discoveries of the 20th century: the Terracotta Army. Meet your guide at the lobby of your hotel in Xian city centre to start this tour. You can choose the morning shift that starts with a pickup at 8:30 AM or go for one starting at 1:00 in the afternoon.

Head for Terracotta Warriors and Horses Museum. See life-size terracotta figures arranged in a typical battle formation, in 11 columns, comprising officers, soldiers holding spears and swords and others steering horse-drawn chariots, as if ready for one last battle. These figures are replicas of what Qin Shi Huang’s (the first emperor of China) imperial army looked like 22,00 years years ago.

Different pits in the museum have different figures – ranging from military personnel to musicians, acrobats and strongmen. After you are done exploring the museum, we will take you to an arts and crafts factory where you’ll get the chance to see terracotta army statues being made and have the opportunity to buy one if you want to.

We will transfer you back to your hotel in Xian after the trip is over.
View More
CUSTOMER REVIEWS ABOUT VARIARTS TRAVEL
5 - Excellent
Based on 8 reviews
A
5 - Excellent
Review for another Variarts Travel tour
“We had only one day in Beijing in a stop-over to Japan, and we wanted to visit the great wall of China! They picked us up directly at the airport and transfer us to the great wall. It was so beautiful! Then they left us back at the airport for our flight to Tokyo”
A
5 - Excellent
Review for another Variarts Travel tour
“Nothing like u would expect to see in china! Great show for a relaxing Friday night!”
A
5 - Excellent
Review for another Variarts Travel tour
“really nice tour in Huangshana really wonder never seen before. I love hiking and this place is really my type. The pines, the peaks, the sea of clouds and the spring are all excellent.really enjoys the tour. great!!!!”
Read more Variarts Travel reviews
WHAT'S INCLUDED WHAT'S EXCLUDED
Why Book with Bookmundi
What are customers saying about Bookmundi
Excellent
4.68 Average 345 Reviews

NEED HELP OR HAVE A QUESTION ABOUT THIS TOUR?
If you have any question about this tour or need help with planning a trip, please do not hesitate to get in touch with us. We're ready to help.
Get help
hours 04 From US$ 105 See Group Discount
CHECK AVAILABILITY
Response Time: 2 hours Response Rate: 100% MAKE AN ENQUIRY