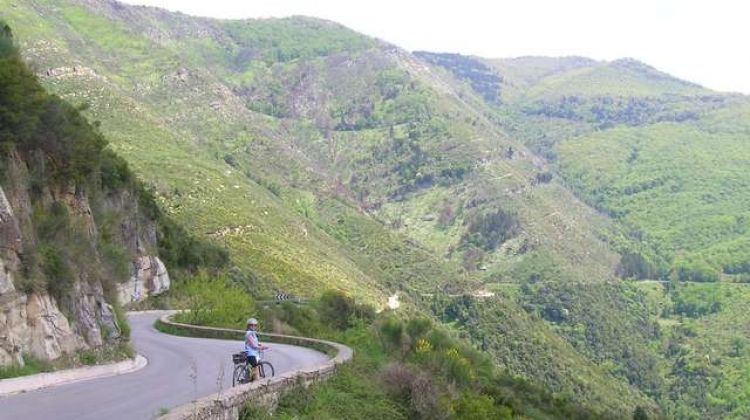 HIGHLIGHTS
Explore the beautiful, culturally-rich but lesser-known and uncrowded area of the Cilento National Park by bicycle on this self-guided 9-day cycling tour.

The region of Campania has been known as a paradise on earth since ancient times. The Greeks built some of their most impressive temples here and under the Romans it became known as ‘Campania Felix’, or the Happy Land. When travelling through this region it is easy to be overwhelmed by the wealth of cultural and natural attractions, from the great city of Naples to the well-known Costiera Amalfitana, with its towering cliffs and picturesque coves.

But Campania’s real secret is located south of Salerno. Here, the coastline bulges out into an expanse of mountainous landmass known as the Cilento, now one of Italy’s biggest National Parks, with World Heritage listing.

This tour brings you into the real ‘Heart of the Cilento’, from ancient Paestum up to Monte Stella, and along the pristine Cilento coast towards the impressive Alburni Mountains. Inland, the Cilento is largely undisturbed by the 21st century and you will encounter few other tourists along your way. You will cycle past world-famous cultural sites, through pristine natural areas and dreamy coastal scenery. Your trip will take you on small country roads passing through rough mountain scenery, as well as attractive countryside, with vineyards and olive groves.

The first few days you will stay close to the coast, only occasionally reaching some small hamlets on the foothills further inland. You will go past the archaeological site of Paestum on your way to a genuine mozzarella farm and climb up to some nice viewpoints on the coastal plain. Further on you will cycle around Monte Stella, dotted with several typical medieval hamlets, and continue along the coast towards the tiny fishing villages of Acciaroli and Pioppi to the Greek site of Velia.

You then turn inland and discover the rolling foothills around lovely Ceraso before climbing up along the Calore River to the hamlet of Piaggine, located in the very heart of the Cilento National Park. Here you’ll visit some of the nicest medieval villages in the area, where the traditional way of life is still evident. And you’ll enjoy visiting some of the Cilento’s greatest (but unknown) cultural treasures, like St. Michael’s cave church in Sant’Angelo a Fasanella, the ruins of Roscigno Vecchia and the castle of Laurino. All connected by great well-paved and quiet roads, ideal for cycling.

NEED HELP OR HAVE A QUESTION ABOUT THIS TOUR?
If you have any question about this tour or need help with planning a trip, please do not hesitate to get in touch with us. We're ready to help.
Get help
days 09 SavingUS$ 48
You have unlocked exclusive savings:
5% OFF TODAY From US$ 952 US$ 904
CHECK AVAILABILITY
Response Time: 3 hours Response Rate: 100% MAKE AN ENQUIRY