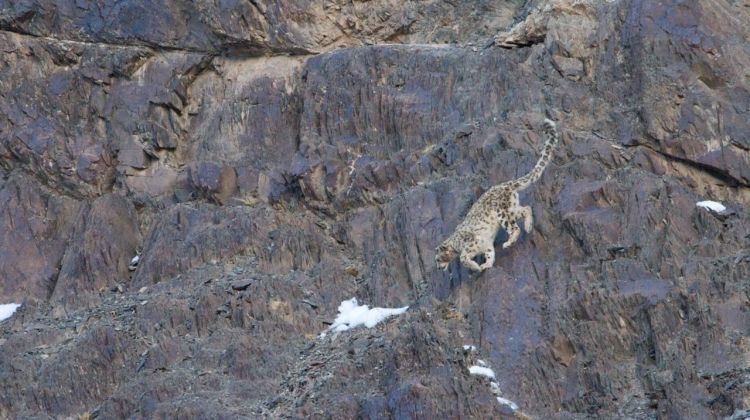 Snow leopards are one of the world's most elusive mammals but in winter they descend from the high Himalaya in search of food. Inhabiting some of the most remote and mountainous regions of Central Asia, the mission to see this enigmatic cat is really more of a pilgrimage. Other rare high altitude wildlife and isolated Himalayan Buddhist communities only add to this quest's allure. The itinerary varies slightly by departure date to fit in the different festivals. All departures led by specialist Himalayan trekking guide Valerie Parkinson. [[{"fid":"266076","view_mode":"default","fields":{"format":"default"},"type":"media","field_deltas":{"3":{"format":"default"}},"attributes":{"height":"391","width":"345","class":"media-element file-default","data-delta":"3"}}]]Valerie was born by the seaside in Blackpool and spent much of her younger days walking with her parents in the Lake District. After finishing her studies, Valerie worked in Germany and Switzerland, until 1984 when she took a break that would change her life forever. She travelled to India for a three-week trek through Kashmir and Ladakh and found her spiritual home in the high Himalaya and developed her passion for this part of the world. Valerie has spent the rest of her life leading treks (and bike trips) in the Himalayan Region and her knowledge of the culture, religion, art and wildlife of the area is second to none. Her enthusiasm for trekking developed into climbing and in 2008 Valerie became the first British woman to summit Mount Manaslu at 8,163m, without the use of supplementary oxygen, and in 2009 she attempted Everest. Over the years Valerie has been instrumental in setting up and running Himalayan Community Projects which now operate through the Exodus Travels Foundation.
View More
CUSTOMER REVIEWS
4.5 - Excellent
Based on 4 reviews
A
5 - Excellent
Wildlife Documentary in Real Time
“Watching snow leopards on a TV in the comfort of your living room may get you close but you cannot feel the environment. By simply being there you can start to feel, appreciate and understand the very essence of the environment they live in and the remarkable way the local population and wildlife interact. 'in Search of the Snow Leopards' is the title of the trip but it is also a trip in search of many things. If ever there was one journey where the multifaceted aspects of geography came together - this is it. The sightings of the snow leopards being the pinnacle.”
A
5 - Excellent
6 Snow Leopards, two Oracles and a Woolly Rabbit!
“Ladakh is a beautiful region of Northern India. Add to that the friendly welcome and the variety of wildlife and culture and you have a destination that it would be hard to find fault with. This was my second visit and this time I was there to see Snow Leopards. Except, of course, they're so rare that the chances of spotting just one would be very low. And indeed spotting just one was impossible - I saw a total of 6 during the 10 days I was there, including relatively close sighting of a mating pair on our first day in the mountains, a mother and her two cubs and a solitary Snow Leopard rolling in the dust to hide its scent before hunting. Our group as a whole saw 12. This amazing tally was due largely to the experience, skill and dedication of the spotting team and our leader, Valerie, who between them took us to the right places at the right time and found the well camouflaged big cats where we may have only seen a buff coloured rock. And let's not forget the Blue Sheep, Lammageier Vultures, Bearded Griffon, Golden Eagles, Woolly Rabbits, Uriel Goats and Alpine Chough.This is a challenging trip - cold, altitude and remoteness all add to the adventure although its well within the abilities of anyone with the right kits and who has trudged the hills in the UK. But it's worth it for the experience of the incredible Himalayan landscapes, the unique culture and the amazing flora and fauna. If you have the chance, book the trip that coincides with the Stok Festival, a colourful and spectacular celebration of Tibetan Buddhism in the form of music and dance culminating in the appearance of the village oracles.”
Cold Ladakh
4 - Very Good
“In spite of the temperature of Ladakh (very cold) we were well looked after by our leader Valerie and the trekking team.”
IN SEARCH OF THE SNOW LEOPARD
4 - Very Good
“My overall rating would have been a 5 'starrer', if we had seen a snow leopard. However, despite recent signs (pug marks, scrape areas and scats) all round our camp, we did not see one of these secretive cats. Anyway I had a great time.”
ITINERARY
Alt. in: ALTITUDE MAP
Expand All
WHAT'S INCLUDED
Accommodation
Meals
Transport
Guide
WHAT'S EXCLUDED
Monthly Price Comparision
Why Book with Bookmundi
What are customers saying about Bookmundi
Excellent
4.68 Average 345 Reviews

No additional cancellation fees apply for this Search for Snow Leopards with Valerie Parkinson tour. You can cancel the tour up to 62 days prior departure and avoid paying the full amount, but your deposit paid is non-refundable. No refund applies for cancellations within 61 days of departure.

For this Search for Snow Leopards with Valerie Parkinson tour getting the required visa(s) is the responsibility for each individual traveller, as visa requirements vary depending on your nationality. We recommend to check with your local embassies representing the countries that you are travelling to, as part of this itinerary.

NEED HELP OR HAVE A QUESTION ABOUT THIS TOUR?
If you have any question about this tour or need help with planning a trip, please do not hesitate to get in touch with us. We're ready to help.
Get help
days 14 From US$ 3,999
CHECK AVAILABILITY
Response Time: 1 hour Response Rate: 100% MAKE AN ENQUIRY

Tour is operated by : Exodus Travels
8023 Reviews
Currently 02:34 in London MAKE AN ENQUIRY Response Time: 1 hour Response Rate: 100%
Download Trip Notes Enter your email to get a PDF file containing all the trip information for the Search for Snow Leopards with Valerie Parkinson tour.
Trip Notes Sent
We have sent the trip notes for this tour to:

If you book the Search for Snow Leopards with Valerie Parkinson tour within the next 5 days, you can get by applying the following code: