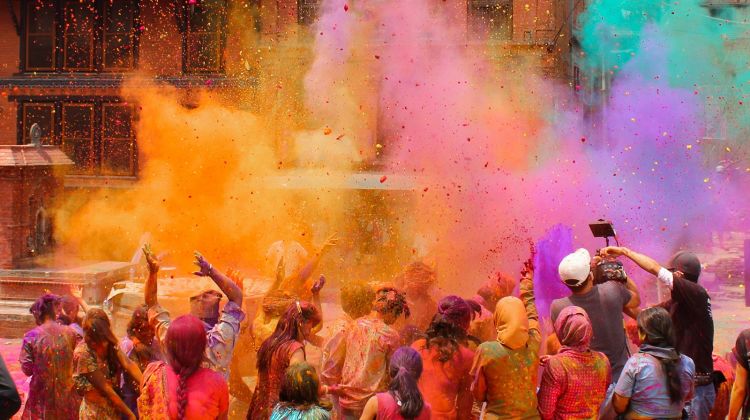 HIGHLIGHTS
This eight-day private, guided tour combines the highlights of India's Golden Triangle with one of India's most famous festivals: Holi, also known as the festival of colors. Start the trip from Delhi, a city that is bound to give you a pleasant surprise with its interesting mix of history, art, culture and architectural wonders from the ancient and the modern world.

Explore Mughal-era architectural wonders, including Unesco World Heritage sites, in Agra. In Rajasthan, admire the magnificent royal palaces of Jaipur. Ride a rickshaw in the streets of Old Delhi and go for an elephant ride in Jaipur.

The highlight of this tour is Holi, India’s popular festival of colours. Be part of an exclusive, private Holi celebration at a heritage property in Jaipur accompanied with a colourful riot of organic colours, Rajasthani music and dance as well as special Holi delicacies. We will drive you back to the airport in Delhi for you flight home after the tour is over.

View More
CUSTOMER REVIEWS ABOUT GETS HOLIDAYS PVT LTD
5 - Excellent
Based on 102 reviews
Raymon's review for another GeTS Holidays PVT LTD tour
4 - Very Good
“We were lucky to be there on the first day of the Diwali festival and this added to the experience, although they doubled the price for this. We then had a Punjabi lunch of a kulcha and chole which was obviously included in the package.
The Wagah Border visit was also fun but we found the nationalistic fervor a little unsettling considering that this is a religious border basically separating Punjabi families. Our guide and driver were excellent. We will strongly recommend Gets Holidays.”
Christine's review for another GeTS Holidays PVT LTD tour
4.5 - Excellent
“GeTS Holidays helped us plan and execute a recent trip to Kerala. We were 2 adults and 3 kids so we needed help to plan our trip and ensure we saw as much as possible, whilst staying in suitable accommodation. The team were also available during our staying and remained in contact in case we needed anything. They provided an excellent driver too.

Had I researched a little harder, I would probably have requested some changes to hotels to be a little more central and to allow us to immerse in local life a little more, but in the main we were happy with our trip.”
Tranmic's review for another GeTS Holidays PVT LTD tour
5 - Excellent
“I booked this tour through Viator looking for the most convenient way to visit Agra from Delhi. We are a family of 9 (ages 9 through 60) from USA who have never been to India before and I was very pleased to have such an accommodating tour. Our private bus picked us up directly from our hotel in Gurgaon on time. The roads in India seem chaotic compared to America but our driver was masterful and made us feel safe throughout the entire journey.

Our tour guide in Agra, Yogi, was excellent. He was extremely friendly and incredibly well-spoken. He was accommodating to all of my family's needs (we are very needy) and was helpful throughout the entire day. He was excellent with our kids (who are very talkative) and kind and pleasant to the older members of my family. His English was perfect!! Though the Taj Mahal and Agra Fort drew considerable crowds, Yogi made sure that my family was comfortable, let us walk at our own pace, took pictures for us and helped us skip what looked like very long lines. Awesome to learn that he was an avid NBA fan! We'll return the favor if he ever visits the USA and we'll go watch basketball.

Before departing Agra, our driver and Yogi took us to a very clean Indian buffet restaurant with great service. In the end, I was astounded how well this tour went. My family is admittedly chaotic and hard to manage so I was slightly nervous how the day would go. Because of the fact that everything from pick-up to drop-off went so seamlessly, all I can do is highly recommend booking a tour with this company. Thanks!!!”
Read more GeTS Holidays PVT LTD reviews
ITINERARY Expand All
WHAT'S INCLUDED WHAT'S EXCLUDED
Why Book with Bookmundi
What are customers saying about Bookmundi
Excellent
4.72 Average 307 Reviews

Other Practical InformationWe can customize your itinerary on the basis of 4 & 5 star category of hotels. Please note that the Taj Mahal remains closed on Fridays
NEED HELP OR HAVE A QUESTION ABOUT THIS TOUR?
If you have any question about this tour or need help with planning a trip, please do not hesitate to get in touch with us. We're ready to help.
Ask a question
days 08 From US$ 0 See Group Discount
Sorry, this product is currently not available.
Response Time: 3 hours Response Rate: 100% MAKE AN ENQUIRY