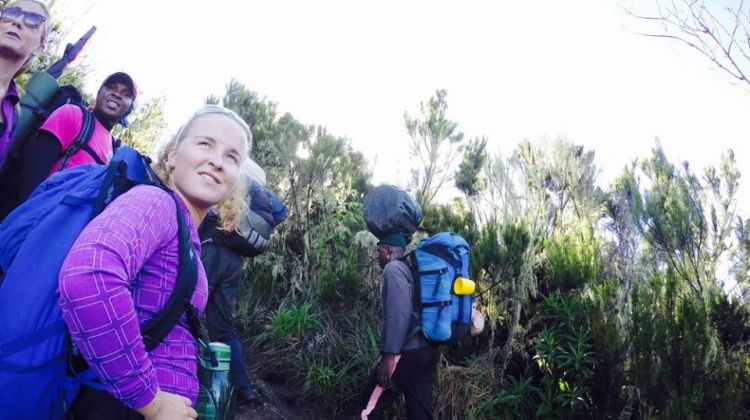 HIGHLIGHTS
Also known as the “Whiskey” route, the Machame route is now the most popular ascent route on Mt Kilimanjaro. Compared with the Marangu route, the walking days on the Machame route are longer and the walks are steeper. However, the scenery is spectacular and landscape interesting. The Machame route is considered a difficult route, and is better suited for more adventurous trekkers and those with some hiking or backpacking experience.

The Machame route is scenically beautiful and varied. However, due to its popularity there are increased numbers of trekkers, it loses some of its splendour. The Machame route approaches the summit from the southwest and descends using the Mweka route, rewarding climbers with views of the expansive Shira Plateau, an optional scramble up Lava Tower, a climb up the Great Barranco wall, and a traverse underneath Kilimanjaro’s southern ice field.

Climbers sleep in supplied tents at designated campsites, and eat meals either outdoors or inside a large dining tent, depending on weather conditions. Bless Africa Tours staff will prepare all meals and set up and take down the tents.

The Machame route is a highly successful route to the summit as you climb high and sleep lower because of position of the campsites, which aids acclimatization. It also offers the opportunity to take an alternative route to the summit, either via Barafu camp or the less frequented and more difficult Western breach route. The minimum number of days required for this route is six days, although seven days is recommended to make the walk more enjoyable and improve acclimatization.

After arrival in Moshi and the hotel, there will be the opportunity to rest. Later there will be a meeting with the tour guide for a briefing about the trek and Mt Kilimanjaro and, very importantly, an equipment check.
View More
ITINERARY
Alt. in: ALTITUDE MAP
Expand All
WHAT'S INCLUDED WHAT'S EXCLUDED
Why Book with Bookmundi
What are customers saying about Bookmundi
Excellent
4.68 Average 348 Reviews

NEED HELP OR HAVE A QUESTION ABOUT THIS TOUR?
If you have any question about this tour or need help with planning a trip, please do not hesitate to get in touch with us. We're ready to help.
Get help
days 07 From US$ 1,900 See Group Discount
CHECK AVAILABILITY
Response Time: 3 hours Response Rate: 100% MAKE AN ENQUIRY