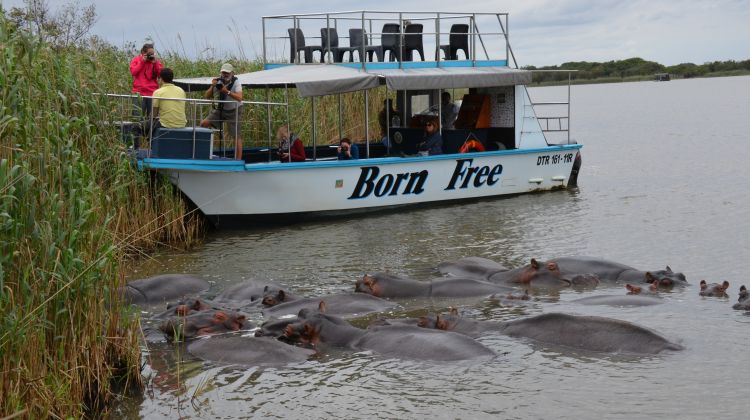 HIGHLIGHTS
The tour departs from Durban, heading north along the coast to northern KwaZulu-Natal. The first stop is the town of St Lucia and the estuary inside the iSimangaliso Wetlands Park. There you will board a riverboat for a 2-hour guided tour of the estuary. The local guide will inform you of the reserve's history and its incredible wildlife.

After lunch, you will continue with your safari before leaving the park on route to Emdoneni Wild Cat Sanctuary. During the guided tour to the cat project, visitors can get up close and personal with some of South Africa's endangered cat species; caracal, serval, cheetah and the African wildcat. This once in a lifetime opportunity can be enjoyed whilst being educated on a tour. This activity is very popular!

After the tour we start the two hours journey back to Durban for drop off.

Previously known as the Greater St. Lucia Wetland Park, iSimangaliso Wetlands Park was declared South Africa's first Natural World Heritage Site (UNESCO) and is considered South Africa's third largest park with 280km of near pristine coastline and 328 000 hectares of magnificent scenery. The protected area is home to one of the largest population of hippopotami in SA, an estimated 1000 crocodiles as well as a wealth of plant, bird and animal life. The park was proclaimed a world heritage site because of the rich biodiversity, unique ecosystems and natural beauty occurring in a relatively small area. Animals occurring in the park include lion, African elephant, leopard, black and southern white rhino, buffalo and in the ocean, whales, dolphins, and marine turtles including the leatherback and loggerhead turtle.

Emdoneni Cat Project offers a guided tour of South Africa's endangered wild cat species. The aim of the Emdoneni Cat Project is to care for cheetahs, serval cats, African wildcats and caracal (lynx), which have been orphaned or injured in the wild and need care and rehabilitation.
View More
WHAT'S INCLUDED WHAT'S EXCLUDED
Why Book with Bookmundi
What are customers saying about Bookmundi
Excellent
4.68 Average 345 Reviews

Other Practical InformationDeparture/return location: pickup & drop off service within a 5km radius of Durban. Departure time: 06:30 am Return time: 07:00 pm Wear: comfortable clothing and shoes, hat, sunscreen, jacket. Age: all ages welcome Dates: all year round Traveller type: single or per person sharing * German and Polish languages can be requested (on request)
NEED HELP OR HAVE A QUESTION ABOUT THIS TOUR?
If you have any question about this tour or need help with planning a trip, please do not hesitate to get in touch with us. We're ready to help.
Get help
hours 12 From US$ 180 See Group Discount
CHECK AVAILABILITY
Response Time: 3 hours Response Rate: 100% MAKE AN ENQUIRY