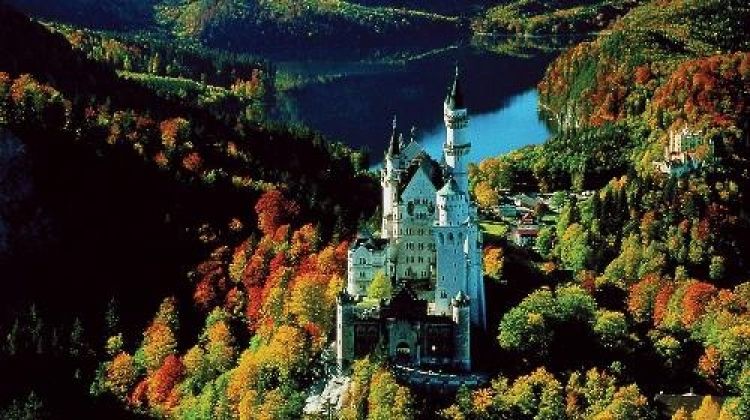 Walk in the footsteps of Bavaria's eccentric King Ludwig to Neuschwanstein Castle. Also known as the Koenig Ludwig Weg or King Ludwig’s Way. The eccentric Ludwig II succeeded to the throne of the then independent kingdom of Bavaria in 1864, as a youth of 18. On 13 June 1886 he and his physician Dr Godden were found dead in the water of the Starnbergersee (Lake Starnberg); the question still remains - Did Ludwig fall or was he pushed? He was a strong swimmer and a post-mortem established that he did not drown. But no one has succeeded in unraveling the mystery. The Koenig Ludwig Weg starts at the Votivkapelle (shrine), which marks the actual spot on the lakeshore ( near the hamlet of Berg) where the bodies were found. The route ends 60 miles away near Ludwig's own fairy tale castle at Neuschwanstein. This walk, which is one of the favourite longer walks in Germany, links places particularly dear to King Ludwig who was himself a keen walker. It is not a mountain walk and much of the route is on farm tracks and country lanes, but the surroundings are delightful, with a host of splendid buildings to admire in magnificent settings and plentiful opportunities to stop for refreshments! The plains surrounding Munich give way to gentle rolling hills that become ever higher as one approaches the great wall of limestone that marks the start of the Alps proper. The route passes two of Bavaria's most scenic lakes and through charming villages of geranium bedecked chalets with typical onion shaped church spires. There are masterpieces of baroque architecture, the Andechs monastery, the wonderful cathedral of Diessen on the Ammersee Lake; the monasteries of Wessobrunn and Rottenbuch, as well as the Wies or 'Meadow' church are on the route. The highest point (988m) on the walk is the summit of Hohenpeissenberg hill, considered by many to be the finest viewpoint in Bavaria. We end our tour at King Ludwig II’s most famous architectural masterpiece- the castle Neuschwanstein and at the nearby castle Hohenschwangau, both in Allgau on the Austrian border, where Ludwig spent most of his childhood. To celebrate the 150th anniversary of King Ludwig II (in 1995), the route was extended to begin at the Votivkapelle in Berg. It is a popular walk so early booking is recommended.
View More
CUSTOMER REVIEWS
5 - Excellent
Based on 4 reviews
A
5 - Excellent
Excellent
“A great walking trip - very well organised. Maps and direction notes were very clear and easy to follow. Accommodation first class. The scenery in Bavaria is amazing!”
A
5 - Excellent
Excellent
“Amazing walk through lush green country side interspersed with tidy, white, manicured villages amidst cooling forests with the emerging majestic Bavarian Alps.”
A
5 - Excellent
Excellent
“Lovely walk, enjoyed the variety of including the ferry rides on the lakes. Enjoyed the scenery, the food and beer excellent.”
A
5 - Excellent
Excellent
“The route instructions were excellent. An excellent trip and walk. Thoroughly enjoyable with good accommodation, food and scenery. All accommodation and arrangements worked perfectly - no problems at all.”
ITINERARY Expand All
WHAT'S INCLUDED
Accommodation
Meals
Transport
Others
WHAT'S EXCLUDED
Monthly Price Comparision
Why Book with Bookmundi
What are customers saying about Bookmundi
Excellent
4.68 Average 345 Reviews

No additional cancellation fees apply for this Bavaria: King Ludwig's Way tour. You can cancel the tour up to 70 days prior departure and avoid paying the full amount, but your deposit paid is non-refundable. No refund applies for cancellations within 69 days of departure.

For this Bavaria: King Ludwig's Way tour getting the required visa(s) is the responsibility for each individual traveller, as visa requirements vary depending on your nationality. We recommend to check with your local embassies representing the countries that you are travelling to, as part of this itinerary.

NEED HELP OR HAVE A QUESTION ABOUT THIS TOUR?
If you have any question about this tour or need help with planning a trip, please do not hesitate to get in touch with us. We're ready to help.
Get help
days 08 From US$ 1,074
CHECK AVAILABILITY
Response Time: 3 hours Response Rate: 100% MAKE AN ENQUIRY

Tour is operated by : Sherpa Expeditions
199 Reviews
Currently 00:59 in London MAKE AN ENQUIRY Response Time: 3 hours Response Rate: 100%
Download Trip Notes Enter your email to get a PDF file containing all the trip information for the Bavaria: King Ludwig's Way tour.
Trip Notes Sent
We have sent the trip notes for this tour to:

If you book the Bavaria: King Ludwig's Way tour within the next 5 days, you can get by applying the following code: