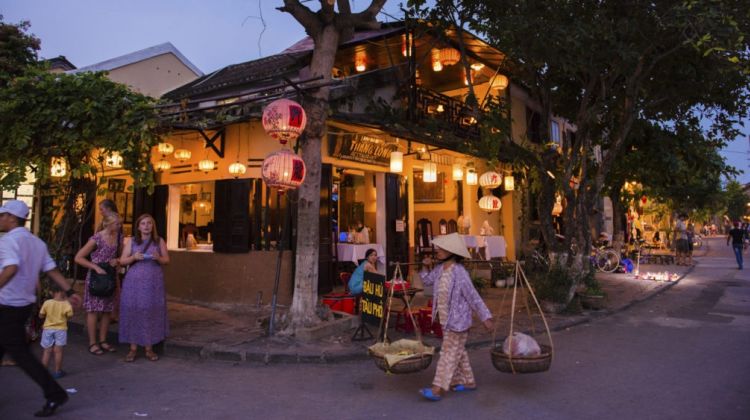 HIGHLIGHTS
Enjoy 13 memorable days in Vietnam. Travel the country from north to south, visiting places ranging from the beautiful city of Hoi An, known for its narrow alleys, to the majestic Ha Long Bay, famous for its more than 3,000 limestone peaks, or karsts, that jut from the deep blue water of the bay.

Take a full-day tour of Hanoi, visit its most famous landmarks, including the mausoleum of the nation’s founder Ho Chi Minh (closed on Mondays and Fridays), the Presidential Palace, Ho Chi Minh’s house, the One Pillar Pagoda and the Temple of Literature.

Travel to the Ha Long Bay next. The bay covers 577 square miles and is filled with more than 3,000 limestone peaks (karsts) that jut from the deep blue water as far as the eye can see. Visit the imperial city of Hue, which used to be Vietnam’s political capital from 1802 to 1945 under the 13 emperors of the Nguyen dynasty, and My Son Sanctuary, a World Heritage site 50 km southwest of Hoi An, which has the remains of Hindu temples constructed between between the 4th and the 14th century AD. Located in a lush, fertile valley, My Son was the capital and religious center of the Cham people.

Go on a traditional boat ride on the Halong Bay. Ride a bicycle through Hanoi's Old Quarter. Enjoy your stay in excellent hotels throughout the trip. An English-speaking guide will accompany you during your excursions. All entrance fees to the major destinations are included in the tour price so that you can have a nice time without any hassle of buying tickets.
View More
CUSTOMER REVIEWS
5 - Excellent
Based on 5 reviews
Unforgettable 15 days
5 - Excellent
“Initially we were wary of using an agency we didn't know. However, Phuong and her team exceeded our wildest expectations.


Throughout the planning phase we were provided with accurate and helpful information. Together we decided on cities, domestic transport, hotels & activities. Phuong efficiently handled everything - and her recommendations were excellent. Our 15 day trip took us to Hoi An, Hue and Hanoi - incl. an overnight excursion to Ha Long bay. All hotels were fantastic, selected on their location or facilities, depending on whether we were relaxing or sight-seeing. We were even upgraded in Hanoi.


We were in good hands throughout the trip. Vinh and Son were excellent guides. Particularly Vinh's knowledge of the area impressed us. It was luxurious and extremely pleasing to be looked after so well.”
First time to Vietnam
5 - Excellent
“We came as a mother and daughter duo and everything went very smoothly! We didn't have to worry about transportation or hotels. I'd certainly recommend if it's your first time to the country. Halong Bay and the Cu Chi tunnels were the highlights of our trip and are a must.”
Perfect trip
5 - Excellent
“Our trip to Vietnam was perfect thanks to Legend travel Group. Everything was well arananged and the first day when we arrived we received al the information. Besides we Always can contact our guide from Legend Travel Group in times of trouble or with any question.”
Our trip to Vietnam: thanks!
5 - Excellent
“Very well organized trip from Hanoi to Saigon. Quick and solid response to our questions. Recommended! Thanks to Danny.”
Read more reviews
ITINERARY Expand All
WHAT'S INCLUDED OPTIONAL ADDONS (Available during check-out) WHAT'S EXCLUDED
Why Book with Bookmundi
What are customers saying about Bookmundi
Excellent
4.71 Average 329 Reviews

NEED HELP OR HAVE A QUESTION ABOUT THIS TOUR?
If you have any question about this tour or need help with planning a trip, please do not hesitate to get in touch with us. We're ready to help.
Get help
days 13 From US$ 745
CHECK AVAILABILITY
Response Time: 2 hours Response Rate: 100% MAKE AN ENQUIRY