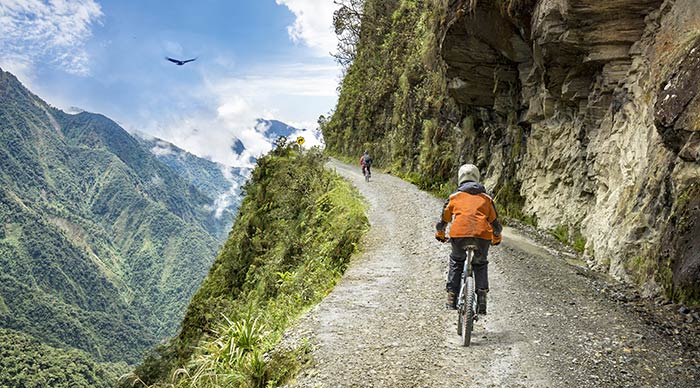 Want to go to the perfect place to enjoy exciting adventures? Looking for varied landscapes so that you can partake in all the different kinds of adventure that each landscape has to offer? Then head on over to the continent of South America.

With everything from tropical rain-forests, arid deserts, high mountains and endless plains, South America has it all. Here is our pick of the top 8 amazing adventures in South America.

Travel on the Death Road, Bolivia (above image)

The Death Road is a 41-mile stretch of gravel-covered dirt track that connects the capital city of La Paz to Coroico, a city northeast of La Paz. The infamous route is estimated to claim the lives of around 200 people a year, a figure that led to its ominous name and the designation as the most dangerous road in the world.

Even though the road is accessible by cars, buses and lorries, the road has only recently gained popularity among thrill-seeking tourists. Mountain biking and backpacking hikes are the most popular activities along this deadly road. The route incorporates a nearly 12,000-foot descent complete with tight, hairpin bends almost all without the safety of guard rails. This is the ultimate in fate-tempting adventure.

Patagonia is the southernmost portion of South America and extends all the way to the tip of the continent—encompassing Tierra del Fuego and the many smaller islands up to Cape Horn. The western quarter of Patagonia lies in Chile and the rest is in Argentina. Patagonia is an immense region with an area of about 400,000 square miles.

An amazing trekking journey in South America lies in Patagonia. Patagonia treks extend through Argentina and Chile and introduce travelers to one of the wildest places on the planet. This is where you’ll find iced-over rivers, towering mountain ranges, and unbelievable landscapes. Popular trip excursions include exploring the Beagle Channel by boat, bird watching and whale watching on the way to Estancia Haberton. There are also options for kayaking, canoeing, boating and hiking. You can also go horseback riding through El Calafate and the Torres del Paine National Park.

Machu Picchu is the most visible example of Inca civilization that has survived to the present times. Their creative genius can be found in their monumental construction projects in the form of roads, agricultural terraces, and administrative and ceremonial structures.

One of the most iconic South American adventure trips is hiking the Inca Trail to Machu Picchu. This is however not an easy hike to do. The trail is about 27 miles long and goes through mountain passes, ancient ruins, and dense forests to reach the main ruins at the end of the trek. The mountain scenery is breathtaking as you witness the mesmerizing Andes rise up to touch the sky.

There are several different routes one can take to get to Machu Picchu. The Inca were master road builders who created miles after miles of trails throughout the difficult and mountainous terrain of the Andes. Hikers today can utilize these alternate routes to Machu Picchu to meet their particular fitness levels.

Ecuador is most famous for the Galapagos islands but that is not the only thing this diverse country has to offer to the adventurer. Ecuador is a mountainous country with the Andes crossing Ecuador from north to south. Here in the Andes lie the “Avenue of the Volcanoes”, with 8 of the 10 highest peaks in Ecuador.

Climbs can be done year round and there are several volcanoes to choose from. Visitors are rewarded with a vast and impressive scenery unlike any other on earth. However, most of these climbs require some experience in mountaineering and proper gear is required. Some of the most popular volcanoes include the technical El Altar, the difficult Antisana, the easy Cayambe and the popular Cotopaxi. Climbers also have the option to summit Chimborazo (6268m) which is the highest point in Ecuador and is also the farthest point from the center of the Earth.

Argentina has some of the world’s best whitewater rafting and you can do it in several rivers in the country. The rivers offer rafting from Class II to Class IV but there are no Class V or VI rapids. Almost all the rivers are the result of meltwater of the Andes flowing dramatically to the seas and lakes.

Some Argentine rivers renowned for whitewater rafting include Alumine, Atuel, Corcovado, Hua-Hum, Juramento and Manso. However, the most popular of them all is the wild Mendoza river with its Class III and IV rapids. The wild river adventure here can be enjoyed throughout the year. Even though it gets a little chilly during the during the winter months, the waters become calmer, making for a relaxing rafting trip.

Snorkeling in the Galápagos, Ecuador

The Galápagos Islands have been well known around the world ever since Charles Darwin disembarked here from H. M. S. Beagle as the ship’s naturalist. It has one of the most astounding bio-diversity in the world despite being a small island. Darwin made his monumental discovery of the Theory of Evolution right here.

But the island promises more than just historical facts. Snorkeling in the Galápagos has become very popular lately and it is easy to understand why: the warm weather, crystal clear waters and, above all, the sheer variety of marine life that can be seen on every dive. Some animals you might expect to see during the snorkeling include white-tip reef shark, sea lion, Galapagos penguin, marine iguana, flightless cormorant, star fish, sea turtle, and dozens of species of colorful tropical fish.

Trek to the Lost City, Colombia

The Lost City or Ciudad Perdida is located on the slopes of the Sierra Nevada de Santa Marta mountain range near Colombia’s northern coast. The city dates back to 9th century AD and was once home to as many as four thousand Tayrona Indians. The ruins are as impressive as they are remote, containing about 170 stone terraces that were once the foundations for Tayrona houses, markets, and ritual sites.

Though the ruins themselves are impressive, getting there is half the fun. Often steep and tiring, this is a beautiful trek through thick jungles, steep hills and splendid river valleys of the Sierra Nevada Mountains. The trail along the 46 kilometers round-trip is often muddy but more than makes up for it with several river crossings with lots of places to go for a refreshing swim. Although this is a challenging trek, most people with decent fitness levels can do it without much trouble.

A tour of the Amazon Rainforest is an almost surreal journey into the heart of the largest rainforest on earth. Amazon is the most bio-diverse place on the planet with hundreds of species of plants, mammals, reptiles, birds and amphibians, not to mention the millions of different kinds of invertebrates.

Whether you want a serene and luxurious adventure or want to experience the raw power of the jungle, there are options for everyone. Activities include jungle camping, canoeing and kayaking on lakes, Amazon river cruises, piranha fishing, bird watching, hiking through the lush rainforest looking for native wildlife and medicinal plants, or visiting Shamans – the traditional healers of South America.

Regardless of your tastes or abilities, the Amazon offers everyone a chance to experience this incredible wonder of nature. You even have a choice of the country where would want to start or end your Amazon adventure as the rainforest is bordered by no less than eight countries: Brazil, Bolivia, Colombia, Ecuador, Guyana, Peru, Suriname and Venezuela.

Whether you are looking for a dangerous ride through the Death Road in Bolivia, thrilling rafting adventure in a Class IV river in Argentina or a relatively safe snorkeling dive in the Galapagos, you are bound to find the adventures in South America to be thoroughly entertaining and magical.

Stay safe and enjoy your adventures!!