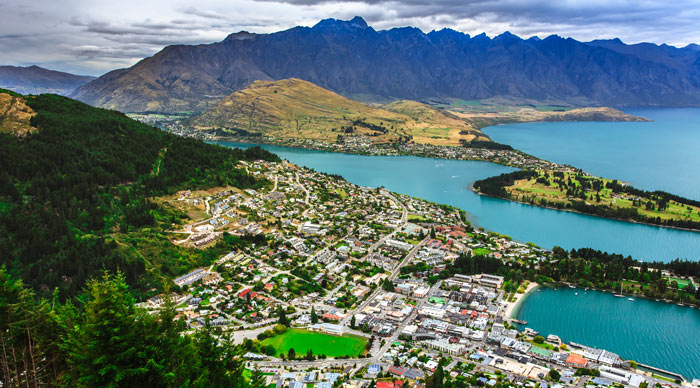 New Zealand is full of things to see and do. While its sights and attractions cover a large part of your itineraries, you must reserve some time for the countless adventures and adrenaline pumping activities that the country has on offer.

From dramatic bridge climbs to magnificent landscapes, New Zealand has all kinds of things that are apt for the adventurer in you. And there are always those hot pools, beaches, vineyards and cultural experiences to fall back upon after one of the top adventures of your life. Bookmundi presents the top things to do in New Zealand.

Visitors travel to Queenstown for some of the best skiing adventures in the most breathtaking locales of New Zealand. This picturesque alpine town is located at the edge of Lake Wakatipu and it boasts of a lively atmosphere and mind-boggling year-round beauty. Queenstown feels so special because it combines a small-town vibe with remarkable skiing adventures and big-city thrills. The dining scene is particularly special in the city with restaurants like The Bunker, The Cow, Fergburger and Wai entertaining all kinds of tastes and preferences. Queenstown is also located within close proximity of Arrowtown, a former gold rush site that still enjoys heritage status.

Rudyard Kipling had termed Milford Sound as the Eighth Wonder of the World, and rightly so. Milford Sound is located in the Fiordland National Park and is famous as the top adventure destination of New Zealand. It presents a number of wide interior bays that are framed by lush green rainforests, waterfalls and rock faces which rise to heights of more than 1200 meters. Visitors also get to treat their eyes to occasional sightings of dolphins, penguins and seals through an underwater observatory and scenic cruises.

Popularly known as the Barrier, the Great Barrier Island is the fourth largest island in New Zealand. It presents a mountainous, rugged landmass and is the last stop before the Hauraki Gulf opens out to the Pacific Ocean. Located at a distance of 90kms from downtown Auckland, the island is particularly famous for its breathtaking beaches that are known for their wild surfing or for their stunning beauty. Accommodation at the island can be found in one of the many baches – traditional New Zealand cabins – which can be as basic as a one-bedroom cabin in the mountains or as rich as a luxe beach house.

Adventure lovers cannot miss out on abseiling 37 meters into a hole that is small enough to let you touch the edge with your feet. The Ruakuri Cave presents a 5-hour underground Black Abyss tour that lets you explore a world that was hidden beneath the sea around 30 million years ago. You’ll tube, zip-wire, wade, leap and squeeze through ice-cold water during this adventure and stop along the way to capture the breathtaking sight of glow-worms in your memories.

Tongariro, the first national park of New Zealand, is a world heritage site that presents three dramatic peaks – Ngauruhoe, Tongariro and Ruapeha. The Tongariro Alpine Crossing, a natural hotspot for hikers and the most famous track in the national park, passes through majestic volcanic terrains, with much of the area still being active. The track requires a 6-to-8 hour trek as it passes through lava flows, steam vents, emerald lakes and active craters. The ski town of Ohakune acts as a base for snowboarders and skiers. It is located on Ruapehu’s southwestern slopes.

Travelers often head down the east coast of South Island to the Hanmer Springs spa village and the stunning Southern Alps. However, most tend to ignore the less-traveled Maruia Springs, a beautiful resort set amidst thermal mineral pools in a picture-perfect setting. The pools come in all shapes and sizes and boast of stunning mountain backdrops. The area also has private spas that present dramatic views of the river and the mountains beyond. Other highlights include Japanese Shiatsu massage, reflexology, private spas, three-course dinners, swimming pools and a complete lack of cellphone coverage. Bookmundi recommends you to try out the bathhouse for an authentic Japanese experience.

River Valley presents one of the most frantic rivers in the country for the best white-water rafting experience in New Zealand. Full of broken water, powerful rapids and large drops, this Grade-5 adventure is everything you need to get your adrenaline pumping. River Valley is home to 10 Grade 4 and Grade 5 foamy rapids and is an activity that is specifically designed for the brave-hearted. Bookmundi also recommends adventurers to jump from a designated cliff edge for a one-of-a-kind experience.

The Franz Josef Glacier is a 12-km long glacier located in the Westland Tai Poutini National Park. Its Maori name refers to a mountain climbing adventurer whose lover was swept away by an avalanche, leaving her heartbroken. It is famous as one of the fastest flowing glaciers in the world with a flow rate that is 10 times more than other glaciers. It is also unique in the sense that it runs all the way from the majestic peaks of the Southern Alps to a rainforest located 300m above sea level. The best way to explore the glacier is via a helicopter. It drops you at the first or second icefall for a guided walk through daily changing ice tunnels and glacial landscapes.

Located at a distance of three hours from Auckland, Rotorua is the primary geothermal area in the country. It boasts of all kinds of geysers and hot springs and presents a wide range of Maori attractions. Bookmundi recommends you to spend a couple of hours at the Wai-O-Tapu hot springs to inhale the sulphur-rich air and watch all kinds of bubbling mud and thermal pools in action.

Milford Sound is an obvious attraction in New Zealand, but the 53-km Milford Track is considered to be one of the greatest walks on the planet. The Milford Track presents a series of hiking tracks that have been particularly designed to allow visitors to see the best and most inaccessible areas in the country. It starts at the head of Lake Te Anau, which can be reached by climbing the Dore Pass or by ferry and ends at Sandfly Point, which can only be reached by sea.

Manu Bay, home to the longest left-hand break in the world, was made immortal in the 1966 classic Endless Summer and its popularity hasn’t dwindled ever since. Located in the surf town of Raglan, Manu Bay attracts surfers from all over the planet as a decent wave here can carry surfers for up to 2 kms. The town itself is very surfer-friendly and laid-back and the restaurants here can always whip up a hearty fare.

Jetboating on the Buller Gorge is one adventure that you simply have to experience while in New Zealand. This twin V8 engine, 820 hp powered adventure takes you closer to craggy overhangs and rock walls at terrifying speeds over crystal-clear water. You are also offered great insights into the geological and historic features of Buller Gorge during your jetboating adventure. Bookmundi recommends you to watch out for the 360-degree Hamilton spins that will leave you unsure of where you’re heading and where you began your adventure.

The Kiwis have made it possible for you to fly, hike, roll, dive, jump or slide through almost each and every part of the country, making New Zealand a wonderland for adventure seekers. This list of the top things to do in New Zealand is sure to get your blood racing.