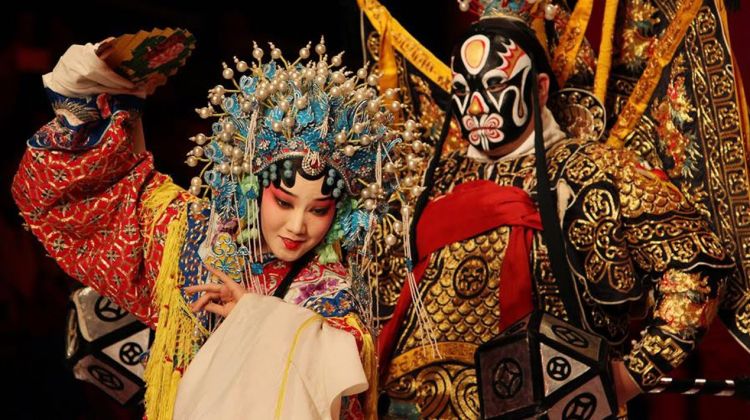 HIGHLIGHTS
The Beijing guide and driver will be holding a sign with your name written on it and pick you up from your hotel lobby at 18:20. Drive to the theater directly. Peking opera has more than 230 years of history. It is believed that Peking opera gradually came into being after 1790 when the famous four Anhui Opera Troupes came to Beijing. Peking opera developed quickly during the reign of Emperor Qianlong and the Empress Dowager Cixi under their imperial patronage, eventually becoming more common to the common people.

In ancient times, the costumes were a garish collection of sharply contrasting colors to stand out on the dimly illuminated stage only lit by oil lamps. Peking opera is a harmonious combination of the Grand Opera, ballet and acrobatics consisting of dance, martial arts and mime.

The Peking opera band mainly consists of an orchestra and percussion band. The former frequently accompanies peaceful scenes while the latter provides the right atmosphere for battle scenes. The commonly used percussion instruments include castanets, drums, bells and cymbals. One person usually plays the castanets and drums simultaneously, which conducts the entire band.

The orchestral instruments include the Erhu, Huqin, Yueqin, Sheng (reed pipe), Pipa (lute) and other instruments. The band usually sits on the left side of the stage. Afterwards, your Chinese driver will take you back to your hotel.
View More
WHAT'S INCLUDED WHAT'S EXCLUDED
Why Book with Bookmundi
What are customers saying about Bookmundi
Excellent
4.68 Average 345 Reviews

NEED HELP OR HAVE A QUESTION ABOUT THIS TOUR?
If you have any question about this tour or need help with planning a trip, please do not hesitate to get in touch with us. We're ready to help.
Get help
hours 04 From US$ 92 See Group Discount
CHECK AVAILABILITY
Response Time: 3 hours Response Rate: 100% MAKE AN ENQUIRY