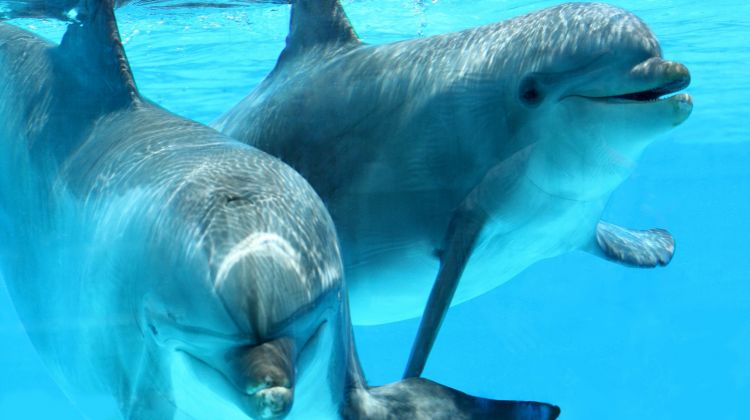 HIGHLIGHTS
Join us on the spectacular tour to the most popular dolphin spotting location in Zanzibar –Kizimkazi village, located on the Southern coast of Zanzibar Island, where you can see both bottle-nose and humpback dolphins.

The shallow coastal waters around Kizimkazi are a favorite hangout for dolphins as they come here for the reliable food supply, to nurse their calves, rest and socialize. There are also rather shyer humpback dolphins that sometimes put in an appearance here, although their schedule is a little more erratic.

The dolphin tour is best very early in the morning because in the afternoon as the sun rises, the sea water tends to become warm and the dolphins dive deep down to escape the heat. For guests who are staying in a Stone town hotel, we’ll pick you up from your hotel at 6:30am. It is also possible to do the trip later in the afternoon, but the probability of seeing dolphins is smaller.

The dolphin trip lasts two to three hours. Although dolphin-spotting is a popular activity, sightings aren’t guaranteed 100% and sometimes spottings require time and patience as the animals are in their natural environment.

Kizimkazi is also the site of a 12th-century mosque, the earliest evidence of Islam in East Africa, and is thus worth a visit for both cultural and historical reasons.

The dolphin trip can be combined with Jozani Forest, as the forest is on the way to Kizimkazi; we pass through the forest on the way back from dolphin tour.
View More
CUSTOMER REVIEWS
4.5 - Excellent
Based on 2 reviews
J
4 - Very Good
Very Good
“Very Good”
J
5 - Excellent
Excellent
“Excellent”
WHAT'S INCLUDED WHAT'S EXCLUDED
Why Book with Bookmundi
What are customers saying about Bookmundi
Excellent
4.69 Average 363 Reviews

Other Practical InformationA deposit of 10% is required when booking this tour. The remaining balance will be charged 45 days prior departure. For any bookings within 45 days of departure, the full tour amount will be charged upon booking We advise clients to wear or bring their swimming costumes. We also advise wearing waterproof sandals for boarding the dhows and to bring sunscreen.
NEED HELP OR HAVE A QUESTION ABOUT THIS TOUR?
If you have any question about this tour or need help with planning a trip, please do not hesitate to get in touch with us. We're ready to help.
Get help
hours 03 From US$ 45
CHECK AVAILABILITY
Response Time: 1 hour Response Rate: 100% MAKE AN ENQUIRY