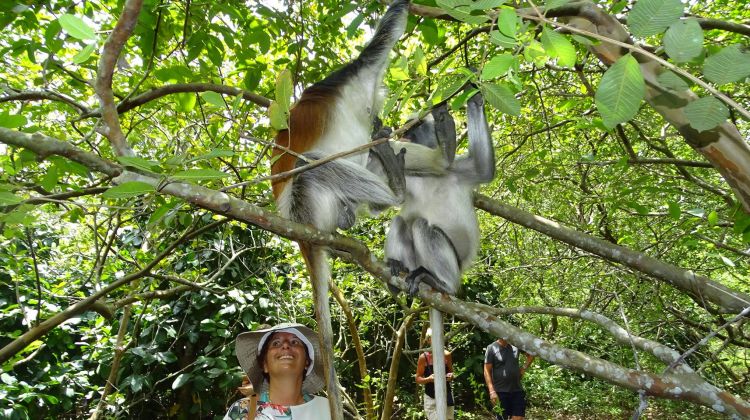 HIGHLIGHTS
Visit the Jozani forest and explore this natural part of Zanzibar, home to several habitats including swamp forest, evergreen thickets, mangroves, as well as a variety of wildlife, including sykes and red colobus monkeys, bush pigs, Ader’s duiker and suni antelopes, elephant shrews, chameleons and lots of birdlife.

The Jozani forest is best known for its kirks red colobus monkeys (kima punju in swahili), which are endemic to Zanzibar. About 10 years ago, the monkeys were considered to be in danger of extinction, but this trend has since reversed due to the conservation project. There are about 6000 red colobus monkeys now residing in Jozani Forest.

After visiting the monkeys, walk across to the Pete-Jozani mangrove boardwalk, which entwines through coral thicket vegetation, mangrove forests and across a creek. The mangrove forest is extremely crucial to Zanzibar’s ecosystems, providing a habitat for many lizards, snakes and birdlife as well as preventing the coastal erosion.

Jozani Forest is situated 38km southeast of Stone Town. In 1995, the Jozani Chwaka Bay Conservation Project was set up to protect the largest remaining patch of indigenous ground-water forest that used to cover Zanzibar. Local communities are involved in the project and some of your entrance fee contributes to development projects and to compensate local farmers whose crops are often damaged by the red colobus monkeys.

Other Practical InformationA deposit of 10% is required when booking this tour. The remaining balance will be charged 45 days prior departure. For any bookings within 45 days of departure, the full tour amount will be charged upon booking.
NEED HELP OR HAVE A QUESTION ABOUT THIS TOUR?
If you have any question about this tour or need help with planning a trip, please do not hesitate to get in touch with us. We're ready to help.
Get help
hours 03 From US$ 40
CHECK AVAILABILITY
Response Time: 1 hour Response Rate: 100% MAKE AN ENQUIRY