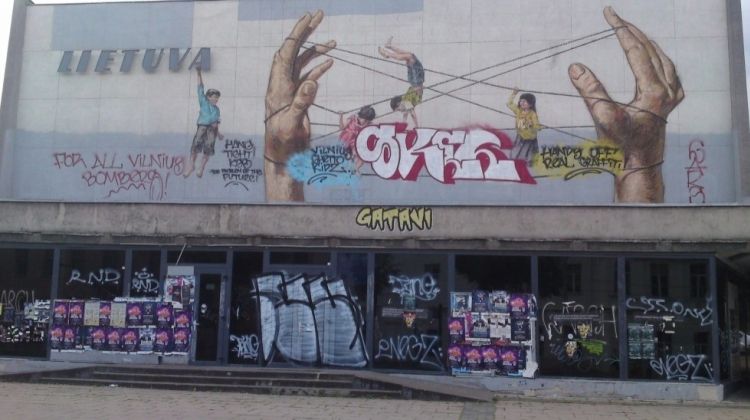 Get a look at life behind the Iron Curtain on this private Vilnius time travelling tour that digs deep into the city’s Soviet past. Learn about ‘homo sovieticus’ and all the incredible and funny stories that shouldn’t be forgotten. Visit a local market, taste Soviet-era dishes, see the Soviet blocks that still stand, find out what life was like for the “happiest people in the world,” and learn why the entire Soviet empire collapsed.


Experience the best travel stories for yourself. Join a local expert and uncover hidden gems on this city adventure hand-picked by the world's leading travel publisher. Lonely Planet Experiences powered by Urban Adventures bring stories to life in the best-loved cities around the globe.
View More

CUSTOMER REVIEWS ABOUT URBAN ADVENTURES
5 - Excellent
Based on 802 reviews
Ms. Clare's review for another Urban Adventures tour
4.5 - Excellent
“The tour in San Jose was wonderful. We saw much of the city and enjoyed a wonderful meal. Meeting Gerardo Montoya was also very special and we will never forget our experience. Thank you!”
Mr. Robert's review for another Urban Adventures tour
5 - Excellent
“Our guide welcomed us as we approached him, after introductions he explained how the day would be spent and checked that we were comfortable in what we were wearing. That we had fluid as it was likely to be a very warm day. Ample time for photographs, questions, soaking up the environment and time to absorb the history. We had a thoroughly fun filled day, the variety of the walk, boat trip, lunch, tram ride all added to the day. By the end of the day the guide felt more of a friend.”
Ms. Jan's review for another Urban Adventures tour
5 - Excellent
“What a great tour! Ines was brilliant and enthusiastic and great fun. We got to try all kinds of things in all kinds of interesting bars. Loved it.”
Read more Urban Adventures reviews
ITINERARY

Exploring the Soviet past in Vilnius means diving into its quirks and absurdities, the funny and sad stories, and the harsh realities about life in ‘the best country in the world.’ On this private Vilnius tour, you’ll learn about Stalin’s horrors, as well as the struggles, resistance, and drive for freedom that destroyed the Soviet empire.

For 50 years, Lithuania was a Soviet republic and this period left many visible marks. This is a country where partisan war lasted for nine years, where almost every family has someone who perished in Gulags, where unarmed people protected their country from Soviet tanks, and where the collapse of the Soviet Union began.

We’ll meet for our Vilnius walking tour at the Town Hall, then walk toward the Jewish quarter and visit the local market, where not many things have changed, except the prices. Here we will try a Lithuanian specialty: salted and smoked bacon and “black bread,” which helped people to survive through both good and bad times. Then we’ll walk toward the former railway workers’ union house — a unique place that’s now converted into a nightclub and skating park, and decorated with modern art. You’ll learn why workers needed a palace and why some factories had no address, only a mailbox.

Next, we’ll head to the Soviet block apartment district. We’ll talk about what life was like in those apartments and what it felt like to be a citizen during that era. What was it like to live in the "best country in the world"? We’ll discuss all the details and rituals of daily life, like what locals ate for breakfast, and find out why good friends were more important than money. Your guide will even throw in a few jokes from Soviet times — the same jokes that used to once risk sending you to prison.

Next up on your private Vilnius tour, it’s time to explore cuisine à la Soviet! Find out why kitchens in Soviet blocks were limited to nine square metres in size, and why canned green peas and mayonnaise were top products at that time. We’ll then pop into a Soviet-inspired restaurant to taste very special ‘delicacies’ from Soviet times. Don’t be afraid — they’re actually surprisingly tasty! We’re talking about deep-fried pastry with minced meat and onion filling, which would only be prepared for special occasions. We’ll also try some Lithuanian soup, because Lithuanians can’t imagine lunch without it! And a glass of beer too, of course.

We’ll then do as the locals do and hop aboard public transit to the wedding palace, where we’ll tell you all about wedding traditions from Soviet times. Find out why only civil registration could guarantee the happiness of your marriage, how taxi drivers created new wedding traditions, and why there was no sex in the Soviet Union! We’ll also walk to a trade unions’ palace, built on a cemetery, where there are other Soviet secrets to share. We’ll hear about the importance of connections and the meaning of a Soviet saying, “It is better to have 100 friends than 100 rubles.”

From here, we’ll take in the sweeping view — including spying the legendary TV tower and the most popular pub in Soviet Lithuania. It is said that beer flew through the pipes here directly from the brewery, and people could talk freely here, as it was too noisy for the KGB to spy on them.

Our final stop will be where the Soviet era both started and ended: the former KGB headquarters, now a famous museum. It used to be said that one could see Siberia from there. Across the street, there used to be the biggest monument to Lenin in Lithuania — and here you will find out what happened to him when the Soviet era ended.

(If you’d prefer to travel as part of a regular group experience, please book our Soviet Stories of Vilnius group tour.)

For this Lonely Planet Experiences Private Vilnius Tour: Soviet Stories tour getting the required visa(s) is the responsibility for each individual traveller, as visa requirements vary depending on your nationality. We recommend to check with your local embassies representing the countries that you are travelling to, as part of this itinerary.

Vilnius City Hall, next to the Tourism Information Office.  Look for a guide wearing a black t-shirt with our BEST. DAY. EVER. logo, and a red ribbon showing Urban Adventures.

Gedimino Avenue, Lukiškių Square, next to the KGB Museum

NEED HELP OR HAVE A QUESTION ABOUT THIS TOUR?
If you have any question about this tour or need help with planning a trip, please do not hesitate to get in touch with us. We're ready to help.
Get help
hours 03 From US$ 381
Unlock US$ 19 in extra savings CHECK AVAILABILITY
Response Time: 3 hours Response Rate: 100% MAKE AN ENQUIRY