SAVE UP TO $1300
Unlock 5% Discount See all deals »
LIMITED OFFER ends in:
Request for call time received
You have successfully booked a call. Our travel consultants will get back to you around the requested time.
Okay, Got it!
BOOK A NEW YEAR 2020 CALL WITH OUR TRAVEL CONSULTANTS
Home  ›  Asia Tours  ›  Cambodia Tours  ›  Siem Reap Tours  ›  Adventure And Sport  ›  Bicycle Tours  ›  Khmer Empire Explorer By Bike 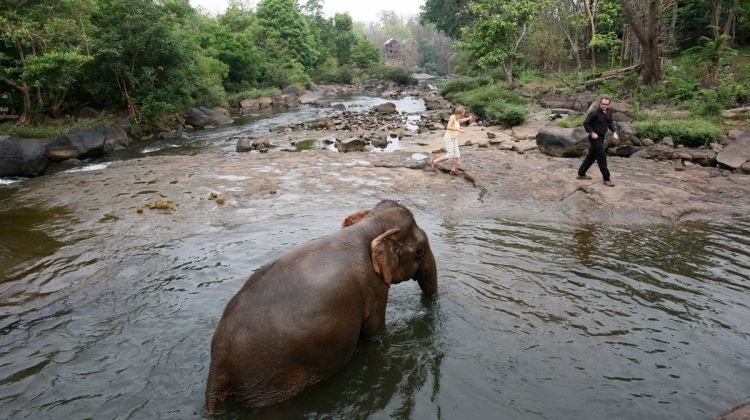 This unique multi country bicycle tour traces some of the far reaches of the Khmer Empire while also following the Mekong River from Thailand, through Southern Laos and into Cambodia, providing a perfect setting to experience the cultural heritage and scenic highlights of these three countries.

Our bike tour begins in Thailand but we quickly cross into Laos and first head up to the Bolaven Plateau, the coffee growing area of Laos, before heading south, where we see our first Khmer Hindu temple complex, Wat Phu. This temple is unique in that elements were bathed in water from a mountain spring. Heading further south we go island hopping and observe the daily lives of the farmers in the paddy fields and the fishermen on the Mekong River. We spend some time dolphin spotting and relaxing on an island in the middle of the Mekong before crossing into Cambodia.

After one more night on the Mekong we head to Preah Vihear, arguably the Khmer Hindu temple which has the most spectacular setting of all the temples built during the six-centuries-long Khmer Empire. Next we wind our way to Siem Reap, stopping en route to see the unique pyramid temple at the ancient capital of Koh Ker. Then it's time to explore by bike the Khmer Empire’s greatest legacy, the amazing Angkor complex which bears testimony to the immense power and wealth, as well as the variety of belief systems that the empire patronised over time - Hinduism, Mahayana Buddhism, and Theravada Buddhism.This Southeast Asia bike tour offers a glimpse of Thailand and the best of two countries by bike: Cambodia and Laos.

CUSTOMER REVIEWS
5 - Excellent
Based on 1 review
Excellent
5 - Excellent
“January was an excellent time to explore this area as the temperature was consistently around 30c. We had awesome local guides and drivers for each country. The terrain was a variety of tarmac, sand and trails through the countryside. The combination of biking, visiting sites and eating local food was a great way to explore these countries. We were also pleased with the variety of accommodation.

This was our fourth SpiceRoads tour. We appreciate the level of professionalism all staff display as well as the awesome planning that goes into all the trips to ensure the clients safety and enjoyment.”
ITINERARY Expand All
WHAT'S INCLUDED Download PDF Brochure
Accommodation
Meals
Transport
Guide
Bike Hire
WHAT'S EXCLUDED
Why Book with Bookmundi
What are customers saying about Bookmundi
Excellent
4.71 Average 278 Reviews

No additional cancellation fees apply for this Khmer Empire Explorer by Bike tour. You can cancel the tour up to 45 days prior departure and avoid paying the full amount, but your deposit paid is non-refundable. No refund applies for cancellations within 44 days of departure.

A deposit of 0 USD is required to confirm this tour. The remaining balance will be charged 44 days before departure. For any departures within 10 March 2020 full payment is required.

For this Khmer Empire Explorer by Bike tour getting the required visa(s) is the responsibility for each individual traveller, as visa requirements vary depending on your nationality. We recommend to check with your local embassies representing the countries that you are travelling to, as part of this itinerary.

Minimum Participants The minimum number of Participant for this trip is 2
NEED HELP OR HAVE A QUESTION ABOUT THIS TOUR?
If you have any question about this tour or need help with planning a trip, please do not hesitate to get in touch with us. We're ready to help.
Ask a question
Winter SUPER SALES Unlock Deal
days 00 From US$ 0
Sorry, this product is currently not available.
Response Time: 1 hour Response Rate: 100% MAKE AN ENQUIRY
Excellent 5 Based on 1 Review

Download Trip Notes Enter your email to get a PDF file containing all the trip information for the Khmer Empire Explorer by Bike tour.
Trip Notes Sent
We have sent the trip notes for this tour to:

If you book the Khmer Empire Explorer by Bike tour within the next 5 days, you can get by applying the following code: