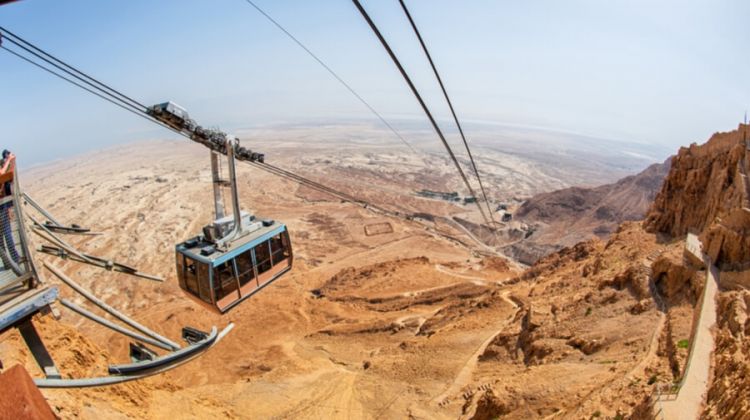 HIGHLIGHTS
Book this guided, group tour with us to visit Masada, the symbol of the ancient kingdom of Israel, and the Dead Sea from Tel Aviv within one day. Our representative will pick you up from your hotel in Tel Aviv in the morning. Take the route down from Jerusalem, descending below sea level through a Biblical wilderness towards the Dead Sea.

On the way, you will see the Inn of the Good Samaritan. Stop en route to take a look across the desert as you pass the point that marks the sea level. The ancient city of Jericho can be seen in the distance. This is where Joshua's troops caused the walls to fall (Joshua 6) and where Jesus healed the blind (Mark 10:46-52). Reach the shores of the Dead Sea encrusted with white salt and follow the shoreline towards Masada. Although it is possible to climb the ancient Snake Path up Masada as the Romans did 2,000 years ago, you will take the convenient cable car up to the mountain-top plateau. It was here that King Herod built a fortified palace complete with every convenience. Herod had also built a swimming pool, water cisterns, two palaces, store rooms and even a synagogue.

Following Herod's death, the mountain top was the last outpost of Jewish zealots when the Romans tried to rid the land of Jews in the First Jewish-Roman War from 66 AD to 73 AD. The Jewish zealots maintained their position for three years before the Romans finally managed to scale Masada using a ramp built by slaves. The 960 Jews didn't wait for the Romans to reach the summit. Instead, they killed themselves, becoming religious martyrs.

Masada was where the first parchment from this era was discovered during an Israeli archaeological excavation. On the parchment was the prophesy of Ezekiel, "…I will take the children of Israeli from among the nations…and bring them into their own land…." (Ezekiel 37). Heading back to the Dead Sea, you will pass the desert oasis of Ein Gedi, where David hid from angry King Saul, as well as Qumran, where the 2,000-year-old Dead Sea Scrolls were discovered in hillside caves.

Stop at the Dead Sea, the lowest point on earth and a contender for the title of one of the world's seven wonders, at the end of the day. People come from across the globe to enjoy its therapeutic, mineral-rich waters. Don't worry if you do not know how to swim. The high salt content will keep you afloat.

NEED HELP OR HAVE A QUESTION ABOUT THIS TOUR?
If you have any question about this tour or need help with planning a trip, please do not hesitate to get in touch with us. We're ready to help.
Get help
days 01 From US$ 120
CHECK AVAILABILITY
Response Time: 2 hours Response Rate: 100% MAKE AN ENQUIRY