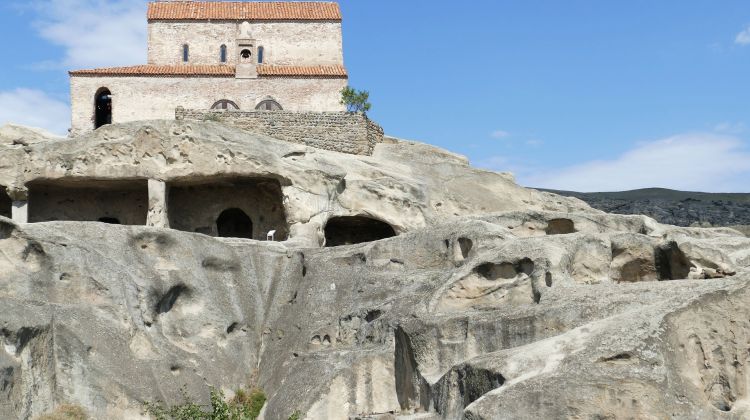 Tour with Flexible Booking Policy
HIGHLIGHTS
This Mtskheta, Gori and Uplistsikhe trip combines an exploration of Mtskheta, an ancient capital and religious center of Georgia, with the UNESCO World Heritage sites of Gori (the birthplace of the Soviet dictator Joseph Stalin) and Uplistsikhe, once an enormous cave city and one of the most important political, religious, and cultural centers of pre-Christian Kartli.

We will pick you up from your hotel in the morning. Drive past the fertile lands of Kartli region. Travel past the ancient capital of Mtskheta. Visit Gori, the birthplace of Joseph Stalin’s, and see his museum, which houses the items related to the dictator’s life.

Your next destination is the ancient town of Uplistsikhe, which dates back to the 6th century BC and is located approximately 20km east of the town Gori. The echoing halls, long, meandering corridors, chambers for pagan worship and even the remains of the oldest theatre in Georgia, all carved into the rocky plateau, are waiting to be explored by you.

Have lunch at a nearby restaurant after exploring Uplistsikhe. We will drive you back to your accommodation after the trip is over.
View More
WHAT'S INCLUDED WHAT'S EXCLUDED
Why Book with Bookmundi
What are customers saying about Bookmundi
Excellent
4.69 Average 340 Reviews

Other Practical InformationChildren must be accompanied by an adult Please advise any specific dietary requirements at time of booking A moderate amount of walking is involved Not wheelchair accessible Operates in all weather conditions, please dress appropriately Minimum Drinking age 18 years
NEED HELP OR HAVE A QUESTION ABOUT THIS TOUR?
If you have any question about this tour or need help with planning a trip, please do not hesitate to get in touch with us. We're ready to help.
Get help
days 01 From US$ 111 See Group Discount
CHECK AVAILABILITY
Response Time: 1 hour Response Rate: 100% MAKE AN ENQUIRY