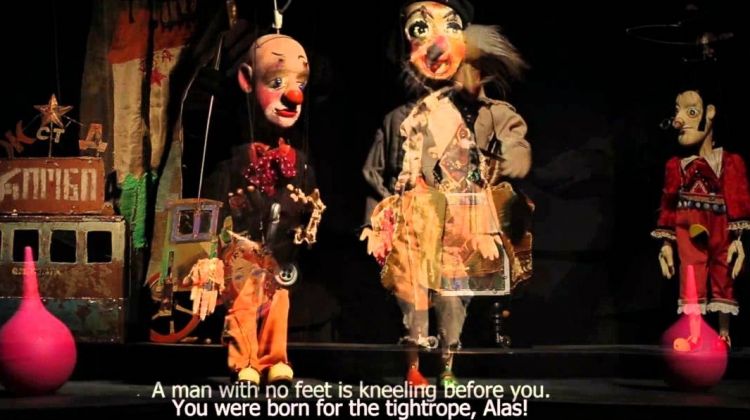 HIGHLIGHTS
Since opening in 1981, The Gabriadze Theatre with its unique building and magnificent tower has become an essential part of Tbilisi. Here you can enjoy the picturesque architecture, and amazing puppet show or simply have a pleasant time in Cafe Gabriadze.

Our guide will meet you on the reception of your hotel. We then start Tbilisi sightseeing tour in the Old Town. The city offers a wide variety of sights, most of them very ancient. Starting at the church of Metekhi, we walk to the brick domes of sulfur baths and then on to spectacularly located Narikala fortress - one of the oldest fortresses in Georgia, overlooking Mtkvari river gorge. After that we visit the synagogue, and the Sioni and Anchiskhati churches, which mark the end of the Old Town. Right next to the VI century Anchiskhati church we will have lunch break in Cafe Gabriadze unique and cozy atmosphere.

After the light lunch, later in the evening we will visit The Gabriadze Puppet Theatre to attend a marvelous performance. Though modest in size, The Gabriadze Theatre is among the world's preeminent cultural institutions. Presenting mature puppet performances full of depth and meaning, it has gained the respect and recognition of international audiences and critics alike.

Based in its home theater in Tbilisi, Georgia, the company is under the direction of a noted artist, writer, and director.The Gabriadze Theatre has toured extensively, its recent venues including: Lincoln Center Festival in New York; The Edinburgh Festival; Bogota Theater Festival; San Sebastian Festival, Spain; Toronto World Stage Festival; The Barbican Center, London; Theater de la Ville, Paris; The Kennedy Center Festival, Washington, D.C.; the Theatre Art Studio in Moscow.
View More
CUSTOMER REVIEWS ABOUT SAKURA LTD
4.5 - Excellent
Based on 10 reviews
Fah's review for another Sakura Ltd tour
5 - Excellent
“We are very happy with Sakura. I sent in the tailor-made tour request and received answer quickly. Despite my countless requests to readjust the program, Magda was very patient and helped adjusting until we got a perfect itinerary to suit our requirement, despite many completes on our requests. I compared Sakura with 5 more tour operators in parallel and Sakura won with the best itinerary, service, and price. Everything was very smooth. During the tour we also had a great time. Our guide Aneta is just the best. Very sweet, knowleadgeable, service-minded ,and has a super polished manner. The driver Mr. Zaza was also very nice. Though he drove a bit wild sometimes, I guest all Georgian do so. We had a great time for 7 days and nothing at all we could complain about. I would recommend Sakura to anyone.”
Gari's review for another Sakura Ltd tour
5 - Excellent
“Nous avons passé 10 jours en Géorgie grâce à un superbe voyage organisé par l'agence SAKURA.
Nous voudrions souligner l'excellent accueil et la gestion irréprochable que l'agence nous a réservé lors de notre voyage.