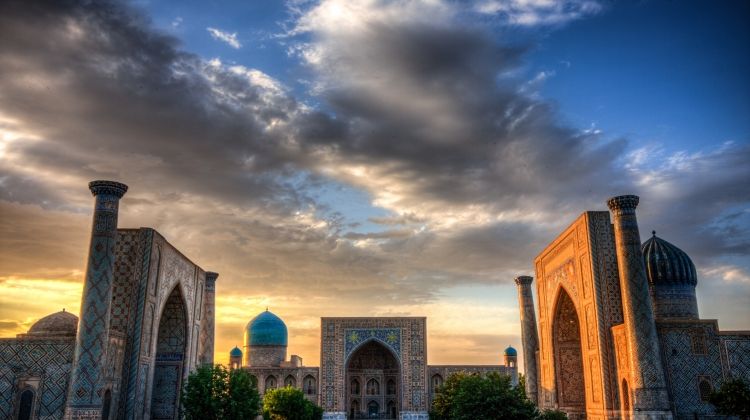 HIGHLIGHTS
Start in Tashkent and end in Bishkek, the THE FIVE STANS tour is a guided cultural, religious and historic sites trip that takes 21 days. You will visit Khiva, Tashkent, Merv and 10 other destinations in 5 different countries. THE FIVE STANS is a small group tour which will include accommodation in hotels, transport, meals and others. See below for further details.

Five Stans Tours from Adventures Abroad: What was once a part of the greatest trade route in the world, Central Asia and the Five Stans (Kazakhstan, Kyrgyzstan, Uzbekistan, Tajikistan, Turkmenistan) are a collection of countries with outstanding history, sprawling landscapes, and timeless beauty.

It is a place to get lost in cities that date back more than 2,000 years, with bazaars and markets in a constant state of buzz. A place to feel like a nomad in the sparsely populated grassy steppes with yurts for homes. Despite being five independent republics, it is a region best visited all together to understand how history and tradition can change a culture.

Starting in Uzbekistan, our Five Stans tours take us into the heart of Central Asia. Cities such as Tashkent are a blend of Soviet architecture with bland buildings leading to grand metro stations, before spilling out onto the old city fit with medieval madrassas, markets and mausoleums, while the superb museums showcase a rich history maintained after the devastating earthquakes and revolutions of the early 20th century.

Indeed, early on into our Five Stans tour one realizes it is also the five M's that will be visited: Madrassas or Islamic schools, markets, mausoleums, museums, and mosques. A city that seems to have stood still despite the passing of time, which encompasses all five 'M's would be Khiva, with its blue domed and tiled features found throughout the walled city. Nowhere feels closer to the Silk Road than here, with ruins and perfectly preserved elements found throughout this oasis city.

As the tour continues, Bukhara and Samarkand are often thought of as highlights as well. The enigmatic Registan Square in Samarkand with its three madrassas standing solemnly are often compared favourably with the Wonders of the World. Meanwhile the bathhouses and royal palaces of Bukhara make this feel like a living museum still in the age of the Silk Road.

While Uzbekistan tends to inspire, Turkmenistan can sometimes tend to mystify. With a capital city recreated in marble, it is also home to the worldÃ¢ÂÂs largest hand woven carpet and an interesting culture with an immense pride in horses. Certainly, it is an independent culture from that of the rest of the Five Stans with desert regions and ruins of Merv, a city that was once the largest in the world.

By the time our tour arrives in Tajikistan, we will once again prove how diverse this region is. Over the snow-capped and dramatic mountains, we arrive in the gardened capital of Dushanbe for a brief visit before moving onto the grassy steppes and mountains of Kazakhstan. Unlike the ancient cities of Uzbekistan, Almaty in Kazakhstan is relatively new after being built in the 19th century, and many of the features that came to the city during the Soviet Union are still embraced. From the Orthodox churches to the Soviet memorials, Kazakhstan moves at a much quicker pace than the other nations on our Five Stans tour.

The high mountain ranges continue, all the way into the landlocked Kyrgyz Republic. Another former Soviet country, this in an area with strong historical ties to the Silk Road and a long legacy lasting from the Mongol Empire.

From the ancient times to the present, the Five Stans are a destination for those curious of cultures that were once at the centre of crossroads for centuries.
View More

No additional cancellation fees apply for this THE FIVE STANS tour. You can cancel the tour up to 91 days prior departure and avoid paying the full amount, but your deposit paid is non-refundable. No refund applies for cancellations within 90 days of departure.

For this THE FIVE STANS tour getting the required visa(s) is the responsibility for each individual traveller, as visa requirements vary depending on your nationality. We recommend to check with your local embassies representing the countries that you are travelling to, as part of this itinerary.

NEED HELP OR HAVE A QUESTION ABOUT THIS TOUR?
If you have any question about this tour or need help with planning a trip, please do not hesitate to get in touch with us. We're ready to help.
Get help
days 21 From US$ 5,500
CHECK AVAILABILITY
Response Time: 2 hours Response Rate: 100% MAKE AN ENQUIRY

Tour is operated by : Adventures Abroad
Currently 04:24 in Richmond BC MAKE AN ENQUIRY Response Time: 2 hours Response Rate: 100%
Welcome back!