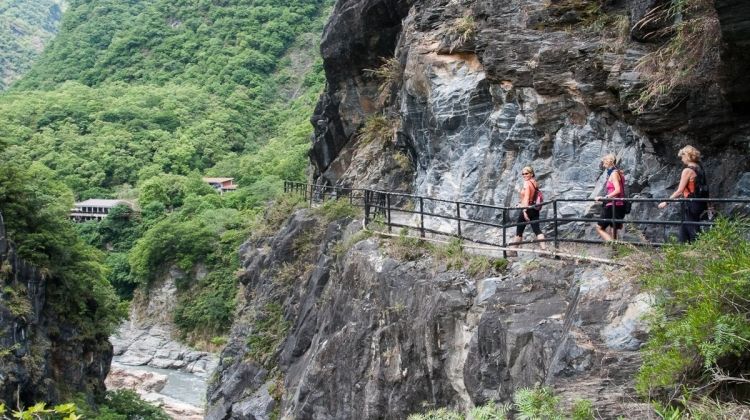 For the ambitious climbing enthusiast who’s ready to take on some of the best cycling terrain in the world, SpiceRoads presents: Taiwan Traverse. Over 900 kilometers of spectacular winding roads, extreme grades, 10,000 meters of climbing, and exciting descents make this a dream trip for cyclists up for the challenge.

Known for its hyper-modern coastal cities, the interior of the island of Taiwan is an assemblage of peaks. Two mountain ranges predominantly cover most of the island’s geography, the Central and Eastern Mountain Range, and you’ll traverse both of them on this challenging road cycling tour of Taiwan.

Beginning outside of Taipei, gear up for the real ride, with 4 of the tour’s most demanding days coming in quick succession. You’ll tackle peaks and passes, and test your legs on nearly 8,000 meters in this stage as you climb through the Central Mountain Range. The environment is raw and pristine, mostly populated by Taiwan’s aborigines, and we’ll make the most of the humble accommodations available in this remote region. But the best is yet to come. Day 4 culminates in a 60 kilometer descent through Taroko Gorge in the East Rift, a highlight of any trip to Taiwan and special experience to ride through it on two wheels.

A rest day exploring Taroko National Park gives the legs a chance to recover, before heading southbound along the coast and through the foothills, on a route lined with natural hot spring resorts- sure to become an integral part of your evening routine! Over the course of five days, you’ll make your way down the east coast of the island to the Kenting Peninsula and the southernmost point of Taiwan, now having navigated almost the entire length of the island. A final ride into the mountains again, into the aboriginal settlement of Wutai, bids the mountains goodbye as you head for Taiwan’s second city of Kaohsiung for departure.

Incredible and diverse scenery, welcoming local culture, and unparalleled cycling on fabulous roads with minimal traffic set the stage for one of the most challenging rides your legs are sure to remember for a long time to come!

No additional cancellation fees apply for this Taiwan Traverse by Road Bike tour. You can cancel the tour up to 45 days prior departure and avoid paying the full amount, but your deposit paid is non-refundable. No refund applies for cancellations within 44 days of departure.

For this Taiwan Traverse by Road Bike tour getting the required visa(s) is the responsibility for each individual traveller, as visa requirements vary depending on your nationality. We recommend to check with your local embassies representing the countries that you are travelling to, as part of this itinerary.

Minimum Participants The minimum number of Participant for this trip is 4
NEED HELP OR HAVE A QUESTION ABOUT THIS TOUR?
If you have any question about this tour or need help with planning a trip, please do not hesitate to get in touch with us. We're ready to help.
Get help
days 11 From US$ 3,650
Unlock US$ 183 in extra savings Sorry, this product is currently not available.
Response Time: 3 hours Response Rate: 100% MAKE AN ENQUIRY

Tour is operated by : SpiceRoads
1 Reviews
Currently 10:04 in Bangkok - Open Now MAKE AN ENQUIRY Response Time: 3 hours Response Rate: 100%
Download Trip Notes Enter your email to get a PDF file containing all the trip information for the Taiwan Traverse by Road Bike tour.
Trip Notes Sent
We have sent the trip notes for this tour to:

If you book the Taiwan Traverse by Road Bike tour within the next 5 days, you can get by applying the following code: