Supporting Ukraine together. Check our homepage for further details.
Customize a trip to Singapore Chat with a local travel specialist who can help organize your trip.
Start Here
Home   ›   Singapore Tours   ›   Singapore Travel Guide   ›   Great Singapore Itineraries: How Many Days to Spend?
Tweet

A tiny city-state at the entrance to the Strait of Malacca, Singapore is crammed full of attractions. The futuristic Marina Bay Sands, with its eye-catching triple towers, is the hallmark of the country and a reflection of the forward-looking attitude of its people, while the Old Supreme Court Building, Arts House, and Victoria Theatre hark back to its colonial past. Nature lovers can visit the open-concept Singapore Zoo, while foodies can explore its numerous hole-in-the-wall eateries that serve everything from Malay and Indonesian to Chinese and Indian dishes.

Three days are enough to tick off Singapore’s highlights. Start your exploration from the heart of the city, where colonial landmarks lurk beneath towering skyscrapers. Rub shoulders with bargain hunters in the city’s Chinatown, and follow the jet-set to Orchard Road, the epitome of shopping in the country. To the north of Chinatown is the Singapore Botanic Gardens, an oasis of greenery in one of the world’s most densely populated cities.

If you are looking forward to spending around five days in Singapore, do not forget to experience Treetop Walks at MacRitchie Reservoir and soak up the sun in Sentosa. With two weeks at hand, you can even incorporate Malaysia and Thailand into your Singapore itinerary. Attractions galore in Singapore for all kinds of travelers. But for those not keen on setting foot outside the city-state, we recommend spending five to seven days in the country.

An extended weekend in Singapore could start with a stroll through the busy backstreets of the city, gawking at attractions on the go. The shophouses of Chinatown are ripe with history while the bylanes of Little India are lined with shops selling everything from savory Indian desserts to dazzling saris. For art lovers, there is the National Gallery Singapore in the heart of the city, while nature lovers can stroll amid concrete supertrees at the Gardens by the Bay or visit Punggol Waterway Park which offers cycling and jogging tracks in a riverine setting.

Tick dozens off your bucket list during a five-day Singapore itinerary. Covering the colonial heart of the city does not take a lot of time. However, since you are already there, we suggest a trip to the National Museum of Singapore, which traces the history of the area prior to the founding of the country.

Next, head out to explore the themed zones of Universal Studios Singapore, the first amusement park of its kind in the region. Have your fill of haute cuisine amid the dazzling lights of Clarke Quay and take pictures beneath the giant Merlion in its namesake park. To the north of the city, along the Johor Strait, is Sungei Buloh Wetland Reserve, an 87-hectare wilderness reserve that is popular among birdwatchers, while to its south is the beloved Sentosa, a waterpark like no other.

A one-week trip to Singapore can be an extension of the five-day itinerary above with a couple of additional destinations. The iconic Raffles Hotel oozes sumptuousness and luxury, and houses stores selling luxury brands and restaurants offering exclusive dishes. The Singapore Flyer, yet another landmark, is one of the world’s largest observation wheels and offers panoramic views over the Singapore River, Marina Bay, and Raffles Place. Get the thrill out of being hurled 60 meters into the sky at 200 kilometers per hour at G-Max Reverse Bungy and soak up incredible views of the city from an overhead gondola. Having seen and done it all, why not head for East Coast Park where you can dive into the Singapore Strait and lay in the grass?

Those planning a two-week vacation in Singapore normally combine it with neighboring countries like Thailand, Malaysia, and Indonesia. Having soaked up the highlights of one of the world’s most densely populated territories, you can fly north to the historic port city of Malacca, known for its resplendent architecture and busy waterways. Further north from Malacca is the Cameron Highlands, a series of undulating hills covered with woodlands and tea plantations. Alternatively, take a ferry from the idyllic Langkawi archipelago to Satun, in Thailand, and continue to the tropical paradise of Krabi. Spend the final few days of your trip sprawled on the beach and explore one of the roughly 200 islands that dot Krabi’s coastline. For those keen on wildlife and jungle treks, Indonesia is just a stone’s throw away from Singapore. You can spot a variety of primates including orangutans in Tanjung Puting National Park in Kalimantan.

Check out our 2-week Singapore Itineraries for more information!

You might find our travel guide helpful if you are planning a trip to Singapore. For those interested in a customized trip, we suggest that you get in touch with one of our travel experts in the country. Interested in booking a package trip or joining a group? Check out our tours below.

Traveling to Singapore? Chat with a local travel specialist in Singapore who can help organize your trip. 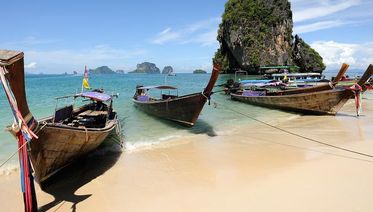 You may also want to see our tours and holidays in Singapore: