After suffering from years of civil war and unrest, the situation in Sri Lanka has finally become stable. For all the travel enthusiasts around the world, this is definitely good news. Sri Lanka is a tropical paradise with culture and history that spans centuries and is a treat for anybody who wants to visit. Sri Lanka is an all-year destination, but the weather systems in the country can be confusing. It is always best to consider when to visit Sri Lanka before you start planning your journey.

Sri Lanka is an island of immense beauty, one that has not drawn too many tourists in the past few years. It is an underrated tourist destination, but this means that you get to enjoy the island in relative peace, without having to worry about throngs of tourists and over-commercialization. From stunning cultural heritage sites to unexplored beaches, there is so much for the taking. All you need to know is the best time to visit Sri Lanka.

December - April is when to visit Sri Lanka if you want to tour the entire country. Between December and January, there will be rainfall in the north and the east. This is also the peak tourist season. You can also travel to Sri Lanka between September and November when there is little to no rain in the south and west parts of the country, and the crowds are lesser. This is the best time for backpackers visiting the country.

This is when to visit Sri Lanka if you want to visit during the high season, during the holidays. The weather in Sri Lanka is rather pleasant during this period. The Maha monsoon season will cause some rainfall in December and January, but not to a great extent. The southern and western parts of the country experience the driest period during these months. This is a high season, so book your tickets and accommodation in advance, especially if you’re going to be traveling in the urban areas.

May to August — Monsoon / Low Season

This is the period of the Yala monsoon or the southwest monsoons. The weather in Sri Lanka is rather wet, especially in the south-western parts of the country such as Galle and Colombo. This is a low season, as the main tourist regions are caught in the rain till July. By July, the rains start to taper off, leaving behind the occasional shower. However, the temperatures will be hot and humid in most parts of the country.

This is a great time to visit Sri Lanka, especially since the weather is amazing all over the country. These months are considered to be the ‘inter monsoon period, as they fall between the two monsoon seasons in Sri Lanka. The weather in Sri Lanka is comparatively drier in the south and west, as the Maha monsoon begins in October, and drenches the north-eastern parts of the country.

Traveling to Sri Lanka? Chat with a local travel specialist in Sri Lanka who can help organize your trip. 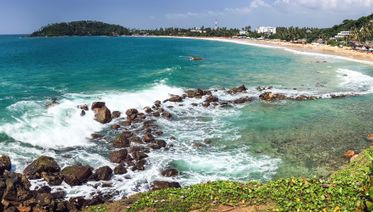 When to Visit Sri Lanka

Sri Lanka in January: All You Need To Know

Sri Lanka gets a brief break from its two bat ...

Sri Lanka in February: Travel Tips for the High Season

Sri Lanka is home to a rich trove of cultural ...

Exotic and alluring, Sri Lanka has been seduc ...

Sri Lanka in July: Season of Monsoon and Mists

Sri Lanka in June: Strong Hold of the Yala Monsoon

Sri Lanka in June is in the firm grip of Yala ...

Sri Lanka in August: The Last of the Yala Monsoon

Monsoon has largely subsided in Sri Lanka by ...

Sri Lanka in May: Travel Opportunities in the Monsoon

Tourist crowds are sparse across Sri Lanka in ...

Treat yourself to a captivating and inspirati ...

How Long to Stay in Sri Lanka

Great Sri Lanka Itineraries: How Many Days to Spend?

Although far less popular than neighboring In ...

7 Days in Sri Lanka: Our Recommendations

2 Weeks in Sri Lanka: Our Recommendations

Slightly smaller than Ireland, Sri Lanka is a ...

You may also want to see our tours and holidays in Sri Lanka: