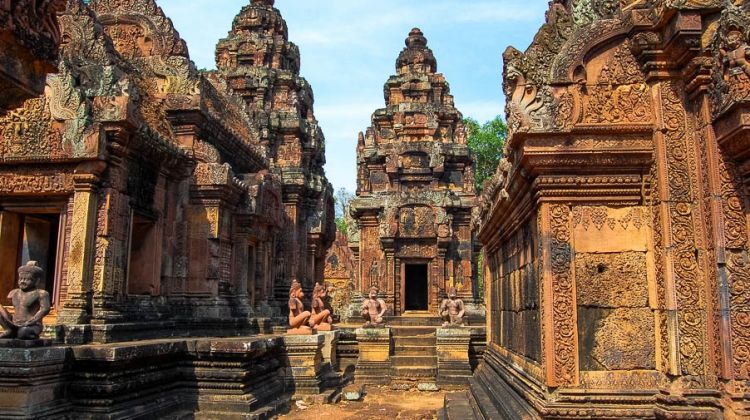 HIGHLIGHTS
We will pick you from your hotel at 8 am for a full day tour of Cambodia.

Your first stop is at Banteay Srey, a magnificent Cambodian temple that worships the Hindu god of Shiva. Located in the iconic Angkor complex, this temple is considered to be the Mona Lisa of the East. It is built entirely out of pink sandstones and has often been called the Temple of Women.

Next, we will visit Kbal Spean, a carved riverbed that was discovered by Jean Boulbet in the year 1969. Also known as “a thousand lingas river’’, Kbal Spean is located deep in the jungles to the northeast of Angkor. Several images of Hindu deities can be seen here and you also get to see mesmerizing lingas carved onto the river floor.

At 12.00 pm, we will enjoy a traditional lunch with many Khmer dishes. After lunch, we continue to Beng Mealea temple, a 900 years old that ranks as one of the largest temples of the Khmer Empire. Unlike Angkor Wat, this temple was ignored and was allowed to be lost to time. Today, the jungle can be seen devouring these beautiful ruins, tree roots and twisted vines taking over its ancient towers, courtyards and chambers.

The place literally feels like a lost world as you clamber and crawl over piles of moss-covered rubble and sprawling roots, occasionally coming across intricate carvings of Hindu or Buddhist motifs.

Finally, we will head back to the hotel at 17.00.
View More
WHAT'S INCLUDED WHAT'S EXCLUDED
Why Book with Bookmundi
What are customers saying about Bookmundi
Excellent
4.68 Average 348 Reviews

NEED HELP OR HAVE A QUESTION ABOUT THIS TOUR?
If you have any question about this tour or need help with planning a trip, please do not hesitate to get in touch with us. We're ready to help.
Get help
hours 09 From US$ 136 See Group Discount
CHECK AVAILABILITY
Response Time: 2 hours Response Rate: 100% MAKE AN ENQUIRY