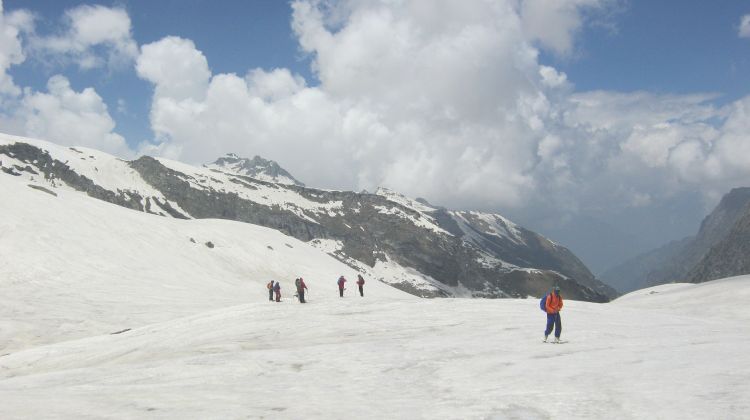 HIGHLIGHTS
The essence of this double-pass trek lies in its name. Take the challenge and join us in attempting to cross two-high altitude passes in the same expedition!

The Bhabha valley lies next to, but not strictly within, the trans-Himalayan terrain and its average rainfall is higher than in other parts of Spiti. There is a wealth of flora and fauna here and has been a subject of many researches. Pin Valley National Park was also established in 1990 to protect the Ibex which are found here in great numbers. The trekking route was only opened to trekkers in 1993.

The trek will start from Kafnu near Shimla and will finally end in Barshaini near Manali.

Other Practical InformationIt is strongly suggested that participants have an experience of at least one high altitude trek. Insurance is mandatory The participants must be reasonably fit and be able to cover 5 km of distance in 30 minutes without much stress. Participants should be able to carry a 10 - 15 kg backpack. Please ensure, for your own trekking pleasure you pack a big heart and only the absolute essentials. Before you start the trek, it is important that you understand the implications of high altitude on your body. Be aware of symptoms of AMS (Acute Mountain Sickness) like mild headache, nausea and general discomfort. If you feel any of these symptoms, inform the trek leader on priority and follow his instructions. Every campsite has as stretcher, fully equipped first aid kit, oxygen cylinders to address the situation. People with ailments like high blood pressure, asthma, heart issues and epilepsy are not recommended to participate on this trek. We humbly ask of you, never ever argue with your guides and instructors while on the trek. Remember, they only have your best interest in mind and any decision they take is taken keeping your safety and the success of the expedition in mind. Any and all decisions taken by the guides and instructors will be deemed as final. Be patient and respectful towards your fellow climbers. Remember, up there, you only have your wits and your fellow climbers.
NEED HELP OR HAVE A QUESTION ABOUT THIS TOUR?
If you have any question about this tour or need help with planning a trip, please do not hesitate to get in touch with us. We're ready to help.
Get help
days 19 From US$ 2,250
CHECK AVAILABILITY
Response Time: 1 hour Response Rate: 100% MAKE AN ENQUIRY