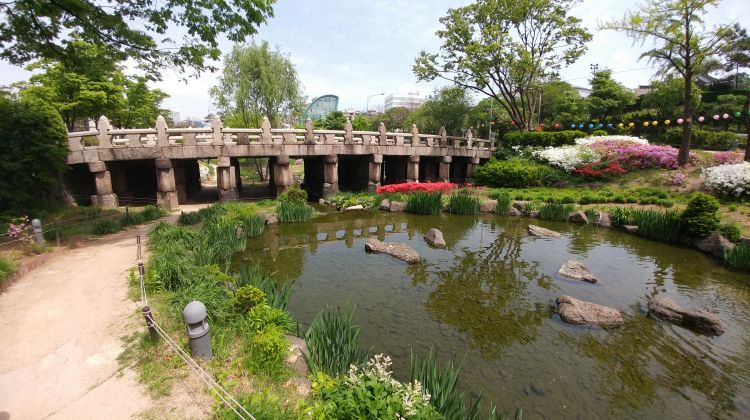 HIGHLIGHTS
Book this tour to see glimpses of what Seoul used to look like before urbanization. Your private, guided tour starts when the driver comes to pick you up at your hotel in the morning and drives you to the Dongdaemun Design Plaza, a project directed by the famous architect Zaha Hadid that was inaugurated in 2014 and comprises multiple undulating levels that house a gallery, museums, an exhibition hall, design workshops and an event hall.

Jangchungdan Park is on the itinerary next. Before becoming a park, it was a shrine built in the memory of the Korean soldiers who died trying to protect Gyeongbok Palace from the Japanese invasion. The shrine was removed by the Japanese occupation, only to be renovated and turned into a park in 1919.

Have a traditional Korean lunch after that and visit the Seoul City Wall and its museum. Formerly a wall protecting the capital of the Joseon dynasty, this wall was built in 1396 and has been rebuilt several times ever since. The museum displays historical artefacts related to the city and showcases the changes the city has undergone throughout ages.

After the fortress, it is time to travel to the Ihwa Mural Village, known for its street art. Ten years ago, the government wanted to demolish the neighborhood, which was considered unattractive, poor and ageing. But street art has provided a new lease of life to it. Visit the Secret Valley located in Seoul. A natural and historical site that has remained untouched, this is an excellent place to enjoy Korea’s natural beauty and learn more about its culture.

End your day tour with a cup of tea at Suyeonsanbang, a traditional tea house. The tea house was originally the workshop of the famous Korean author Lee Tae-Jun. Drive back to your hotel at approximately 5:00 pm.


View More
CUSTOMER REVIEWS ABOUT ONE DAY KOREA
4.5 - Excellent
Based on 14 reviews
Bianchi.'s review for another One Day Korea tour
5 - Excellent
“Great tour, great guide, and amazing country!!!!”
Ms' review for another One Day Korea tour
5 - Excellent
“This trip was Fantastic. We visited Koreas most famous places with our guide Justin, we particularly loved Gyeongju and the incredible Bulguksa temple. The whole thing went really well. Justin was always on time and knowledgeable. We experienced Korean traditional food like bibimbap, Korean pancakes and we even tried the famous live octopus!!!!
The car was very comfortable and clean. Justin is a very kind host and we would thoroughly recommend this trip.”
Maron.'s review for another One Day Korea tour
5 - Excellent
“We had a wonderful time with our guide, Jay. Started the day with pick up from our hotel at the scheduled time, Jay was very friendly, polite, and funny. He gave us useful tips and helped us take awesome photos.
I really liked Korean food. We tried mini rice rolls, noodles, raw fish and much more, all very tasty.
The highlights of this tour were Seoul and green tea field, such a beautiful view and things to discover.
You should definitely ask for Jay to be your guide during this tour, we highly recommend it!”
Read more One Day Korea reviews
WHAT'S INCLUDED WHAT'S EXCLUDED
Why Book with Bookmundi
What are customers saying about Bookmundi
Excellent
4.71 Average 318 Reviews

Other Practical InformationInfant under 3 years old is free of charge without meals, tea.
NEED HELP OR HAVE A QUESTION ABOUT THIS TOUR?
If you have any question about this tour or need help with planning a trip, please do not hesitate to get in touch with us. We're ready to help.
Get help
days 01 From US$ 129 See Group Discount
CHECK AVAILABILITY
Response Time: 3 hours Response Rate: 100% MAKE AN ENQUIRY